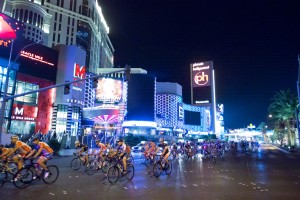 LAS VEGAS – At the end of a 122-mile trek along the bright lights of the Las Vegas Strip to the majestic heights of Red Rock National Conservation Area and cavernous Hoover Dam, Miguel Indurain led a charge to the finish amid a fast approaching peloton of professional cyclists including Carter Jones and Chris Baldwin of the Bissell professional cycling club.

Having retired from professional cycling in 1996, “Big Mig's” rare appearance proved to be a featured draw as the annual charity ride set a new attendance record of 2,500 cyclists eclipsing last year's mark by 500.

“I do not often travel outside of Spain, and I rarely ride in events in the United States, but Viva Bike Vegas was one that I just could not miss,” said Indurain, who traveled to Las Vegas from Spain specifically to participate in the Gran Fondo. “The vistas of Red Rock and the majesty of the Hoover Dam are so impressive. The rides I enjoy most are those whose scenery is so breathtaking that the ride is not only a great athletic challenge but also a once-in-a lifetime memory. Las Vegas is simply a great destination for cycling.”

“I am going to ride Viva Bike Vegas again next year so I lay down the challenge to former and current cycling champions to join me as we conquer this epic desert ride together.  It will be fun to create a rivalry and raise awareness for cycling here in Nevada and benefit the charities that need our help,” Indurain continued.

“We envision making Viva Bike Vegas the ultimate one-day cycling experience on the West Coast,” said Pinarello, who also rode in the event this year. “The course is simply spectacular and provides a challenge for cyclists at all levels. It was wonderful to see a true champion like Miguel test himself against the cyclists of today. We look forward to making next year's event even more exciting by working with our partners at the Regional Transportation Commission of Southern Nevada.”

In total, the fifth annual cycling event attracted 2,500 riders from all over the U. S. as well as internationally, from such countries as England, Spain and Canada.