The Tour of Utah stage race will visit communities along the Wasatch Front from Ogden to Payson, tackle the mountain elevations around Snowbird Resort, Canyons Village at Park City Mountain, and Woodward Park City, and ride a stage from dōTERRA headquarters in Pleasant Grove to Provo. 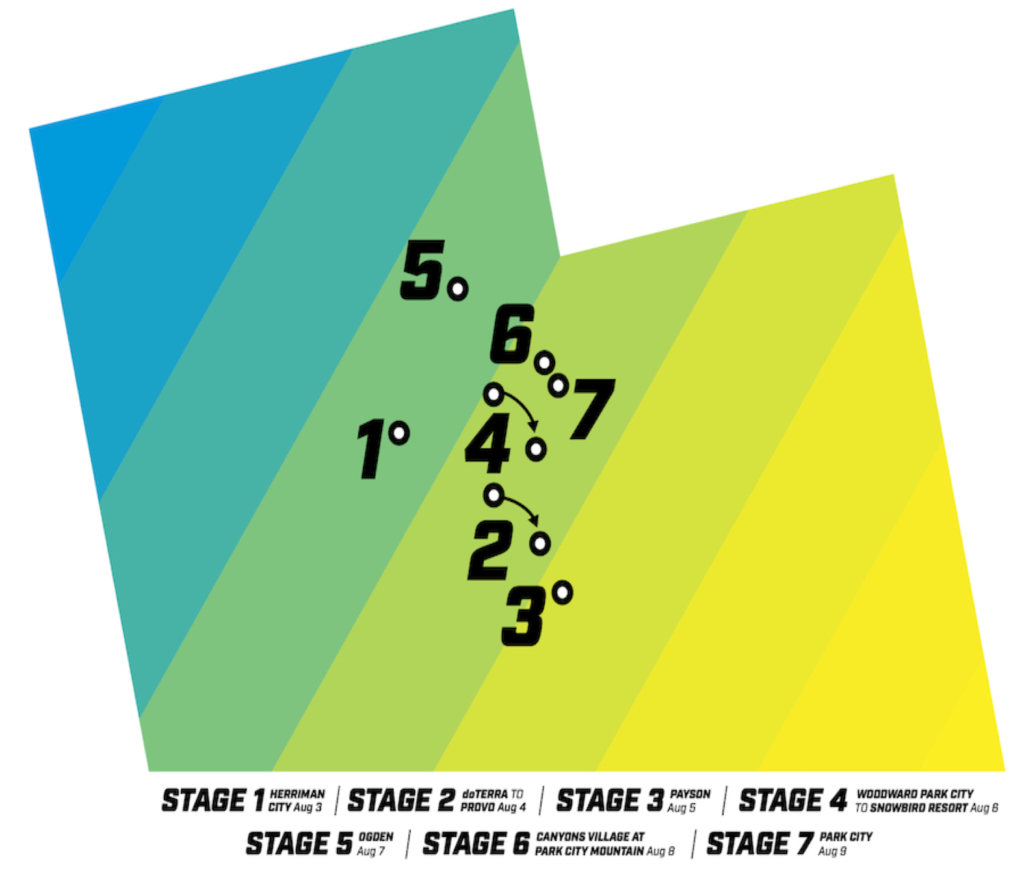 Now recognized as the only multi-day race in North America on the UCI ProSeries, the Tour of Utah strengthens this exclusive division of international racing by ensuring an optimal fit with the UCI WorldTour schedule. The Tour of Utah has been designated among the best HC (hors category) and Class 1 road races around the globe.

“Our designation as a UCI ProSeries race by the international cycling federation is new, but the Larry H. Miller Tour of Utah remains a crowd favorite and one of the most successful races in North America,” said John Kimball, managing director of the Tour of Utah. “We are fortunate to have welcoming host venues that roll out the red carpet, picturesque courses that show beauty and brawn, and a very supportive cycling community that enjoys watching great athletes. We look forward to bringing the Tour of Utah to the state and the world in August.”

Here is the lineup of Tour of Utah host venues for the seven race stages:

The 2020 Tour of Utah host venue video and additional information on the race is available at www.tourofutah.com. Details regarding each stage route, such as race mileage, courses, elevation gain, and start/finish times as well as KUTV2 Lifestyle Expo and local spectator festivities, will be announced in the late spring.

The Tour of Utah changes its geographical configuration each year to introduce the sport of cycling to new communities across the state, as well as present diverse courses for the professional athletes.

For the first time, Herriman City in southwest Salt Lake County will be a Tour of Utah host for the Team Presentation on Saturday, Aug. 1, as well as the overall start for the weeklong competition. Stage 1 presented by Zions Bank will begin on Monday, Aug. 3 at the Zions Bank Real Academy, the home training facility of Major League Soccer’s Real Salt Lake and United Soccer League Championship title holder Real Monarchs.

The Tour makes its inaugural appearance at the corporate headquarters of dōTERRA for the start of Stage 2 presented by dōTERRA on Tuesday, Aug. 4. The finish line will be in Provo, which previously hosted a Tour stage in 2011.

Stage 3 presented by Monster Hydro takes place with the start/finish in Payson on Wednesday, Aug. 5 and imposing Mount Nebo, the highest mountain in the Wasatch Range, as a backdrop.

The mountains will be featured in Stage 4 on Thursday, Aug. 6 between two ski resorts, both owned by adventure lifestyle company POWDR. First-time host Woodward Park City, a new action sports and ski resort with indoor and outdoor facilities, will serve as the start. Snowbird Resort, which has hosted more times than any other place at 13, will mark the finish line after a grueling six-mile climb in Little Cottonwood Canyon.

A circuit race will be held for the first time in downtown Ogden for Stage 5 presented by America First Credit Union on Friday, Aug. 7. This is the eighth time Ogden has been designated as an official host city, previously serving as a stage finish in 2015.

Racing will conclude with two days in Park City. Canyons Village at Park City Mountain, a four-season resort, returns for the start and finish of Stage 6 presented by University of Utah Health on Saturday, Aug. 8. The start/finish for the grand finale returns to Park City on Sunday, Aug. 9 with Stage 7 presented by the Utah Sports Commission. It is the 11th year Park City has served as a host city, and the eighth time it has hosted the overall finish of the Tour of Utah.

Now in its 16th year, the week-long Tour of Utah has earned the reputation as “America’s Toughest Stage Race.” The 2019 event crowned Belgian Ben Hermans of the Israel Cycling Academy as its champion, and EF Education First captured the team title after covering 477 miles of racing and 37,882 feet of elevation gain.

The Larry H. Miller Tour of Utah is free to all spectators, making professional cycling one of the most unique professional sports in the world today. In 2019, the race attracted 400,000 spectators during race week, featured 21 hours of national television coverage and reached more than 400 million homes via broadcast around the world.

Peddling Through Stone Town, Zanzibar – The Bicycle Art of Hadley...