August 3, 2017 – South Jordan, Utah – American John Murphy of the Holowesko-Citadel Racing Team presented by Hincapie Sportswear surged past the field in a wild west sprint finish to win Stage 4 presented by Workfront at the Larry H. Miller Tour of Utah. Traversing 125 miles of high desert before a climatic finish in South Jordan City, Murphy crossed the line in four hours and 22 minutes.

“I'm super happy to win at Utah, this is awesome,” said Murphy. “We had control with 3K (kilometers) to go, our boys were on the front and it was looking good. But I think we all knew that it was going to be a little bit too early. With 1K (kilometer) to go, UHC took over with [Seba] Haedo and [Travis] McCabe and I sat behind them. I think they opened the sprint up a little bit too early and I stayed patient. We knew that (the finish line) was a long way from the last turn. Three or four guys came by me, wow these guys were going super fast, but I stayed patient. A little hole opened up in the last 150 meters and I was able to get through it and do my sprint.”

“Hard race all day. We had one guy in the breakaway, and the team stayed relaxed in the group. I stayed in the front in the last two laps of the circuits. It's a hard sprint, it's very fast and I don't know why I finished second place,” Rodriguez commented with a laugh. “I'm happy.”

Thumbs up! Stage 4 of the 2017 Tour of Utah, South Jordan to Cedar Fort and back to South Jordan, Photo by Cathy Fegan-Kim, cottonsoxphotography.net 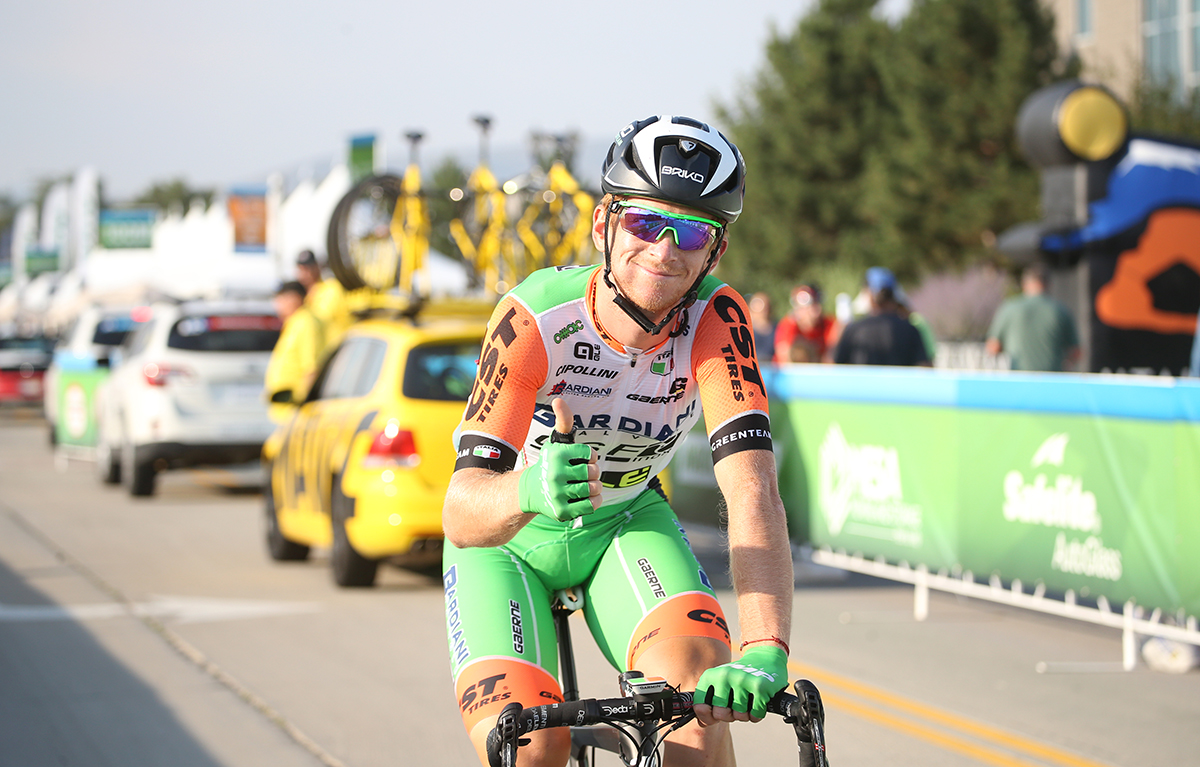 Thumbs up! Stage 4 of the 2017 Tour of Utah, South Jordan to Cedar Fort and back to South Jordan, Photo by Cathy Fegan-Kim, cottonsoxphotography.net

It is the second stage win for the Holowesko-Citadel team, with Ty Magner (USA) capturing Stage 1 presented by America First Credit Union in Logan. Murphy added, “We were very happy already with Stage 1 with Ty and the yellow jersey, so that's why you didn't see us take control. We gambled a little on today's stage.”

Riders in the 124-rider field battled each other and the scalding temperatures through the Rush Valley, passing the Oquirrh Mountains. Dynamic and chaotic racing marked the first hour and a half until the six-rider breakaway was finally established.

The first move, initiated by American Tyler Williams of Israel Cycling Academy, came 11 miles into the stage. Relentless attacking continued, with the yellow jersey Britton participating at the front. Rally Cycling wanted to make sure that the right combination of riders and teams were allowed up the road, while sprinters teams were shutting down any move that included sprinters.

The field was still together as they approached the first of two Utah Sports Commission Sprint lines in Cedar Fort. Led out by his Axeon Hagens Berman team, Chris Lawless (USA) opened his sprint first, but deviated from left to right of the road forcing Raïm in the gutter. After review, officials relegated Lawless, giving top points to Raïm. Lawless' teammate Rui Oliveira (POR) was second and Ty Magner (USA) of Holowesko l Citadel Racing Team third in that sprint.

Raïm described the incident as “nothing special.”

“We were going for the sprint, he probably didn't see me, but also he wanted to gamble a little which is normal in cycling to block the others. But it was just a little bit too much I think. I couldn't pass him on the right side and he pushed me a little bit and I couldn't finish my sprint,” he noted. “Those things happen. He came to me and apologized afterwards so all is good.”

Britton's team remained in control, letting the gap extend to a maximum of five minutes and 30 seconds before slowly reeling them in. Heat was definitely a factor with riders dumping water on their heads and putting iced-filled socks down their back to cool their body temperatures.

With 90 miles to go, under orders from his Israel Cycling Academy team director, Turek stopped working in the break, causing an uproar with his break companions. Seven miles later, Rota took a flyer off the front, was soon joined by Gonzalo Serrano Rodriguez, and the duo dug deep in a desperate but doomed dash for victory. The field was all together as they entered the first first of two finishing circuits in South Jordan. Rota was awarded the Larry H. Miller Dealerships Most Aggressive Rider jersey for his efforts.

Teams continued to battle for position on two laps of the 3.5-mile circuit in South Jordan. American Travis McCabe of UnitedHealthcare launched his sprint with 800 meters to go, but faded to take sixth on the stage.

“I had two teammates who were leading me out. Personally, I think we started too far back to sprint. We were coming fast, but with 1K (kilometer) to go, we were 45th position I think. I had good legs for the sprint. Probably I was the fastest guy today, but I wasn't the best. These two guys (Murphy and Rodriguez) were better than me,” Raïm added.

Veteran Murphy had experience on his side. “These sprints are crazy, we knew that it was going to be very fast. I opted for a bigger chain ring because we knew how fast it was going to be. I'm super happy. Not super surprised because if you can take experience into these sprints, you can do more than your speed allows. You're able to make some moves, knowing when to be where, when to wait and when to go.”

Eric Young (USA) of Rally Cycling, who sprinted to stage wins at this race in 2014 and 2015, was voted America First Credit Union Fan Favorite for Stage 4 presented by Workfront, in the category of Best Sprinter. Jacob Rathe (USA) of Jelly Belly Cycling presented by Maxxis retains the Utah Office of Tourism King of the Mountain jersey and Neilson Pawless (USA) of Axeon Hagens Berman Cycling Team will continue in the WCF Insurance Best Young Rider jersey.

Stage 5 presented by Zions Bank returns to Davis County on Friday, Aug. 4 for a third consecutive year. New for 2017 will be an inaugural stage start in Layton. The 112-mile course will roll through Hill Air Force Base for the first time, passing the Hill Aerospace Museum, the largest museum west of the Mississippi River. After two crushing climbs across the Bountiful Bench, each designated with a Utah Office of Tourism KOM, the 4,200-feet of climbing of the stage will end on Main Street in Bountiful.

Christina Birch selected for the NASA Astronaut Class of 2021

Antelope Island: A Californian’s Utah Bicycle Adventure in the Time of...