ROSHEIM, France (July 29, 2022) — Another intense day of racing, and another victory for Marianne Vos (Jumbo-Visma) on the roads of the Tour de France Femmes avec Zwift! The Dutch icon dominated the sprint in Rosheim after the rolling course of the day and many attacks had reduced the bunch to some 50 riders. This time, she outsprinted Marta Bastianelli (UAE Team ADQ) and Lotte Kopecky (SD Worx), able to make it to the stage podium despite being involved in the crash that took Lorena Wiebes (Team DSM) out of the battle for the stage win. Vos’ results since the start of the Tour are impressive: 2nd, 1st, 2nd, 5th, 3rd and 1st again.

Many riders have identified stage 6 as the last opportunity for long range attacks ahead of the final week-end over the Vosges summits… And it naturally leads to an intense battle from the start of Saint-Dié-des-Vosges, with 129.2km to cover on a rolling course towards Rosheim.

Maaike Boogaard (UAE Team ADQ) opens a small gap on the first ascent of the day, the cat-4 Col d’Urbeis (summit at km 19.2) but she’s reeled in at the summit, where Femke Gerritse (Parkhotel Valkenburg) takes 1 QOM point to defend her polka-dot jersey. 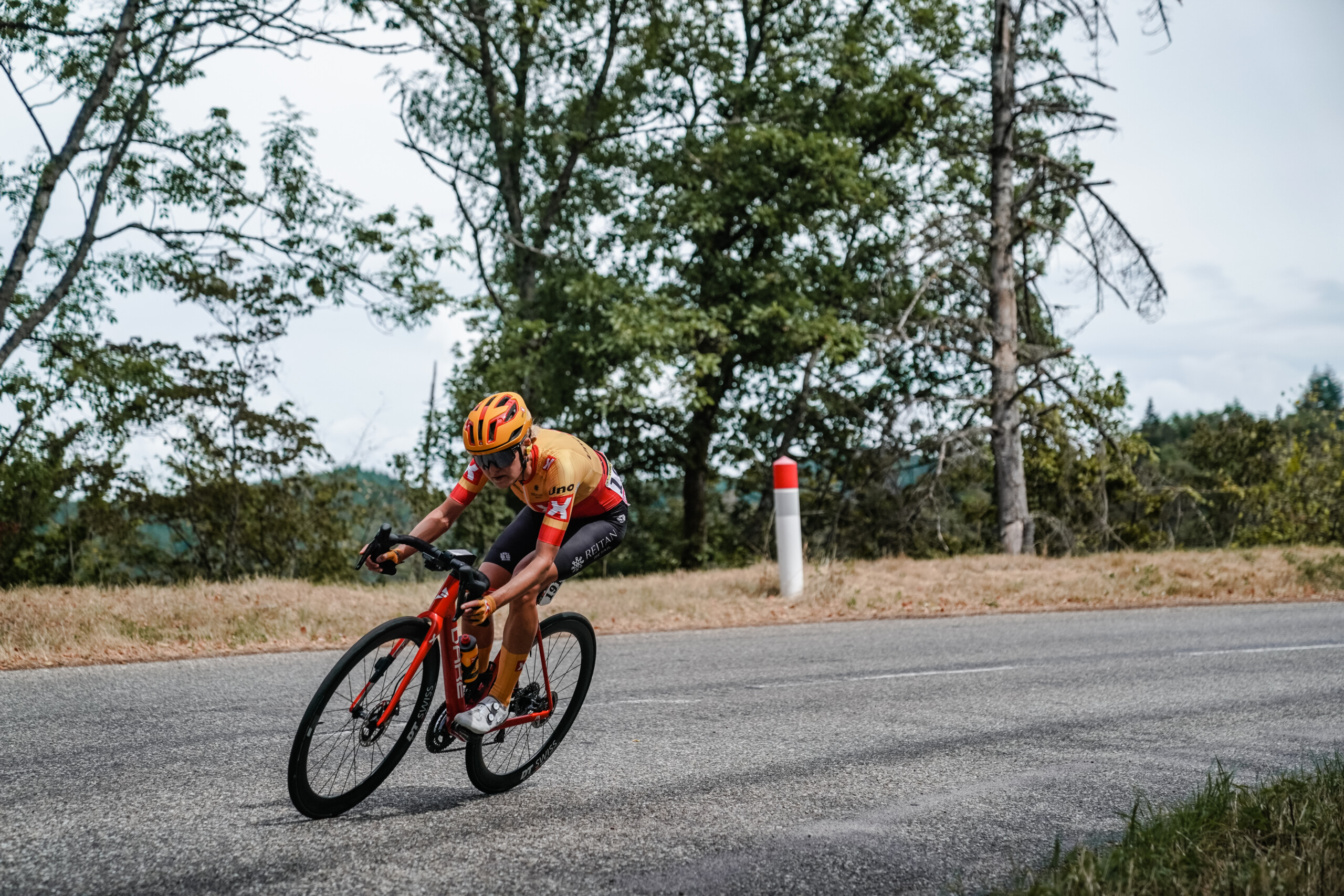 Femke Gerritse: “I hoped I would be in the break and take some points but they didn’t let me. After the first climb I knew I still had the jersey tomorrow so it was celebration time! Today I received more congratulations from the peloton because yesterday was chaotic. Today was easier so they came to me, they told me: ‘It looks good on you’. The dream is to wear it on Saturday, because then you can ride the Grand Ballon with this jersey. That would be very nice.”

Action also unfolds at the back, with Elisa Longo Borghini suffering a mechanical on the following downhill. Trek-Segafredo call three teammates back to help her return to the bunch at km 37.

Lowden is the strongest on the cat-4 Côte de Klingenthal (km 59.7) and the cat-3 Côte de Grendelbruch (km 67.7) to claim 5 QOM points. In the bunch, UAE Team ADQ and Valcar-Travel & Service control the gap around 2 minutes.

Wiebes and Kopecky go down

The gap is down to 1 minute when Cordon-Ragot attacks inside the last 30km. Vandenbulcke also has a go and Hammes powers to the line of the bonus point (km 101.5). Grace Brown (FDJ Suez Futuroscope) sets a strong pace in the bunch and they only trail by 30’’ into the last 25km.

Henderson attacks on the way down and the breakaway explodes. Meanwhile, Lorena Wiebes (Team DSM) and Lotte Kopecky (SD Worx), two of the stage favourites, suffer a crash. They get back up but lose time and the pace in the bunch drops down.

The attackers get back together for the last 20km, except for Koch. Team DSM set a strong pace in the bunch, despite Wiebes’ crash. Henderson attacks again and a leading trio emerges for the last 15km with Le Net and Lowden. Kopecky returns to the bunch and Audrey Cordon Ragot drops back to help the chase in the peloton, trailing by 45’’.

Le Net goes solo on the final ascent of the day, with 10km to go. Over the top, she has a lead of 24’’ to the bunch, led by Ellen van Dijk (Trek-Segafredo) after an unsuccessful attack by Liane Lippert (Team DSM).

Le Net is eventually caught with 5km to go. Jumbo-Visma and Trek-Segafredo set the sprint in the fast run-in to Rosheim. And Vos powers to victory, again.

Marianne Vos: “The sprint went pretty well. We wanted to be in the front in the final u-turn with 1.7km to go. We knew that was going to be very important and we wanted to stay out of trouble. There was a bit of confusion when Elisa Longo Borghini went left but luckily things went well and when Lorena Wiebes opened up her sprint, she was just the fastest. We did what we could, getting 3rd and keeping yellow, it's a good day. I expect some fireworks tomorrow, but we’ve seen that every day. We’ll try do our best again and of course with the yellow jersey you want to give it all you have.”

Lorena Wiebes: “It was a pretty chaotic finale. We aimed for the u-turn with 1.7km to go and Pfeiffer [Georgi] brought me safe to the good wheels. We had a lot of speed into that corner and I lost my back wheel a bit but I could hold my bike, I was still in a good position out of the corner and then I was able to react to the girls coming from behind and to ride the sprint as I wanted to. I think it was the longest race I ever did. If you add up the neutral, it’s almost 180km, I didn’t even do that in training. The team took great control and Franziska Koch did a great job. I felt a bit of pressure when I saw it and it was maybe the last opportunity for me. I’m very happy I took it, it was a real team effort.”

Emerson and Beyer Top the Podium in Utah’s 2017 East Canyon...