By Don Scheese — The more passionate an author is about their subject, the more readable the book. Make no mistake: Jody Rosen is passionate about the bicycle. In this wide-ranging, far-reaching social history, he traces the invention and evolution of the muscle-powered wheeled machine, from its first iteration in 1817 with the appearance of the Laufmaschine, or draisine, created by Karl von Drais, in Germany, to exercise or stationary bicycles aboard the International Space Station. A former bike messenger and currently free-lance writer, Rosen gifts us bicycle freaks a fascinating take on what the French called the “velocipede.”” 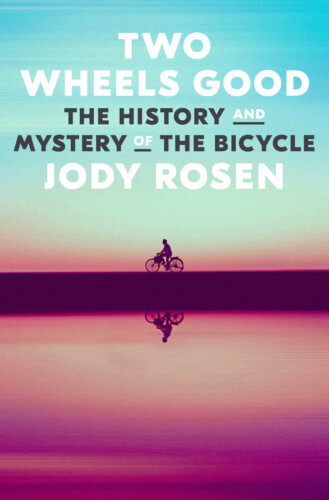 How many bicycles exist in the world today? How much more efficient is it to travel by bike as opposed to walking? Which country in the world has the greatest number of bicycles? What effect did the 1989 Tiananmen Square protests in China have on bicycle use in that country? How did the Covid-19 pandemic affect the production, purchasing, and usage of bicycles worldwide? Why did certain bicycle manufacturers stop the sale of bicycles to police departments after the Black Lives Matter protests following the killing of George Floyd? Answers to all these questions, and many more, are provided in Two Wheels Good.

Granted, some of the history of the bicycle Rosen chronicles is familiar territory to aficionados (see David Herlihy’s exhaustive, and exhausting, tome Bicycle: The History, 2004). For example, it is common knowledge of American history how much the bicycle contributed to the rise of the women’s movement and the so-called “New Woman” In the late 1800s. The author quotes the now-famous proclamation by Susan B. Anthony: “Bicycling…has done more to emancipate women than anything else in the world.” But Rosen explores this historical trend much deeper. In a chapter entitled “Bicycle Mania,” he provides an entire catalogue of snippets from turn-of-the-century periodicals, many of which deal with rising divorce rates allegedly caused by women neglecting their matronly duties because of their obsession with riding a bicycle. Don’t believe me? Here is one sample from an 1899 Akron Daily Democrat article:

“Chris Heller has filed a petition in Common Pleas Court asking for a divorce from Lena Heller. He alleges gross neglect. To substantiate this, he says that she refused and neglected to keep house or prepare meals. He says his wife is a victim of the bicycle craze and that she spends nearly all her time riding her wheel in company with people who were strangers to propriety.”

Where there is a bicycle, there has always been a backlash. When bicycle riding reached its first zenith in the late 1800s after the invention of the “safety bicycle” (two wheels the same size, driven by pedals and a chain drivetrain, ridden on rubber tires), this newfangled artifact was decried by the horse industry, which feared—rightly so—that it would soon eliminate the need for equestrian-powered vehicles. (Ironically, some of the nicknames for the bicycle upon its appearance were “the Silent Steed” and “the hobby horse.”) Even before that, many commentators expressed outrage over the high speed and reckless antics of the “Dandy Chargers,” riders on earlier versions of the velocipede piloted by members of the upper class, the few who could afford such an expensive machine. And today, of course, animosity towards cyclists and cycling infrastructure such as dedicated bike lanes may be at an all-time high, as exemplified by the “bicycle hater” P.J. O’Rourke, with whose vitriolic words the author actually opens his book: “Mankind has invested more than four million years of evolution in the attempt to avoid physical exertion. Now a group of backward-thinking atavists mounted on foot-powered pairs of Hula-Hoops would have us pumping our legs, gritting our teeth, and searing our lungs as though we were being chased across the Pleistocene savanna by saber-toothed tigers.”

Like any good bicycle ride, this book takes us to new and unexpected places. Personally, I really liked the edginess of some of the topics addressed. Maybe I’m naïve and lead a sheltered existence, but I had no idea there was such a thing as “cycle-sexuality.” In a titillating chapter entitled “Put Some Fun Between Your Legs,” Rosen takes up the topic of the erotica of bicycle obsession: Internet porn featuring (you guessed it) people having sex on, and with, bicycles. And did you know about the World Naked Bike Ride, held in cities across the globe, a countercultural event whose purpose, according to the founders, is to “declare our confidence in the beauty and individuality of our bodies”? Then there is (in)famous author Henry Miller’s love affair with a French racing bike, as recounted in his memoir My Bike and Other Friends. So enamored is he of his two-wheeler that he lovingly cleans and caresses it each day, causing his mother to fret over whether he might take it to bed with him.

Or consider the chapter “Beast of Burden” in which Rosen, worldly traveler that he is, spends time in Dhaka, the capital of Bangladesh, where he befriends a rickashaw driver whose name is Badshah. Dhaka is one of the most densely populated, polluted, and impoverished cities in the world. It is also considered to be the rickashaw capital of the world, a teeming metropolis where there are relatively few roads and sidewalks are taken up by vendor stalls and curbside shanties. Now in his fifties, Badshah has been a rickashaw driver for over a decade. He was born in a rural part of the country, then forced to move to the city for economic opportunity. As a rickshawallah he makes a relatively decent living (for Bangladesh), earning about five dollars a day, working from ten in the morning till eight at night, hauling passengers around the teeming megalopolis, which only grows larger as rural residents, displaced by famine and natural disasters, are (like Badshah) forced to migrate to urban areas.

Then there is the chapter “Bicycle Graveyards.” In cities across the world—Paris, Amsterdam, London—where there are bodies of water, there are discarded bicycles, inundated and thus invisible until rivers and lakes and canals are periodically drained. This seemingly inexplicable phenomenon has only increased with the proliferation of bike-share companies providing rental bikes to residents and visitors in urban areas—Citi-Bike, Nice Ride, Bikeshare, etc., etc.—resulting in new forms of vandalism springing up. Why not toss a bike you just rented in a body of water, just for the hell of it? Resignedly, Rosen writes: “A bicycle is a durable good, but it’s also a disposable one: it’s easy to get rid of, if you don’t mind being a little antisocial about it.”

“Everything is political,” the truism goes. The bicycle is no exception. Its manufacture is tied to colonialism: where do we think, if we think at all, that the rubber, steel, and plastic parts of the bike come from? From former and present colonies of First World countries like Belgium, England, France, and the United States. Political protests in recent years, like at Tiananmen Square and at Black Lives Matter gatherings across America, are intimately associated with bikes and bike riders; government military tanks crushed hundreds if not thousands of bicycles in quashing the rebellion in China, and BLM supporters often rode their bicycles to scenes of protest while police used their bikes as blockades and offensive weapons. It should come as no surprise that Black and Latino bicyclists in low-income neighborhoods are the racial groups most often stopped and cited by authorities for minor infractions like riding on the sidewalk. And during the height of the Covid-19 epidemic, when social distancing became the norm and restaurants were forced to close down, hazard a guess as to who made possible the take-out craze: Deliveristas, bike delivery workers paid low wages risking their own lives while supplying food for the masses.

Some might accuse Rosen of political correctness here, of taking an invention seemingly as innocuous as the bicycle and injecting the topic with a healthy dose of “woke” politics, but like any good writer he sheds light on his subject in ways the reader perhaps never before considered.

Finally, there is the chapter “Personal History.” Throughout the book Rosen provides a New Journalistic first-person take on various topics. Here he goes full-on autobiographical–refreshingly so. Who as a cyclist has not thought about their ur-moment, their very first ride on a bicycle? Who has not recounted their own history of bicycles and bicycling through the years? Reading this chapter, I recalled my very first bike—a recycled and repaired klunker my father rescued for me from the local dump. Then, instead of the Stingray I longed for, my parents bought me a 10-speed, an English Huffy, quite popular in the 1960s and ‘70s. My first real bike, purchased during my college years, was a Peugeot PX-10, with a classic white Reynolds 531 frame, triple chainring, and Simplex derailleurs. I rode this beauty down the mean streets of Philadelphia, sans helmet, dodging malicious taxi and SEPTA bus drivers, avoiding treacherous trolley car tracks, constantly vigilant over the terrifying prospect of getting doored by some blithely unaware motorist or car passenger. A few years later, after a cycling hiatus, came several mountain bikes, provided by the U.S. Forest Service, while on fire patrol in the Idaho mountains. Then followed my cycling renaissance, during the height of the Lance Armstrong years, when every middle-aged male in Lycra (MAMIL) bought and rode obsessively an expensive carbon framed machine. Rosen’s own cyclo-history is equally interesting, especially his account of bike messenger years in Boston, and he concludes this chapter with touching tales of teaching his own kids to ride their bikes.

Just to be clear on what this book is not about. It is not a history of cycling as a sport—no Tour de France accounts here. Nor is it a history of mountain biking (though there is an engaging chapter featuring the daredevil stunt-cyclist Danny MacAskill). There are plenty of good reads about those subjects elsewhere. What this is, is a thoroughly engaging, idiosyncratic and personal, history of the world’s greatest invention.

What is the State of Biking in the West?