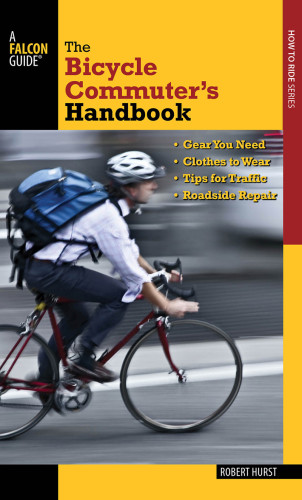 I will paraphrase the “About the Author” citation by Falcon Guides. “Robert Hurst is acknowledged by most experts to be the most complete, realistic, and readable source available for information and tips about cycling in traffic”. Given my decades of bike commuting I will humbly place myself in the “expert” category, as vague as expert is defined, and concur with the opinion. Mr. Hurst’s books update to the current time previous books on bicycle commuting by John Allen (The complete book of Bicycle Commuting; 1981) and John Forrester’s Effective Cycling, first published in 1976.

The Bicycle Commuter’s Handbook is just that, a handbook measuring 4 X 7 inches containing 90 pages. If one is interested in a more complete book on the subject of bike travel, I would suggest The Art of Cycling, also by Robert Hurst. The Bicycle Commuter’s Handbook is more of a “nuts and bolts” type of book. For example, he spends 8 pages briefly discussing the types of bikes with their inherent pros and cons from mountain bikes to cruisers to bike sharing programs. He doesn’t give any detail on what he would call an ideal commuter bike but that is not the intent. The 8 pages are quite informative for someone looking to see if the bike he (or she) owns is suitable for commuting.

Part III of the book is particularly good. It is entitled “The Ride”, giving a general overview of how to ride your bike safely, a section that many bike commuters, should read. Part Five will be interesting to most cycle commuters as it discusses the basic routine maintenance. It is limited to adjusting the drivetrain and brakes plus the prevention and repair of flat tires. After reading the 9 pages, including pictures, of the step-by-step instructional guide for flat repair, you should never have to use your phone to call for help. Mr. Hurst also addresses the age old dilemma, is it cheaper to routinely replace the chain to prevent excess wear on the rear cogs and chainrings or should one just ride until the entire drivetrain needs replacing. So I don’t give away too much, you can read it in the book or send an email to me [email protected] for his analysis. I should note that Parts I, II, and IV are also very good, probably more useful to the beginning commuter than the bike commuter with years of experience.

A Bicycle Tour from Salt Lake To Yellowstone and Back

Where Should You Ride to Avoid the Effects of Air Pollution?