By Lou Melini — Paul Maunder is a writer and a cyclist. He has combined his profession and his passion to write The Wind at my Back, which the New York Times would likely characterize as a good summer read. 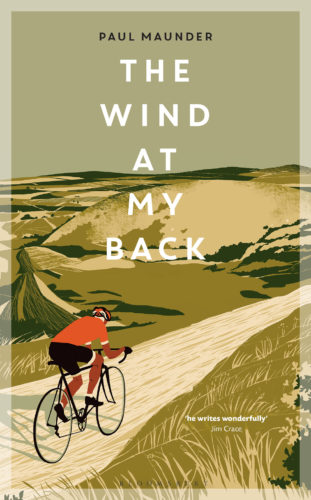 I define a “good summer read” as a book that is well-written and holds some interest, but that you can easily put away, perhaps for a couple of weeks, and then pick up the book again to continue reading without feeling like you need to start over. In general, there isn’t much to this book that would push you to read it quickly.

Mr. Maunder intersperses non-cycling info about his life, of his home country of England, and other tidbits of information throughout the book to break up what is primarily an autobiographical account of his life on the bike, as implied by the book’s subtitle, “A Cycling Life.”

This style of writing is familiar to me, as it brings variety to what would be a one-topic book, a very short book. In my opinion, for this style to be successful, a large portion of the sub-topics need to be as interesting as the primary. Unfortunately, in this, Mr. Maunder didn’t quite succeed.

The writing that was about cycling was good and held my interest.

“Most Saturday mornings he and my father would go for a ride and sometimes I’d tag along. They rode side by side, chatting, while I tucked in behind, sheltered from the wind, listening to their conversation and watching the miles slip by. John had something of the fifties cycle tourist about him. He rode a dark green bike, always clean and well maintained. From his saddle hung an old but robust Carridice saddlebag of black canvas and leather …”

At a later age:

“From the first pedal stroke I was climbing. Soon out of the village, legs complaining at being asked to work so hard, the road turned gently back and forth. The gradient was manageable but unrelenting. As my muscles began to soften, sweat rose to my skin, then began to bead on my forehead and run down from my temples.”
You may have noted in the above paragraph that the saddlebag is made by Carridice, a British company. Mr. Maunder is from and the book is set in England. I could relate to his rides through the countryside, but with some difficulty. He uses some British colloquialisms that at times can be difficult for Americans to grasp. For example, the use of “kerb” for curb is easy and “boot” for trunk of a car was obvious in its use, but it took me some time to figure out that “casquette” is a cycling cap, and I am still wondering over “chivvied by fear”.

The non-cycling aspects of Mr. Maunder’s story were mostly lacking in interest to me. His use of metaphors and other descriptors left me puzzled at times.

“Its cover has a picture of Cheever standing on a railway platform. Hands in pockets, wearing a heavy blazer and an oatmeal jumper, he gazes into the camera with an expression that seems to combine boredom, confrontation and bemusement.”

I have no idea how to picture someone looking bored, confrontational, and bemused all at the same time. There are too many other passages similar to that small piece that prevented the book from capturing my full attention, and which allowed me to put the book away for a few days.

I managed to read the book, but it took longer than I had originally anticipated when I received it from the publisher’s U.S. distributor. It is not a book that will hit any of my top-10 lists. Overall, however, I enjoyed the writing as it pertained to cycling.

Road to Valor is Perhaps the Greatest Cycling Story Ever

Book Review: Maglia Rosa – Triumph and Tragedy at the Giro...

Book Review: Roads Were Not Built For Cars: How cyclists were...