We all probably should increase our efforts to inspire school-age girls to ride bicycles. Author and cyclist Christina Uss has taken this concept to the extreme with her novel “The Adventures of a Girl Called Bicycle.” The narrative tells the fantastical, light-hearted tale of a 12-year-old girl who decides to ride all the way across the country, from Washington, DC to California.

Ms. Uss based the story on her own coast-to-coast bike trip that she did at an older age. The book's intended audience consists of 8-12-year-old girls, who should be able to read it easily. (But don't try this plot at home, kids!) 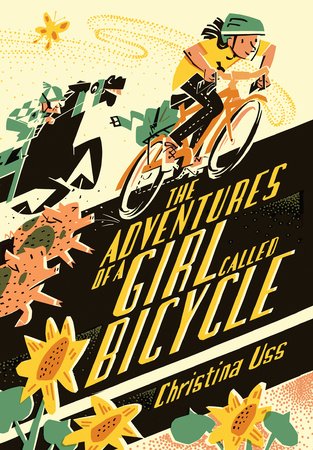 This mysterious girl is known only as Bicycle, lives in the Mostly Silent Monastery with Sister Wanda and a not very talkative monk named Sandwich, and apparently enjoys neither family nor friends. She seems not to have much desire to deal with real people, preferring to talk to her bicycle and other imaginary souls. “She slept with Clunk (the name for her bicycle) next to her bed, and occasionally she thunked down the wide staircase to breakfast on the bike.”

Asked about herself “The girl didn't say a word” or “the girl would either smile or stare, depending on how friendly the asker's voice sounded.” And the adults at the institution don't talk much either.

So with bicycling meaning all to Bicycle, she sets off on a journey across the country, intending to meet a famous bicyclist in California she decides is the one person she can make friends with.

“Zbig was Bicycle’s hero. She rearranged the letters in his first name to spell E-Z BIG WIN and found the words NICE and WISE in his last name. She started dreaming about winning the Tour de France and the Giro d’Ita- lia and other famous bike races like Zbig did, riding her bike for hundreds of miles with a grin on her face, waving wildly to her own cheering fans. She thought her dream wasn’t too far-fetched.”

While she's sensible enough to wear a helmet and bring along a set of tools, she's bold enough to think she can travel undetected across the country for several months without funds or anything not carried in her well-stocked backpack.

“When Sister Wanda told her that she needed to pack for camp, Bicycle had instead secretly packed supplies for a long-distance bike trip.”

Her resolve is great, “Bicycle figured she had to ride almost four thousand miles to get to California. She needed to be there on July 8. That meant she’d need to average about fifty miles a day. How hard could that be? she asked herself. Zbig and those other racers ride over a hundred miles every day for weeks on end. Fifty miles should be a piece of cake”

She enjoys the generosity of folks she meets along the way and manages to get most of the energy she needs to pedal 50 miles a day, day after day, from snack food.

While everyone she meets treats her well, the realities of a bicycle tour such as the need for a toilet, shower, cash or laundromat and the dangers of such a trip never get mentioned in the fantasy and no one seems to question her. Parents may want to talk to their kids about this.

Her adventures include biking into the Kentucky Derby. She figures out a way to get up the Rocky Mountains. How does she like Utah? She writes her long-lost overseer “I don't think the songwriter for ‘America the Beautiful' knew what to say about this part of Utah. It hasn't got amber waves of grain, purple mountains, or fruited plains. It's more like a playground molded from red Play-Doh. How lucky am I to be able to bike through an alien's playground?” as well as through 100 degree plus days. She finds Nevada both “lonely” and “lucky.”

The book emphasizes how we can be unique in our attitudes and goals; some people move and some stay put and we all are faced with alienation from each other. It sends a message to girls to both pursue their dreams and that a bicycle can become the vehicle for reaching them – even if nobody else rides along.

ÉTAPE: 20 Great Stories from the Modern Tour de France is...