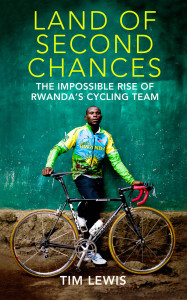 My wife Julie gave this book to me as a Christmas gift that she purchased at The King’s English Bookstore. I assume that she thought I would like the book as the cover has a picture of a tall thin black male with a Look bicycle and a Team Rwanda jersey. I am sure that she did not know Rwanda had a cycling team, nor did she know anything about the book, but thought I would like the book. Perhaps that is why we’ve been married for nearly 32 years, as she was quite correct. It is a really good book and was a very nice gift.

The book is a diverse collection of stories that primarily interweave the stories of 4 men, Tom Ritchey, Jonathan “Jock” Boyer, Adrien Niyonshuti, and Paul Kagame. They try to accomplish what seems like an impossible goal, putting a Rwandan man in the Tour de France.

Adrien is that man that it was hoped would ride in the Tour. As a young boy of 7 he survived the genocide that took the lives of 40 of his relatives including 5 brothers and 1 sister. Three of his siblings survived. After the genocide life returned to normal in Rwanda, though not truly normal. When Adrien was 14 he preferred riding his bike to soccer. His headaches disappeared when he rode a bicycle. So like his uncle, Adrien started racing, entering his first race at age 16.

Tom Ritchey, of Ritchey Bicycles fame, came to Rwanda through a friend and vice-president of a “mega-church”. At the time of Mr. Ritchey’s arrival in Rwanda he was 49 and was “in the midst of a spiraling midlife crisis, two years after his wife walked out on him without warning ending a 25 year marriage”. After his first trip to Rwanda, Mr. Ritchey became “happy”. He had a goal, provide a transportation bike for coffee growers to improve their lives. Given Mr. Ritchey’s competitive bike racing background it was only natural that he also conceived “Team Rwanda”.

Jonathan “Jock” Boyer is the next player in Tim Lewis’ book. Like Tom Ritchey, he is another lost soul finding redemption in Rwanda. Most reading this may not be aware that Jock Boyer has a Utah connection, having been born in Moab, Utah, before moving to California at age 5. He eventually became the first American to race in the Tour de France. Through Tom Ritchey, Jonathan Boyer came to Rwanda to create Team Rwanda.

Rwandan President Paul Kagame seems like another odd character in the book, but one has to remember the history of Rwanda. President Kagame wants to see progress in his country, yet continue to hold power, sometimes with conflicting goals. He indirectly was involved in Mr. Ritchey coming to Rwanda and has the means to help Team Rwanda succeed.

One may wonder why go to Africa to seek cycling talent? As the book points out, history gives the answer. It was in 1960 and again in 1964 when Abebe Bikila from Ethiopia won the Olympic marathon. You may remember seeing his picture on the wall of the Dustin Hoffman’s apartment in the movie, Marathon Man. Then in 1968, Kipchoge Keino beat the then undefeated American Jim Ryan in the 1500 meter race. From then on African runners have been dominant in races of 800 meters and longer. So why not cycling?

Tim Lewis as I mentioned did a great job researching the book. Land of Second Chances starts with the history of Rwanda and its colonial past. It then moves onto the events leading up to the genocide that killed 800,000 people, 10% of the population in 100 days. After the genocide the country was declared “the poorest country on the globe” by the World Bank. In addition, if you saw the movie Hotel Rwanda, you will read a completely different version in the book.

In between you will have a hard time putting the book down following the ups and downs of a group of Rwandan cyclists and Jock Boyer whom the riders simply call coach. Perhaps there will be a third chance for Team Rwanda. I’d encourage you to buy this book at your local bookstore.

5 Things to Consider When Buying Your First Real Mountain Bike