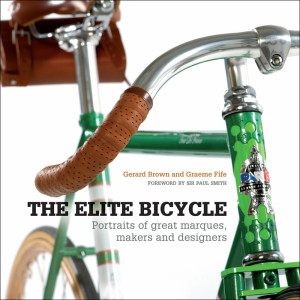 Imagine the following scenario. A couple of friends stop by to go for a ride. While you are finishing putting on your riding kit, your friends note a copy of The Elite Bicycle on your living room coffee table. As you walk down the steps one of your friends remark; “Hey this book is cool”. You then point out some of the interesting parts of the book. As the conversations continue, an hour or so passes and the 3 of you decide that maybe you should get out for the ride that was planned. That’s what will happen when you pick up this book.

The Elite Bicycle is a large “coffee table” book about a selection of products that include frames, frame tubing, saddles, chainrings, spokes, rims, hubs, tires, and headsets from some very well known manufacturers and not so well known manufacturers. Mr. Brown and Fife are British so you will be entertained by learning about Brooks saddles, hubs by Royce and frames from Chas Roberts, Rourke and Condor/Paris representing English manufacturing. On this side of the pond, the USA is represented by such well-known names as Chris King, Seven Cycles, Richard Sachs, Ben Serotta, and Independent Fabrication. Former Wild Rose employee Tony Pereira is in the book along with his “Breadwinner Bikes” partner, Ira Ryan. Winter Cycles is a name that I haven’t heard about, but builder Eric Estlund is in the book as is Mark DiNucci, a name that I had heard of but knew little of him. These 4 builders are all from Oregon.

Twenty-Nine manufacturers are each given 4-10 pages of company history, trivia, and philosophy, as well as a bit about the personalities behind the companies. The historical giant and old school British firm Brooks Saddles received the longest review at 10 pages. It was fascinating to read about the intense emotions, engineering and laborious and detailed work to perfect the products. The forward of the book was written by Sir Paul Smith who said that The Elite Bicycle: “celebrates the passion”; “they are real craftsmen”. (Please excuse Sir Paul but the British Knight was mortal enough to overlook the craftswomen from Seven Cycles, Chris King, Mavic, Continental, Sapim and Time pictured in the book.)

I was entertained by all of the manufacturers presented in the book. If you want to obtain some French FMB tubular tires you will need to line up behind the elite pros Tom Boonen, Fabian Cancellara and Taylor Phinney. “Some 80 separate processes go into the manufacture of a single tubular” according to the book. Former rabbinical student, Richard Sachs is more than adequately described as the meticulous perfectionist that he is. “He is a very thoughtful, articulate man with sharp and considered insight into the craft he practices. His blogs delve deep into its mystery and he celebrates its mystery with an inner delight, a celebration of actual rather than perceived quality”. I’m not sure if I can fully interpret that. Just remember that once you place an order with him it will be a 7-year wait.

I was surprised to see Faggin featured in the The Elite Bicycle. I have not seen a Faggin since the 80’s. Faggin makes a variety of bikes, but the bike featured in Faggin’s story was a “gentleman’s tourer” that looked like it was from the early 70’s. It had downtube shifters, non-braze-on accessory clamps for cable -housing routing, and a small leather seat and handlebar bag to complement the unsurprising leather saddle. It looked beautiful!

Spoked bicycles wheels arrived in the 1870’s. Spoke manufacturing is represented by the Belgium firm, Sapim in “The Elite Bicycle”. Here you will read that rolls of stainless wire are “teased into submission along a series of rollers, cutters and straighteners. Quality control is an obsession”. I sort of felt sorry for the guy that was pictured cutting threads, “by hand, one by one”. Given that the two Sapim plants (one is in France) produce “some 600,000 spokes”, how long can one do that before going bonkers!

Books like The Elite Bicycle are meant to be like a good meal, savored over time. It brings you behind the scenes so to speak, to peek into the world of the craftsmen and women that bring you the quality product you own or dream of owning. Perhaps a second edition will come out in the future featuring another group of bicycle products.

The Elite Bicycle: Portraits of great marques, makers and designers

By Gerard Brown and Graeme Fife