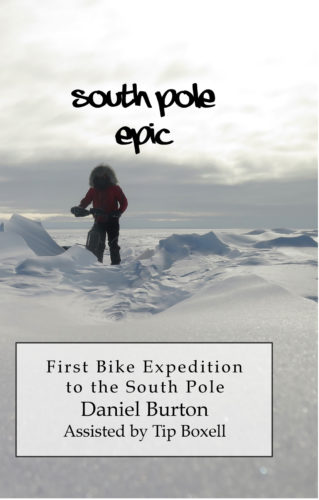 Anyone who knows me knows that I have done some epic things. But Mr. Burton has taken it to another level far beyond. Who decides to bike to the South Pole? With absolutely no experience camping in winter. At least he had the sense to do it in the southern summer. Still, I am absolutely amazed that through stubbornness and audacious tenacity he actually made it there. Kudos.

“Cold, uphill, 20-30 mph headwind in the snow. It was the definitely hardest day of my life, again.” I can’t help but laugh at the monstrosity of the man’s dream. He went from sea level to 9300 feet. Basically in the middle of winter, although it was “summer; down there. Carrying and pulling sleds with all his food and gear. Or mostly pushing it on foot at times.

A few anecdotes: “I think I have a sleeping disorder. Whenever I sit still for a few minutes I will fall asleep.” Sound familiar after a really long, hard ride?

And then his freehub went out, again. “I wired the cassette to the spokes…” In the middle of Antarctica. But he managed to fix it enough to keep going as long as he was careful with it. And he was in a personal race with Juan Granados, who claimed to be riding but Burton was following his ski tracks, not bike tracks.

The best part is that Daniel is one of us. He was a computer programmer for 23 years here in Utah, and after getting laid off he founded Epic Biking in Saratoga Springs on the west side of Utah Lake. Biking had gotten into his blood, like it does with a lot of us. And then he took a few thousands steps farther. Well done.

It is quite a read. Using a combination of notes from a journal and writing from remembrance, this tough trip comes through loud and clear. Well worth the time, and will bring back memories of long, hard rides of your own.

Tom Danielson’s Core Advantage is for Any Cyclist That Wants Their...