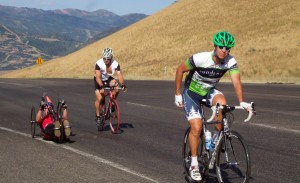 National Ability Center supporters get on their bikes for Summit Challenge

PARK CITY, Utah (Aug. 16, 2012) — Less than two weeks after some of the world’s best pro cyclists raced through the Wasatch Mountains for the right to be crowned Tour of Utah champion, riders of all ages and abilities will hit many of the same roads in the name of fun and fundraising.

On Aug. 25, more than 500 people are expected to take part in the Summit Challenge, an annual ride aimed at increasing awareness for the programs and activities offered at the National Ability Center, a nonprofit organization headquartered at Quinn’s Junction in Park City.

As in the first three years, the event will feature an array of route lengths — ranging from 18 to 102 miles — that follow paths in and around Utah’s premier mountain town.

But for the first time, the field will include 30 members of the Wounded Warrior Project, another nonprofit organization, whose mission is to honor and empower injured service men and women.

For the participating Warriors, the Summit Challenge is also a Soldier Ride, one of a dozen cycling opportunities on the WWP’s national schedule for 2012. 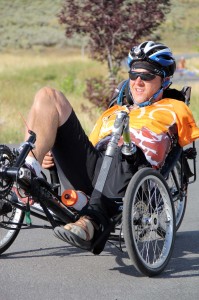 The Summit Challenge is one of only a handful of fundraising rides that take place in Utah. The cost to participate ranges from $15 to $80, depending on age and route. Those with a disability ride for free.

For the event, the National Ability Center’s main parking lot will be turned into a race village, where riders and guests can find a variety of vendor booths and food provided by El Chubasco and Davanzas.

As well, local musicians The Codi Jordan Band will perform from 1 – 2:30 p.m.

Other festivities include an awards ceremony and raffle.

Where: The race will start and end at the National Ability Center

Event Description: Riders of all ages and abilities will hit the pavement for a 102-, 52-, or 18-mile road ride event in support of the National Ability Center’s mission. All three fully-supported routes follow paved roads in and around the beautiful Park City mountainside. Those riders who take on the century route will be rewarded with stunning views of the Jordanelle Reservoir, Deer Valley and Mt. Timpanogos, as well as the splendid backdrop of the Uintah and Wasatch-Cache National Forests. This exciting event promises to serve up a challenge for a wide range of cycling levels and abilities.

The National Ability Center empowers individuals of all abilities by building self esteem, confidence and lifetime skills through sport, recreation and educational programs. The Center is located in Park City, Utah, and is one of the largest in the country to provide recreational and sports opportunities to individuals with disabilities. It is also one of the first to be named both a chapter of Disabled Sports USA and a Paralympic Sport Club. Each year, the NAC provides thousands of lessons in programs including skiing, horseback riding, cycling and archery.

Soldier Ride is a cycling event to help Wounded Warriors restore their physical and emotional wellbeing with warriors of all ability levels participating. There are state-of-the-art adaptive hand cycles, trikes and bicycles to accommodate warriors with various injuries and disabilities, as well as unmodified road bikes for riders not requiring adaptive equipment. Wounded Warrior Project (WWP) provides equipment and support at no cost to warriors.

Soldier Ride raises awareness for our nation’s wounded warriors who battle the physical and psychological damages of war and gives the public a chance to honor these men and women. The event takes place in 12 cities across the United States in 2012. Soldier Ride, presented by GEICO, is also being supported across the country by U-HAUL (uhaul.com), a founding partner of Wounded Warrior Project.

The mission of Wounded Warrior Project (WWP) is to honor and empower wounded warriors. WWP’s purpose is to raise awareness and to enlist the public’s aid for the needs of injured service members, to help injured servicemen and women aid and assist each other, and to provide unique, direct programs and services to meet their needs. WWP is a national, nonpartisan organization headquartered in Jacksonville, Fla. To get involved and learn more, visit  www.woundedwarriorproject.org.