Let me state from the outset that I do not work for the St. George Chamber of Commerce. Moreover, I have not received any remuneration or financial benefit from the organizers and promoters of the Tour de St. George. I make these disclaimers because what I am going to say hereafter is so complimentary that some might question my motives and interests.

I first rode the autumn edition of the TdSG in 2006. I was fairly new to road cycling and to century rides in particular. While it was probably my second or third 100 mile event, it was my first real experience with a significant amount of climbing (about 6,000 ft.). Yet, in spite of the challenging course, it was love at first ride. With the exception of 2007 when I was recovering from a two week cycling excursion to France with my friend Dave Ward, I have ridden the TdSG every October since.

So what makes this such a great ride? First and foremost is the almost sure bet that there will be great weather. Unlike the spring edition of the TdSG, which has been held as early as February and most recently in April, the fall version has an impeccable track record for featuring warm (but not too hot), sunny days. The past four years temperatures at the start have been in the high 50’s and somewhere in the 80’s by early to mid-afternoon when most riders are cruising across the finish line. If you’re like me, in mid-October you’re not quite ready to give up the freedom of warm weather bicycling to don all that thermal gear colder conditions require. The Tour de St. George has become my way of prolonging summer. 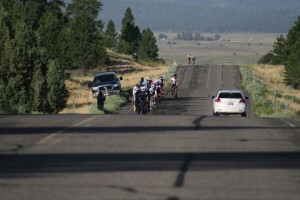 To as close to a guarantee as Mother Nature is willing to give on the weather, add a venue that is second to none. The Tour takes riders through some of the most spectacular scenery Southwestern Utah has to offer. The usual century route takes participants out of St. George into Washington and from thence through LaVerkin and Toquerville and then back to St. George by way of Leeds and Coral Canyon. Then comes the major climb of the day up to the entrance of Snow Canyon State Park via SR 18. From there, riders enjoy a fast, serpentine descent through the Canyon and finish by traversing the back roads of Ivins, Santa Clara and finally, St. George.

This year road construction mandated a course modification. The Snow Canyon descent and the LaVerkin/Toquerville loop was replaced by a longer climb up SR 18 to the town of Veyo and a trek over to Gunlock State Park and from there up Old Highway 91 to a turn-around point near the summit of “Utah Hill.” After descending back down Utah Hill, riders bent southeastward into Santa Clara and then southward through Bloomington to SR 7. At that point the course turned eastward and skirted the Arizona border until it angled northeastward into Washington Fields. There, the route turned northward and brought riders into Washington City. A loop out to Coral Canyon and back was capped off by the final return to downtown St. George. While I missed the exciting descent through Snow Canyon, I felt that I was at least partially compensated by the beautiful ride from Veyo to Utah Hill. And, since this year’s route had the same amount of climbing as the usual course, I felt that I had not been “cheated” out the typical effort required to complete the event.

Which brings me to my final comment on what makes the Fall Tour de St. George such a great cycling event. Hats off to the organizers! The Tour just seems to get better every year. The route is well thought out. When modification was required due to road construction, the planners were careful to map out an alternate route that preserved the essential characteristics of the event. The support is excellent. Food and water stations are well stocked and adequately manned. This year there were no long lines of riders waiting to fill bottles or get into porta-potties. A big plus for me this year was that the water at all the aid stations was ice cold and plentiful. Nothing depresses me more on a long ride than having to drink warm water, or worse yet, having no water at all. Having experienced both on numerous century rides, when I do participate in an event where there is no shortage of cold water, I always make it a point to commend the organizers for their knowledge of the sport and their good planning and execution.