It’s the heart of winter the trails are under snow, the roads are covered with salty slush and snowplow detritus, the inversion is never-ending, and you are jonesing to get out for a big bike ride. But Moab’s also too cold, you’ve been to St George a lot, don’t feel like dealing with Las Vegas, and taking your bike on a plane to Santa Barbara is too expensive and problematic, so……where to go? To find warmer temps and great riding, what better place to go than the hottest place on earth? Death Valley is the place, and its only 6 hours away from the Wasatch Front.

Death Valley is – of course – most famous for its lowest-point in the US status and its summertime heat (it got to 129 degrees in June 2013), but it’s also surprisingly large (the national park is the same size as Connecticut), has several big mountain ranges (a couple with 12,000 feet of relief to the valley floor!), and is quite wild with over 90% of it being wilderness. However, it is crisscrossed with a wide array of beautiful paved and gravel roads, and since the region gets a grand total of two inches of rain per year so the odds of getting rained on are fairly low. Add in very mild wintertime temperatures sublimely austere and beautiful desert scenery with a rich history and you have a pretty fascinating area.

The town of Shoshone – with a café, motel, hot springs, and 10 residents – is the most proximal Death Valley gateway for Salt Lakers, and is only an hour from Vegas. From there it’s a 55-75 mile (depending on your route) ride to Furnace Creek, which is the hub of Death Valley. Two of the routes are paved, and another is gravel and ‘cross-bike worthy, and all three go over 3-4000 foot passes and have little to no traffic. On your way you can make the side trip up to the 5500-foot Dante’s view, with spectacular views up and down the valley. If you make the grind up there, you get a remarkable 16 mile descent to the below-sea level oasis of Furnace Creek, where the ruggedness of the surrounding terrain is somewhat strangely offset by the typical national park amenities such as restaurants, a visitor center, grocery store, campgrounds, and lodging. Yes, everything is a bit overpriced, partly due to the National Park concessionaire markup, but also because at that point it feels like you are pretty far out there, and if it wasn’t for the spring/creek of Furnace Creek that provides the water for that area, there would truly be nothing for hundreds of miles. 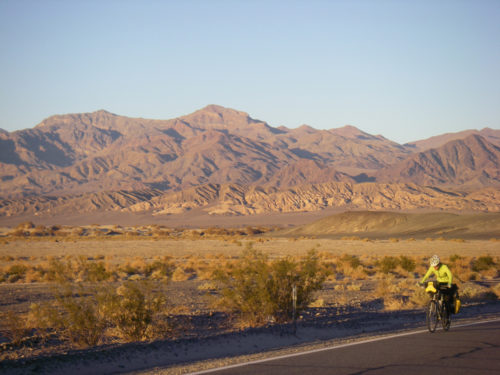 Near Furnace Creek are a good handful of side trips: The Harmony Borax mine is what started civilizing Death Valley in 1881 and the mildly-interesting ruins of it are just outside of ‘town”, nearby Golden Canyon has a couple of canyon hikes and is famous for its sunset photos, and Artist’s Drive is a paved one way side-loop with a 1-2000’ climb, and both sport spectacular and colorful rock formations that even jaded Utah desert rats will find impressive. And of course there’s Badwater, the innocuous spot a few miles away that is formally the lowest spot in North America at 282 feet below sea, but is somewhat anticlimatic since it’s only a few feet lower than anywhere else and is typically full of tourists wandering around on a playa trying to figure out they should do with themselves besides take cheesy selfies.

North of Furnace Creek there are a couple of options; it’s about 25 flat, paved miles to the other notable outpost of Stovepipe Wells. Nearby are the sand dunes made famous in a bunch of the Star Wars desert scenes that are worthy of an hour’s worth of romping around, and to the west/south the road goes over the Panamint mountains to Panamint Valley, or you can stay in Death Valley proper going northward. Another fun loop option is to veer northeast over 4000+ foot Daylight Pass through the Amargosa range towards the Nevada border and then cut back up again on a gravel – but very ‘cross-able -road through the mountains over the aptly named Red (rock) Pass, then plunges and twists ever-downward on what is best described as a slot canyon with a one-way road through it! Going back and forth over 4000 foot passes doesn’t seem like much to people who live at 4000 feet, but when you start below sea level, they feel like real climbs! After a final plunge back down to the valley floor, it’s not far to loop back on the pavement to Stovepipe Wells, or you can climb gradually northward towards Scotty’s Castle.

Though bordering on the cheesy side of touristy, Scotty’s Castle is worthy of a visit and the $15 tour. It was built by a wealthy Chicagoan around the turn of the century who was captivated by tales of vast untapped natural resources and adventure to be had in Death Valley by a bigger-than-life local named Scotty. While the lucrative extraction didn’t transpire, the adventure associated with early life in Death Valley resonated with the financier, and he had a remarkable castle built that ultimately bore the name of his charlatan – but charming – buddy instead of his own (and indeed, “Albert’s Castle” probably sounded a bit stuffy for the wildness of Death Valley). The National Park Rangers dress up in “period” clothing to be the tour guides and clearly love the place and the story, so if you have the right attitude, it’s a fun way to spend an hour or two, knowing that there’s a fun descent awaiting to dive back down into the valley.

Not far from Scotty’s castle is Ubehebe Crater, another nice side attraction. It’s the remnant of an old volcano with a couple of impressively deep craters, and geologically-speaking they were formed practically yesterday, without any other effect in Death Valley. These are on the beginning of the 28 mile long gravel road to the Devil’s Racetrack, where rocks have mysteriously moved (literally) in the dry playa, leaving long tracks in their wake (a mystery that was just solved this past year; google it). There’s more to see past the Devil’s Racetrack, but given the distance, ruggedness of road, and lack of water out there it may not be as bike-friendly, though that means there’s plenty of opportunities for adventure.

The mountains of Death Valley start off the valley floor in long, low angle scree fields that finally end in huge escarpments that have canyons carving through them, and not surprisingly this is where many of the hikes are. But “low angle” is a relative term, and the ride/hike combo typically starts with a pretty healthy grind straight up a thousand feet in a couple/few miles to get to the hikes, but they are worthy. Mosaic Canyon, Grotto Canyon, and Natural Bridge Canyons are some classics.

Death Valley is well-suited both for bike touring and day rides, with the limiting factor being water. Stovepipe Wells, Furnace Creek, and Panamint Springs all have (simple, and a little bleak) campgrounds and lodging, (so a credit card tour is very viable) and Mesquite Spring Campground near Scotty’s Castle has water as well.

For Utahns who grow weary of winter’s snows and cold inversions and think they’ve seen a lot of desert scenery Death Valley is a fascinating and different kind of desert. The combination of austere wildness with paved and gravel roads with little traffic, big climbs, long flats, mild temps, and interesting history makes for at least a week’s-worth of excellent riding and adventuring.

About Cycling West: Cycling West is a print publication and website that works to grow, connect, and inform the cycling community in Utah, Idaho, Wyoming, Montana, Nevada, N. Arizona, N. California, and Western Colorado. We have a complete calendar of events in the region, and strive to reach cyclists of all types. We distribute approximately 13000-15000 copies each month throughout the region. We also post the issue for digital download. Our mission is to make the world a better place through bicycling. Please join us! Contact us: [email protected]clingutah.com

A Short Bicycle Tour of Southwestern Utah and Southeastern Nevada

Antelope Island: A Californian’s Utah Bicycle Adventure in the Time of...