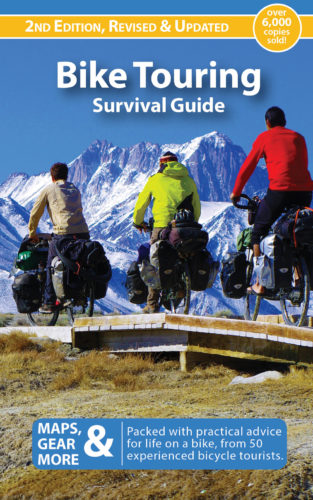 Andrew and Friedel are known as the Travelling Two, though they are now the Travelling Three with the addition of Luke in 2012. The website is not only their personal website but it seems to be a clearinghouse for other long distance bike travelers. Hence the Bike Touring Survival Guide (e-book) is advertised on the website as “250 pages of tips from over 50 experienced bike tourists”. The actual book has 455 pages.

I purchased the 1st edition of the Bike Touring Survival Guide a couple of years ago with the promise that when the second edition was printed I would receive a copy. True to their word, I recently received the 2nd edition with the updates. The book only comes as an e-Book with PDF, Kindle and ePub files for 7.50 Euros (the print version will be available in early 2015). This is an incredible bargain for an encyclopedia of bike touring knowledge.

Andrew and Friedel use the proceeds of the book to help finance their travels. So they ask that you do not pass it around on the Internet. Without this meager source of income they may not have been able to bike tour the 60,000 Km in 40 countries. As a result of their experiences they are able to provide the invaluable advice they give for experienced and novice bike tourers through their book.

Originally from Canada, Andrew and Friedel were living in London before their first bike trip. They were looking for an “adventurous way to go around the world”. During a “random internet search” they happened upon “the website of Alastair Humphreys who, at the time was in the midst of his own global bicycle tour.” Inspired, they left after 9 months of preparation in 2006, embarking on a 3-year around-the-world journey on their bikes. After that bike trip, they now live in the Netherlands.

The book is primarily, as they say, “your personal cheerleader, here to get you started on a lifetime of two-wheeled discoveries”. The book continues to be a cheerleader under the heading of “Why You Should Read This Book”. There are multiple pages in this chapter that would encourage even the most skeptical cyclist to go on a bike tour.

Much of their advice in the book is a compilation of choices and considerations, a rather extensive list. For example, their advice on what bike to buy is: “Bike touring can be done on any bike as long as that bike meets two criteria: it should be in reasonable mechanical shape and you should feel comfortable riding it. Everything else comes down to personal preferences and style.” Overall they devote over 13 pages to bicycle considerations including examples of bikes ridden by many other long-distance traveler. At $1000-2000 they say you can buy a good touring bike such as the Trek 520 or Surly’s Long Haul Trucker. For $2000-4000 they say you can get an expedition-quality touring bike. Their absolute limit is $5000, when they say; “There is a point where spending more money doesn’t get you a whole lot. We personally don’t see much value in blowing more than $5,000 (U.S.) on a touring bike. The mechanical advantages are negligible and when you plunk down that amount of cash for a bike. It risks becoming such a valuable possession that it takes away from the freedom of touring. Will you be able to lock it up in a city square for an hour so you can go sightseeing or will you be too paranoid to take your eyes off it?”

Sometimes the advice in the book is very specific based on their experience. For hubs they state in the book to buy LX Shimano hubs vs. XT; “because the newer XT models aren’t as durable as they used to be.” Further they say; “If you have more cash to spend, you might look at hubs by manufacturers such as Phil Wood and Hope.” They devote several paragraphs to Rohloff hubs though they have not used them in part due to cost. They do have bikes that could convert to a Rohloff hub if desired.

If foreign travel is what you are interested in, the book devotes 25 pages specifically to foreign travel, though there are many references to traveling in foreign countries throughout the book. If you are concerned about fixing your bike in remote parts of the world, Andrew and Friedel have numerous tips about fixing your bike such as how to make an emergency spoke. There are numerous anecdotes as well throughout the book such as a short piece by Alastair Humphreys repairing (actually rebuilding) a wheel while in his tent during a storm.

If you have a question, there is probably an answer in the book. There are short sections about “Caring for raingear” and “Keeping shoes in good shape”, though I doubt if I would boil a rock to “create a mini heater” and use it to dry my boots. Other unique recommendations include using (denatured) alcohol to prime your (liquid fuel) stove, something that I have been using for many years and the first time I have seen this recommendation from someone else. They also suggest tents that I use from Big Agnes and MSR, though they neglect the REI brand tents that I use, presumably because they now reside in the Netherlands.

Although the overall information in the book tends toward the long-distance cyclist, a novice will come away with ample advice. Andrew and Friedel make a good effort to make suggestions for the novice tourist along with stronger recommendations for experienced bike travelers. I highly recommend this book for anyone that is planning a bike tour.