South Korea historically has not really been on the radar as a bicycling destination the way the trans-America, western Europe or Vietnam are, but since it has the fundamentals of plenty of rural areas with rolling, uncrowded roads, a long, rich, and interesting culture, and excellent food, I figured it had to be a bit of an unsung gem. Learning that I had a work trip to Korea in early summer I started looking into the possibilities of riding there, and found that not only was bicycling very popular in Korea, but that the government had actually built a 500 km long bicycle touring route linking their 4 biggest rivers that spanned the length of the country! I was in.

The Four Rivers Trail – as it’s called – goes between the two biggest cities: Seoul in the north and the industrial port city of Busan in the south, and goes generally right through the center of the country. Even though Korea is comprised of something like 80 percent mountains, that route is almost completely flat, since the eponymous rivers it traverses are big, broad, and flat themselves after being filled from creeks tumbling down from the mountains. The government probably felt that making a route that was quite flat was a way to entice people to use it, since riding hills was “difficult” and my own experience of typical Asian fitness (there’s a lot of use of zero resistance exercise “machines” on flat, paved “fitness trails”) indicated that resisting gravity was not part of the Korean mindset. However, westerners looking for “real” touring opportunities that traverse up and over some of the beautiful mountains have a bit of a patron saint in a Dutch guy name Jan Boonstra who used the Four Rivers Trail as a bit of a handrail and did some excellent variations on his own map that not only maintains the quiet-roads integrity of the designated route but also indicates where the motels are and also has up-close details of potentially-confusing areas. Armed with Jan’s easily-printed maps I launched out of Busan, headed for Seoul, despite the fact that my Korean work colleagues were convinced that at best I’d melt in the forecasted rain or completely disappear forever and they’d have to answer for it!

That said, moving farther from the big cities the cyclist population dropped to more of a typical Asian utilitarian nature, but the quality of the riding remains. Jan’s route veers onto and off of the Four Rivers route, climbing into the moutains here and down to the rivers there, and even though it’s not always a bike path, they are quiet, twisting, rolling roads with villages and towns punctuating the route so there are always opportunities to re-provision. Camping is not very common in Korea, if for no other reason than pretty much every inch (centimeter) of flat land is used to grow food (mostly garlic and cabbage for kim chee!), but the motels are very nice and relatively inexpensive at around $30/night. Korea’s economy is quite well-developed; almost everything costs about the same as in the US (I was just as horrified to see $7000 road bikes there as I am here!) but motels seem to be a bit of a cheaper exception, which is nice. And fortunately, the Korean word for “motel” is…..”motel!” However, for some reason my pronunciation wasn’t quite right, because I’d roll into town and find a local and say “motel?” and they’d just give me a quizzical look so I’d repeat it again with a slightly different pronunciation, but they still wouldn’t get it. However, I learned to keep trying until their face lit up and said “Oh….Motel!” Yes, indeed….motel. And the nice showers in the nice motels were much-appreciated; Korea is about the same latitude as Utah so it has distinct seasons, and the summer is hot and humid, so much so that even with the breeze of riding I was bathed in sweat all day every day.

At one point after traveling for a few days following Jan’s route I decided to veer off it and head for one of Korea’s many national parks, which dot the entire country. I’d always heard that Koreans are mad hikers and love their mountains like Europeans, so armed with only a very broad tourist map of Korea I headed in the general direction of one of the parks, guessing at the maze of smaller roads that would get me there. Since generally I was trending north I just kept the sun at my back, which worked just fine…..until it rained. I learned it’s hard to navigate by the sun when it doesn’t really exist, and laughed pretty hard at myself when one half-day’s worth of riding got me back to exactly where I had started!

But eventually I made it to one of the big national parks, rode the invariably-steep climb up to the park entrance, parked my bike, and headed into the hills. Sure enough, Koreans love to hike; I literally saw thousands of people on the trails, and the trails are not for the faint of heart; they don’t ever use switchbacks and most of the trails are super steep, like 20-30%. And despite the oppressive heat, humidity, and steep climbs, the Koreans are decked out head to toe in the latest gaudy outdoor apparel and carry surprisingly large packs. I tried to guess at what they were carrying in their packs (the Korean ten essentials?) and finally got my answer at the top of the highest peak in the park: Food! They like to bust out huge quantities of all their favorite foods that are neatly packed in tupperware containers, and literally have large feasts on top of the peaks, surrounded by others who are equally feasting.

Speaking of food, Korean food is great; it’s quite different from that of nearby Japan (a lot of bad blood there still from WW II) and equally-close China, mostly by its focus on kim chee. Kim chee is pickled cabbage soaked in

garlic and chili peppers, and it’s part of every meal, yet there are innumerable variations on that theme depending on the restaurant, region, household, etc.

Even though “pickled cabbage” doesn’t sound that appealing to the western palate, it’s quite good, and is a great supplement to the Korean barbeque, which even the most basic restaurants serve: beef that is as succulent as Japan’s famously-expensive Wagyu beef. That said, there is a chain of stores called “Paris Baguette” that was even more ubiquitous than our Starbucks and provided pretty good, quick daily riding fuel.

As always, riding a bike through a foreign land enables the ability to sniff out interesting, off-the-beaten path sites. One that I stumbled across was a museum of Buddhism; a guy who has apparently become a renowned wood sculptor of Buddhist scenes and images used his fame and influence to also acquire Buddhist artifacts from recent to ancient from across Asia and place them in a beautiful, serene compound of simple, yet elegant buildings in an otherwise-nondescript town about 100km from Seoul. I got there just an hour before they closed for the day, and after a bit of poking around I was surprised to be approached by a woman who spoke the only English I’d heard in a week; it turns out that her father-in-law was the artist and she was nice enough to give me a personal tour of the entire place even as they were closing down. Regardless of your religious persuasion – or not – the peacefulness, serenity, and sly grin of Buddhist imagery does a lot to soothe the soul. 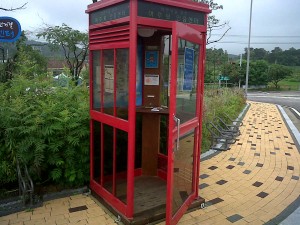 I’m not sure if the Korean government’s proud investment in their Four Rivers trail (they actually have a passport for you to stamp at various “stamp stations” that are old converted phone booths!) will manifest itself in becoming a global bike touring destination, but it’s very much worth a look. The people are friendly, the terrain is beautiful, the riding is great, the culture is ancient and interesting, and the kim chee is spicy!

For more information on biking in Korea, see http://user.chollian.net/~boonstra/korea/cycle.htm

Can An E-bike Really Be Used For Touring?

Peter and the Brink