The Utah Lake to Squaw Peak Challenge is a 31.3-mile, out-and-back ride that starts and finishes at Utah Lake State Park in Provo. The ride makes liberal use of the Provo River Parkway for the opening 10.7 miles, and then veers onto U.S. Highway 189, and then Squaw Peak Road for the climb to the Squaw Peak Overlook. The ride’s elevation ranges from 4,500 feet at the start to 6,695 feet at the turnaround, for just under 2,200 feet of climbing. The gradient is a barely perceptible average of 1% for the first 11.3 miles, followed by a very perceptible 8 to 11% for the final 4.3 miles, to the turnaround.

Video of the Climb by Dane Christensen, danesdrone.com

Start the ride at Utah Lake State Park, located in far western Provo, at 4400 West Center Street. Entrance fees as of this writing were $9 for a motor vehicle ($5 for age 62 and over), and $2 for a bicycle. Utah Lake is a freshwater lake, unlike the Great Salt Lake; and, despite its size, Utah Lake’s maximum depth is only about nine feet. Leave the park by heading east on West Center Street; the ride officially begins at the left turn onto 4200 West. Look for the entrance to the Provo River Parkway (paved path) on your right. Turn right here, and ride parallel to the Provo River, meandering along its north side. This is a lower branch of the river, draining into Utah Lake from the Uinta Mountains. The upper and middle branches of the river are impounded at the Jordanelle and Deer Creek Reservoirs, both located well east of here. The opening 5.6 miles of the ride, and the path, are grade-separated. The path generally heads northeasterly, with a few twists and turns along the way. At mile 2.7, the path loops and then crosses over the river aside Geneva Road, before resuming along the river’s south bank. From here, it is a pleasant, tree-lined ride through park settings, adjacent Provo neighborhoods. The city of Provo, with a growing population of just over 116,000 as of 2013, is Utah’s third-largest city. The city’s largest employer is Brigham Young University, which is perhaps its greatest claim to fame. The city’s notables include a strong musical presence in the Osmonds’ family group, rock groups Imagine Dragons and Neon Trees, and actress-songstress Julianne Hough, and an equally strong athletic presence in NFL quarterback Steve Young and NCAA cross-country champion Josh Rohatinsky, among other famous personalities in these and other fields.

Cross back over the river at mile 5.1, and continue along the Provo River’s west bank. The pleasure of grade separation ends at 2230 North, where the path darts across the river one more time, and empties out onto the walkway on the north side of the road. Continue eastward along the walkway, and then turn left (remaining in the walkway) to head north on University Avenue. The path resumes along here, although it is little more than a paved path that parallels University, on the road’s west side. Be especially cautious at the at-grade crossings along here, particularly at the busier ones at 3700 North and 4800 North. The Shops at Riverwoods appear on your left north of 4800 North; this upscale, mostly outdoor mall was the setting for the end of a Tour of Utah stage in 2011. The at-grade crossings finally end at mile 9.0, at 5600 North, just past the mall and adjacent businesses. From here, the Provo River Parkway swoops under 800 North, as you enter the northeastern corner of the city of Orem. As you emerge from the underpass, a popular parking area for Provo Canyon access is on your left. Keep riding into the canyon; cross over Provo River – oh, there it is! – at mile 9.6. With its steep bluffs, the river, Bridal Veil Falls, the Heber Creeper (historic railroad), the nearby Sundance Resort, and other attractions, Provo Canyon is very scenic and popular. The path on which you are riding is also popular, although you are destined to leave the path at mile 10.6. Turn right here, onto the access road, followed by a cautious left turn onto U.S. 189. The highway features a bike lane. After just 0.6 miles along the highway, bear right onto Squaw Peak Road. The elevation here is 4,953 feet; you have climbed just over 450 feet since the start, at an average grade of just under 1%.

The topography changes dramatically as you begin the climb up Squaw Peak Road. The gradient averages 8%, as you head toward Squaw Peak Overlook. Stay to the right at mile 11.75; the road to the left leads to an archery range. One mile later, at an elevation of 5,526 feet, the Bonneville Shoreline Trail crosses the road. Continue climbing through the numerous bends and switchbacks, enjoying the spectacular view of the mountains, the urbanized Utah Valley front below, and Utah Lake. Enter the Wasatch-Uinta National Forest about halfway up the climb. Along the way, you will see a variety of trees, including maple and oak, and, depending on the season, some wildflowers in bloom. At mile 15.3, bear right onto the road that takes you to Squaw Peak Overlook (the paved road to your left eventually transitions to dirt). Continue climbing along this final, steep section (11% grade) to the road’s end. Turn around here, after taking in the view. Return the way that you came by following the reverse route. 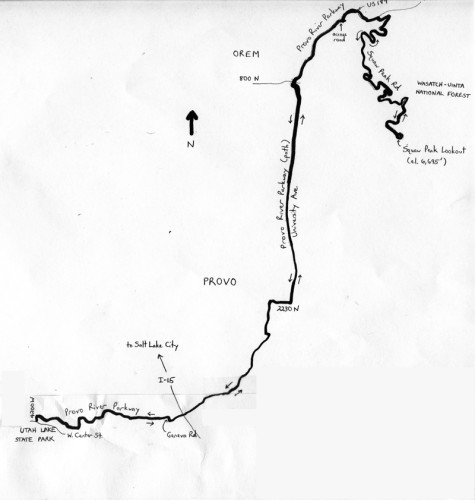