Riding around Utah Lake is popular, in that it is much smaller than the Great Salt Lake, and is encircled with roads, none of which are mountainous. It is nonetheless a long ride to make it around the entire lake. This shorter ride covers just the southeastern area near and along the lake, west of Springville, Spanish Fork and Payson.

The ride visits the communities of Benjamin, Palmyra, Lake Shore, Genola, and West Mountain. The largest of these is Genola, which had a population of 1,397 in 2013. The region’s total population of about 5,100, and a setting away from the through traffic of the I-15 freeway, assures that the roads of the route are lightly-traveled. The landscape is predominantly farmland, growing varieties of fruit.

The Utah Lake: South Shore Cruise is a 38.75-mile counterclockwise loop. Counterclockwise is the preferred direction, to keep Utah Lake’s water on your right. The net elevation difference is small, at just 318 feet, although there are plenty of undulations along the way, making the ride not entirely flat. Start at Benjamin Park, located at 7300 South 3200 West in Benjamin.

Benjamin is an unincorporated community, located west-southwest of Spanish Fork. Benjamin is 58 miles south of Salt Lake City; there is a “Benjamin” exit from I-15. Benjamin was not named for the Biblical character; rather, it was named for Benjamin Franklin Stewart, one of the community’s founders.

Start by heading east on 7300 South, which is State Route (SR) 147 until 3200 West, and then SR 115 beyond 3200 West. This part of the route is nearly pancake flat, as you are essentially riding in a basin formed by several waterways that drain from nearby Mount Nebo into Utah Lake. These include Spanish Fork River, Beer Creek, Benjamin Slough, and Spring Creek. Turn left onto 2400 West, 1.1 miles into the ride, and head north. The riding out here can be peaceful and pastoral, as you pass by farms and country homes. Turn right onto 6000 South at mile 2.75 and head east, followed by a left onto River Drive. This road is parallel to the Spanish Fork River. Turn right onto 5600 South and head east, followed by a left onto 1850 West. Next turn left onto Palmyra Drive, which runs diagonally toward the northwest, with the Spanish Fork River now off to your left.

Palmyra Drive enters the unincorporated community of Palmyra (population 491 in 2010). The original Palmyra was absorbed into the city of Spanish Fork years ago; later, this settlement, a “new” Palmyra, was established. Bear left at 5000 South, and then bear right, just up the road, to continue on Palmyra Drive. At the end of Palmrya Drive, keep straight onto SR 77 (mile 6.0). The highway curves to the left and heads south. Turn right onto 5200 South (mile 7.45) and head west, now on the fringes of the Lake Shore community (population 817 in 2010). Turn left onto 4400 West, followed by a right onto 5400 South, followed by a left onto 4800 West. Plenty of turns, but these all come at the ends of the respective roads. After heading south on 4800 West, turn right onto 6300 South (mile 10.8) and head west, toward West Mountain. West Mountain rises to 6,804 feet, and is considered to be part of the Wasatch Mountains, even though it is entirely detached from the rest of the range. 6300 South becomes 6400 South as it descends, gradually, to cross Benjamin Slough.

After climbing away from the slough (6.2% grade), the road curves to the right, becoming Lincoln Beach Road. The road hugs the east side of West Mountain. A dirt access road, on the left, leads to the top, where there are radio towers and an observatory. Lincoln Beach Road approaches Utah Lake, at Lincoln Point, with Lincoln Beach Park on the right. The park features camping, boating and fishing, and was formerly an active beach.

Follow Lincoln Beach Road as it curves around Lincoln Point, with Utah Lake immediately to your right. You are now on Lake Road. This is the ride’s lowest elevation (4,490 feet), although it is not much lower than the starting elevation (4,531 feet). Off in the distance is Bird Island, Utah Lake’s only island. The island is not large enough for habitation, but is a popular fishing spot. Beyond Lincoln Point, you are on the west side of West Mountain, with unobstructed views of the lake to your right.

The next eight miles are along this undeveloped stretch – not a park, but certainly having a park “feel.” The southern end of Utah Lake, which is Goshen Bay, can be seen from the road. Utah Lake’s shallow depth (14 feet maximum), dominant carp population (some 90% of all fish), and sewage dumping that continued until 1967, all contribute to a damaged lake ecosystem. At the 21.2-mile mark, after some mild undulations, the road climbs at a 2.5% grade to 4,630 feet. Leave the lake’s side at mile 22.7, as the road curves left to enter Genola. Although Genola is the largest town along the route, you won’t witness much hustle and bustle.

Lake Road curves to the right at mile 24.55, becoming Main Street. Turn left onto 1600 North; the road curves to the right, becoming Hillside Drive, and then curves to the right again, becoming 800 East. You are now heading south, through Genola. At mile 27.6, make a hard left onto SR 141 and head northeast. The highway climbs gradually to the highest elevation of the ride (4,808 feet), before beginning a gradual descent into the community of West Mountain. After winding its way off the flanks of West Mountain, the highway curves to the left and heads north (mile 30.45). SR 141 becomes SR 147 at 10400 South – keep straight, heading north. It is long, straight stretch to 7300 South (mile 35.9), where SR 147 curves right to head east, returning you to Benjamin. The ride ends at Benjamin Park, on the right, at mile 38.75. 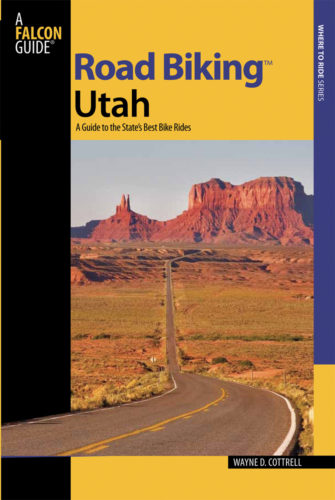