The Tushar Mountains Challenge is a 42.3 mile out-and-back ride that starts in the southwestern Utah city of Beaver. The ride climbs into the high mountains east of the city, to the end of the paved highway, and then turns around for the return descent. The elevation ranges from 5,940 feet at the start of the ride to 10,010 feet near the turnaround point. The 20-plus miles of sustained climbing make this a challenging outing. In fact, the route covers the opening portion of the “Crusher in the Tushars” race, promoted by Utah cycling star Burke Swindlehurst, and features a mixture of road and dirt surfaces. Yet, do not let the route’s attractiveness to toughened, elite riders dissuade you from attempting it. In fact, once you conquer the long ascent, an equally long and exciting descent awaits. 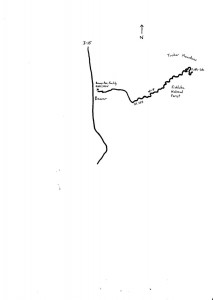 The ride begins in Beaver, which had a population of 3,112 in 2010. Beaver is located along the I-15 freeway, and is easily accessible. The city is compact, although its population increased by over 50% between 1990 and 2010. Plenty of the city’s houses are on the National Register of Historic Places, and I would encourage you to do some exploring. Other than a rich architectural history, the city’s claims to fame include it being the birthplace of Philo T. Farnsworth (“father” of the television), the hometown of outlaw Butch Cassidy, and the best tasting drinking water in the world, according to a year 2010 global contest. You will want to treat yourself to some of the municipal water before, during, and after the ride. Beaver’s latitude is such that temperatures tend to be about five or more degrees warmer than farther north in the heavily populated Wasatch Front area. Beaver’s high altitude keeps it much cooler, however, than southern Utah cities such as St. George.

Start at the Beaver City Recreation Facility at 465 East 300 North (i.e., east of Main Street). Head east on 300 North, through a residential area, turning right onto 1200 East. At the stop sign, turn left onto 200 North, which is State Highway 153. The highway climbs gradually. A paved bike path appears on the left at 1.3 miles into the ride, adjacent the Beaver Canyon Campground. The path ends at mile 1.9, near the entrance to the Canyon Breeze Golf Course. Beyond this point, the Tushar Mountains loom on the horizon, with a mixture of sweeping vistas, pastoral scenes, and juniper trees. The Tushars are Utah’s third highest mountain range – Delano Peak, the range’s high point, reaches up to 12,174 feet. Until the highway begins to climb steeply, the Beaver River will be on your left or right. Enter Fishlake National Forest at mile 4.2. The road gets steeper at mile 8.0, and steeper still at mile 10.3. Gradients range from 9 to 10%. As the highway emerges from the canyon, spectacular cliffsides and steep drop-offs come into view (see photo). The grade eases around mile 12, as the highway enters an alpine environment (Ponderosa pines, and other evergreens). I observed a number of large rocks in the road, so be prepared to make evasive maneuvers. (Watch for motor vehicles when making such maneuvers, although the highway was carrying no more than 500 vehicles per day in each direction in 2010).

There are restrooms on the left at mile 14.8. The road tilts upward once again at mile 16.2; from here, the climb is sustained at about a 10% grade all the way to the summit. Leave Fishlake National Forest at mile 17.7. As you near the summit, a few homes and condos dot the landscape – the Eagle Point Ski Resort is nearby. The highway crests the 10,010-foot summit at mile 20.1, after a net gain of over 4,000 feet since departing Beaver. You may be inclined to turnaround here, as the highway begins to descend the other side of the mountain. Keep riding, though, as you would not want to miss the view of Puffer Lake at mile 21.0, on the left. The end of pavement is just beyond the lake, at mile 21.1 (the unpaved highway continues eastward into Piute County). The long downhill into Beaver awaits, but first up is a 1.0-mile climb at an 8% grade, back to the summit. Once over the crest, enjoy the pedals-free descent!