By Wayne Cottrell — Trappers Loop is the name of the highway that connects Ogden Valley with Morgan Valley, traveling up and over a ridge in the Wasatch Mountains. A bike ride including Trappers Loop is a rite of passage for many Utah cyclists, making this a popular route. This version of Trappers Loop – the bike ride – starts and finishes in Mountain Green, using Trappers Loop (which is State Route 167) outbound, and Snowbasin Road (State Route 226) inbound. The 26.65-mile ride packs 2,880 feet of climbing, although none of the climbs are steeper than a 6% grade. Nearly the entire ride is within the Uinta-Wasatch-Cache National Forest, even the lower elevation portions.

The Trappers Loop highway commemorates the era of fur trappers, who frequented northern Utah during the early 19th century. Their era post-dated the long history of Native American tribes, and pre-dated the arrival of Mormons. The community of Mountain Green, where the ride starts and finishes, was the legendary meeting point, in 1825, of three prominent trappers: Peter Skene Ogden, John Henry Weber, and Étienne Provost. Each man traveled with a team of trappers. While Ogden and Weber disputed territory, it was actually the Canadian Provost who had a legal claim to the land in the area. You can retrace some of the steps that those hardy pioneers took by completing this ride. 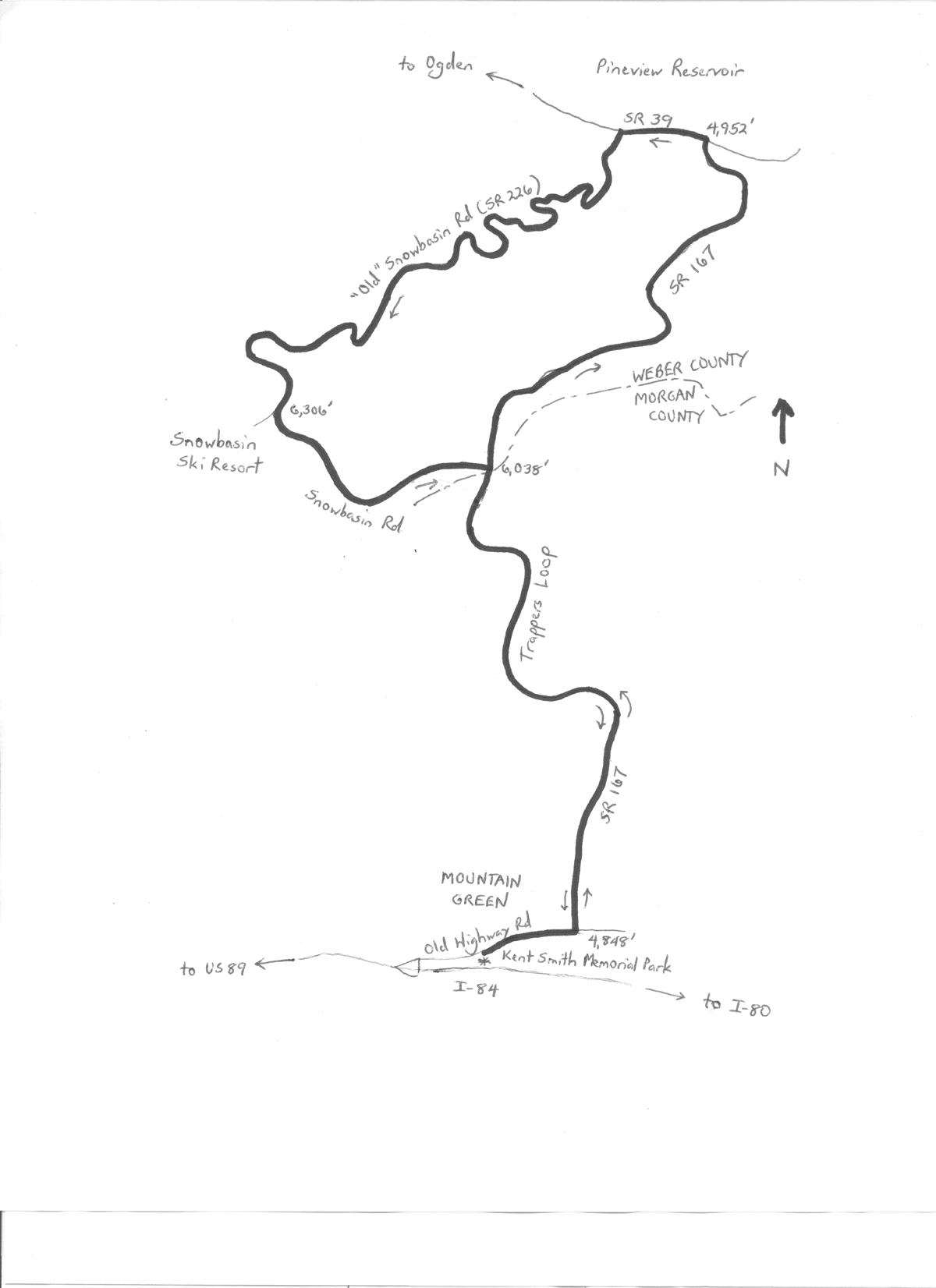 Start at Kent Smith Memorial Park in Mountain Green. Although “memorial park” might conjure up an image of a cemetery, this park features ball fields, volleyball nets, picnic tables and playground equipment. The park is located at 5457 West Old Highway Road (also known as Old Highway 30, and as State Route 167). From Salt Lake City, head north on I-15, exit to U.S. Highway 89 north, and then head east (south) on I-84. Take the very first exit after leaving Weber Canyon; turn left, and then turn right onto Old Highway Road. The park will be on the right. Mountain Green is an unincorporated community that is the gateway to Morgan Valley when coming from the west. The starting elevation is 4,848 feet; head east on the road. At mile 0.4 (there is a convenience store on the corner), turn left to head into the mountains, on State Route (SR) 167. The climb is not particularly steep, starting at a 3% grade, and then increasing to 4%, but it is steady. The highway finally crests at mile 5.85, at the junction with SR 226 (Snowbasin Road). Keep straight here – the route returns to this junction later. Your elevation is 6,038 feet. After about one-half mile of false flat, SR 167 descends. The highway is steeper on this side of the ridge (6% grade) than on the side that you climbed. The descent is somewhat dramatic, with a sweeping curve to the left, and then to the right as the highway starts to level. Picturesque Pineview Reservoir is in view in the distance. Turn left onto SR 39 at the bottom (mile 9.9, elevation 4,952 feet), and ride along the south side of the reservoir. There are a few lakeside residences, as well as Anderson Cove Campground. After just under one mile, watch for motor vehicle traffic, and make a left turn onto Snowbasin Road (SR 226) to begin the ascent (mile 10.85).

While SR 167 is comparatively sleek, with its high-speed turns and steady grades, Snowbasin Road is a classic, winding, two-lane mountain road. There are plenty of twists and switchbacks as the road makes its way up the mountain, at an average grade of 6%. Please note that this is the “old” Snowbasin Road, in that this was formerly the main access to the Snowbasin Ski Resort. With the newer road connecting to SR 167 toward the top of the ridge, the older road receives minimal maintenance, and is in fact closed during the winter. Some have noted that the road even moves on the underlying, unstable soil, making for an uneven road surface in places. A segment of the road was indeed closed for several years during the early 2010s, but it has since reopened. Ensure that the road is open before venturing out; the best resource would be the Utah Department of Transportation. The road straightens after crossing East Fork Wheeler Creek – but the climbing continues! The access road to the Snowbasin resort is at mile 17.8, at an elevation of 6,306 feet. The resort welcomed several of the alpine skiing events of the 2002 Winter Olympic Games, including downhill, super G, and alpine combined (downhill and slalom). The men’s events were dominated by skiers from Austria, Norway, and the U.S., who won all nine medals. The women’s events were dominated by Janica Kostelić from Croatia, who won two of the three events, including a whopping-for-skiers 1.5-second margin in the combined. The men’s downhill course, designed by Swiss Olympic champion Bernhard Russi, started at an elevation of 9,288 feet, and featured over one-half mile of vertical drop at an average grade of 31%!

The climb continues beyond the access road, finally reaching a crest at mile 18.75 (elevation 6,623 feet). The descent begins immediately (6% grade), although there is a short uphill after about one mile. The descent continues from there. Turn right onto SR 167 at the end of Snowbasin Road (mile 20.8), and enjoy the long downhill into Mountain Green. Turn right at the bottom, onto Old Highway Road (cosigned as SR 167), and return to Kent Smith Memorial Park, which will be on the left.