This 62.4-mile (almost exactly 100 km) out-and-back ride travels along flat terrain in Cedar City, and hilly terrain to the west of the city. The hilly terrain is found within the Iron Mountains, which rise to 7,815 feet. The Swett Hills and Harmony Mountains are immediately adjacent to the Iron Mountains, extending the hilly terrain over a broad expanse. The Iron Mountains are so-named because of their rich repositories of magnetite and hematite, common mineral resources for iron. Cedar City is at an elevation of about 5,700 feet in the vicinity of the start-finish area. The low point of the ride is at 5,450 feet, on State Highway 56 west of the city. The route peaks at 6,560 feet in passing through the mountains, such that the high-low altitude differential is just over 1,200 feet. The ride is flat for the first seven miles, climbs for 13 miles, and then descends for 11 miles, before returning to retrace the profile in the reverse direction. Most of the ride is on State Highway 56, partially duplicating the route of the annual Utah Summer Games road race.

The ride starts and finishes at Bicentennial Park, located on the north side of Cedar City, at 1045 North and North Cedar Boulevard. Cedar City, with a population of 29,213 in 2011, is known as Festival City, with several annual cultural events (Utah Shakespeare Festival, Groovefest, Neil Simon Theatre Festival, Utah Summer Games). Cedar City is also home to Southern Utah University, which proudly includes U.S. Senate majority leader Harry Reid among its alumni. Turn left onto 1045 North; at the stop sign, turn right onto Coal Creek Road. The road flies over I-15, and then bends to the right, becoming Bulldog Road (in reference to a local high school mascot). Turn left onto Kitty Hawk Drive. You are now near the Cedar City Regional Airport, which can accommodate commercial jet aircraft. Turn left onto Airport Road at mile 0.9, and head south. At the traffic signal, turn right onto 200 North (State Highway 56). You are now on the western edge of the city, heading toward the distant mountains. The highway gradually narrows to two lanes, while the speed limit increases to 65 mph (how is that for a combination!). The highway bends to the left at mile 6.2 – stay on the main highway. At mile 6.6, you will notice that the pedaling starts to become labored as the highway starts to climb. The climbing begins in earnest at mile 9.5 – the mountains are ahead.

Enter a forested area at mile 13.2; the highway brushes by Dixie National Forest, which is to the south. The climb is steady along this segment, although the gradient varies. Underneath the trees, underground, are the veins of ore that keep mining active in the Cedar City area, although not nearly at the levels of the late 19th and early 20th centuries (when the local economy was almost entirely dependent on mineral resources). Iron, copper, silver and gold can be found in the mountains, although legend has it that Mormon pioneer leader Brigham Young did not care much for silver and gold. The climb reaches a “preliminary” crest at mile 18.0. The landscape is picturesque, with rolling hills dotted with the low trees (pinyon pine and juniper) that are plentiful throughout Utah. After a short descent, the climbing continues to mile 18.6, after which the highway begins to roll. This is the crest through the Iron Mountains; the descent down the west side of the mountains begins at mile 20.0. An expansive vista opens up at mile 21.7. Silver Peak (elevation 7,273 feet), which, with its rugged face, appears somewhat hostile, is off to the right. The highway descends toward Escalante Valley, then levels off at mile 30.5. Enter the town of Newcastle at mile 30.9; this is a small, farming community (population 247 in 2010) that is home to some excellent geothermal resources. A solar energy zone, as designated by the Bureau of Land Management, is also nearby.

Turn around at Main Street – a convenience mart is located at the intersection. Begin the return trip here, heading east on State Highway 56. The return ride is the reverse of the outbound ride. The profile is essentially climbing for 11 miles, a descent for 13 miles, and then flat for the final 7 miles. The return ride’s scenery is punctuated by the Hurricane Cliffs in the distance. These mountains actually begin at the Grand Canyon in Arizona, and run to the north-northwest for some 135 miles. The Cliffs provide a striking backdrop for Cedar Valley, which Cedar City occupies. Enjoy the return ride – be particularly patient and cautious when making the left turn onto Airport Road from Highway 56. 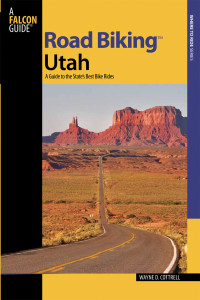 The Ogden Bicycle Collective is Raising Funds For New Building