Follow Yellow Creek Road is a 35.5-mile, out-and-back route, starting and ending in Evanston, Wyoming. Be sure to carry your passport with you, as the road leaves Wyoming, enters Utah, and then returns to Wyoming. The entire ride remains on Yellow Creek Road, although there are enough turns and curves to keep the trip interesting. Yellow Creek was used for the time trial stage of the former High Uintas Classic bicycle race. Follow Yellow Creek Road goes well beyond the length of that race’s time trial, though, all the way to the end of pavement. Elevations on the ride range from 6,784 feet just outside of Evanston, to 7,355 feet at the turnaround, for a differential of 571 feet. Any climbing along the route is gradual, with no gradient exceeding about three percent. Yet, be prepared for some high-altitude riding, including cooler temperatures than at lower altitudes. There is little climbing, as indicated, but Wyoming’s winds can be notorious.

The ride starts and ends at the Overthrust Ball Fields, located on Yellow Creek Road just north of I-80 in the city of Evanston. The elevation at the park is 6,811 feet. The city had a fairly stable population of 12,090 in 2016. Evanston was established during the construction of the Transcontinental Railroad, in 1868. Although the rail line moved to Wasatch, about 12 miles to the west, for a while – and Evanston was briefly abandoned – operations returned to Evanston a few months later. Evanston would become a supply point for timber, and as a water stop for cross-country trains. Also, coal was mined in Almy, to the north. Later, Evanston became an important stop on the Lincoln Highway, the country’s first transcontinental road. After growing slowly during the 20th century, the population nearly doubled during the 1980s, when there was an oil boom. Natural gas is also extracted in the area. All of these transportation-related resources have kept Evanston alive as a city. Yet, one of Evanston’s greatest claims to fame may be one of the first J.C. Penney stores in the U.S., opening in the early 1900s. Another of Evanston’s claims to fame is that city residents, given the option, by the state of Wyoming, of having a college, or a sanitorium, chose the latter!

Exit the Overthrust Ball Fields parking area, and turn left onto Yellow Creek Road. Yellow Creek immediately passes under I-80. The underpass is narrow, so a safe option would be to use the walkway. The first three miles of the ride are within Evanston, so there will be a few traffic controls (signals and stop signs). Yellow Creek passes through an Evanston neighborhood. The housing in this neighborhood is no older than 30 years or so, unlike the much older residences near the center of the city. At the intersection of Yellow Creek, Overthrust Road, and Arrowhead Drive (mile 1.75), turn left to continue on Yellow Creek. You are now heading south. Yellow Creek curves to the right, to head west at mile 2.75. The road leaves Evanston along this stretch, entering classic, rural Wyoming. Development out here is sparse. The road curves to the left to head southwest, passing through Sulphur Hollow, and then Burton Hollow; there is not much to see in either place – at least not from the road. After another righthand curve, the ride reaches its lowest elevation (6,784 feet).

From here, Yellow Creek Road rolls, climbing gradually, while curving gently to the left and right across the landscape. If you are wondering about Evanston’s timber, it came from the forested mountains to the south – certainly not from out here! The road enters Utah at mile 8.1, now at 6,886 feet. Around mile 11, the road’s namesake creek can be seen running to the left, near the road. The road also tops the 7,000-foot elevation mark along here. Barker Reservoir is crossed at mile 11.8. Return to Wyoming at mile 12.75, now at 7,070 feet. The road crosses Chicken Creek at mile 13.45, followed by a short but sharp descent, and then a return to gradual climbing. There is a cattle guard at mile 16.0. One quarter-mile later, the paved road turns to the right, while Yellow Creek continues heading south as a dirt road. (The road eventually returns to Utah, becoming Chalk Creek Road). Veer right and stay on the paved road; the road narrows, and the surface deteriorates. There were plenty of cracks in the pavement when I checked it, but it is suitable for riding. You are now climbing at a gradient of 2 to 3%. As if the rougher road is not enough, there is another cattle guard at mile 17.25. This grate is an indicator that you are near the turnaround point. Indeed, turn around one-half mile later, where the road splits into three. The pavement continues for a short stretch, ending at an Anschutz (oil and gas exploration) plant. There is no real need to ride all the way to the plant, so turn around here, at mile 17.75. This is the highest elevation of the ride (7,355 feet).

The return ride simply follows Yellow Creek Road back to Evanston, and then back to the Overthrust Ball Fields. It is a net descent until you are about a mile-and-a-half outside of Evanston; from there, the road is more-or-less flat. Once in Evanston, be sure to turn right at the intersection with Arrowhead and Overthrust, to remain on Yellow Creek Road. If you have time, be sure to descend into central Evanston, to view some of the city’s historical sites and buildings. 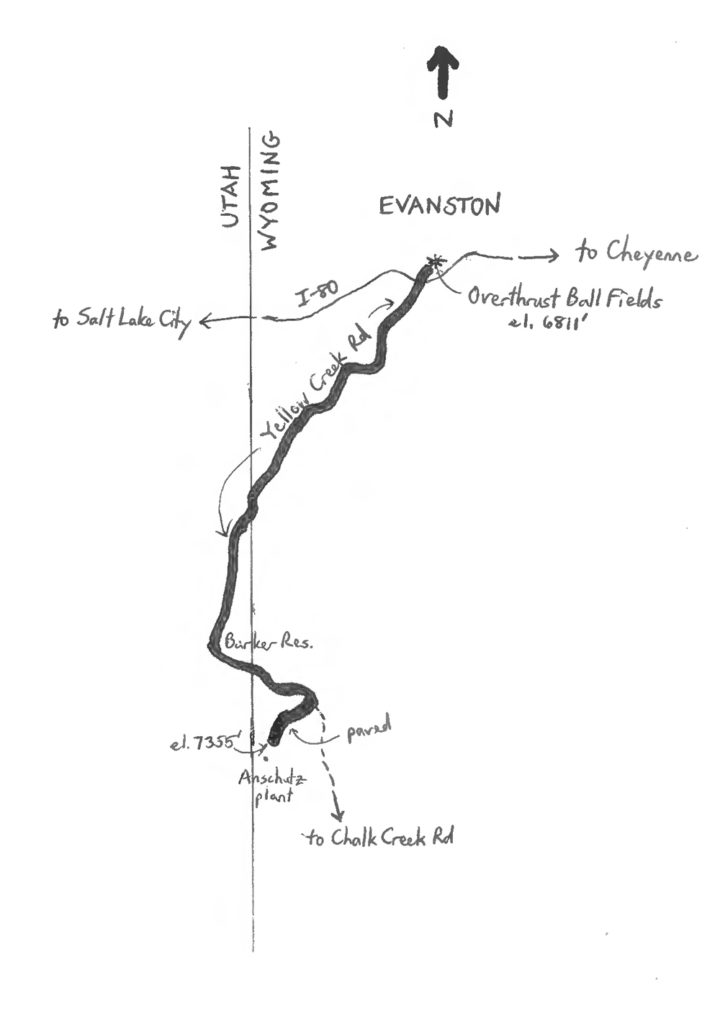