The Dixie Legacy Classic is an 80.7-mile out-and-back ride featuring long, steady climbs and descents and some rolling hills. The route starts and finishes in St. George and visits the Legacy Loop Highway, Dixie National Forest, and Snow Canyon State Park. The cyclist should be prepared for high desert temperatures during the summer months, although the middle part of the route is at higher elevations, where temperatures are cooler. The elevation ranges from 2,560 feet at the start in St. George to 6,576 feet at the turnaround in Pine Valley. The route incorporates city streets, state highways, paved bike trails, a state park road, and county highways.

The Dixie Legacy Classic starts in the city of St. George, which is located about 300 miles south of Salt Lake City and 120 miles northeast of Las Vegas, Nevada. St. George was founded during the 1850s under the direction of Mormon church leader Brigham Young, and was the eighth most populous city in Utah as of year 2010 (72,897). Growth is evident in St. George, as the city has sprawled in nearly all directions. Traffic volumes can be heavy on the city’s major roads and at major intersections. Cyclists can avoid a lot of the street traffic by using the city’s “trail” system, which is actually a network of paved bike paths, or by simply riding toward the city’s outskirts, as the Dixie Legacy Classic does. 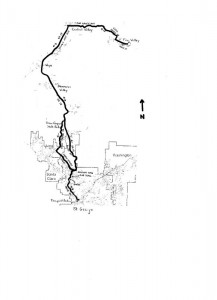 Start the ride at Tonaquint Park, located at 1851 South Dixie Drive in St. George. Exit the park and turn right onto Dixie Drive. The shoulder width varies along this stretch of road, as does the number of lanes. The St. George Municipal Airport sits atop the mesa to your right, some 200 feet above the city. Turn right onto 540 North at mile 3.3, and then immediately bear left to enter the trailhead to the Halfway Wash Bike Trail (a paved bike path). The trail crosses under Snow Canyon Parkway at mile 5.2. Just beyond the underpass, turn right onto the connector path, and then turn left onto the path that parallels Snow Canyon Parkway. The path is little more than a striped sidewalk along this stretch. Follow the path as it turns left at the intersection with SR 18. The path parallels SR 18 for the next 7.5 miles. Although the path is an alternative to SR 18, which gets less busy as you travel farther north, the path is actually more physically demanding than the highway. While the highway negotiates gentle grades and false flats, the path undulates over steep climbs and descents. Take your pick. There are a few crossings along the path that will require you to watch for cross-traffic. The path ends at Snow Canyon Drive, at mile 13.2, adjacent the entrance to Snow Canyon State Park. Turn right here to return to SR 18. Then, turn left onto SR 18, and continue heading north.

The highway begins to climb north of Snow Canyon Drive as it heads into the aptly named Red Mountains. The climb finally crests at mile 17.0. Once you are beyond the confines of the mountain range, the Bull Valley Mountains in the distance come into view. The Pine Valley Mountains are to the east. Enter the Dammeron Valley area at mile 19.0. Dammeron Valley is a planned community, nestled against the Cedar Bench, established around 1976.

A 7% descent takes you out of the Dammeron Valley and toward the wash of the Santa Clara River, at mile 21.9. Veyo Volcano is the prominent peak on the left. Although the volcano has not erupted anytime since at least 1,000 years ago, it represents one of the youngest eruption centers in the St. George region. The volcanism in the region has suggested the presence of geothermal energy resources. Enter the community of Veyo shortly after crossing the wash. There are a couple of mini-marts along the highway. Veyo was settled in 1911 as Glen Cove but was later renamed by Mormon “Beehive” girls (12- to 13-year-old participants in a young women’s organization). The young girls created “Veyo” as an acronym of virtue, enterprise, youth, and order. Very clever! The highway climbs out of Veyo, roughly following the reverse course of the Santa Clara River.

From Veyo north to Central Valley, the course traces a portion of the route of the Red Rock 200 bike race. The climb crests at mile 23.6; begin false flats, followed by rolling terrain, and then a descent, at mile 26.0. The downhill gets steeper at mile 27.5. At mile 29.1, turn right onto Pine Valley Highway, in the community of Central Valley (population 528). Central Valley is the starting point for the St. George Marathon, held each October. Enter the Dixie National Forest at mile 30.7 and begin a steady climb. The Pine Valley Mountains, shooting up to 10,365 feet (Signal Peak), are on the horizon. The gradient eases at mile 35.5, from which the terrain rolls, and then descends. The highway bends right at mile 36.7, becoming Grass Valley Road. As the gradient eases, the road enters the community of Pine Valley.

The descent into Pine Valley seems to be from a storybook. Pine Valley was settled in the mid-1850s and was so named for the abundance of ponderosa pines, along with conifers, in the area. Lumbering was the community’s first industry, but today the town attracts recreationalists and seasonal “getaway” homeowners. Turn left onto Main Street at mile 37.4. The Pine Valley Chapel and Tithing Office are on the corner. The chapel is the oldest functioning Mormon chapel in Utah and is on the National Register of Historic Places. The building was designed by Ebenezer Bryce, the namesake of Bryce Canyon. Bryce, a former shipbuilder from Australia, applied his seafaring knowledge by designing the church to resemble the hull of an upside-down ship. Head east up Main Street, toward the mountains. The peacefulness may, unfortunately, be broken by the proliferation of ATVs (all-terrain vehicles). The road enters the Pine Valley Recreation Area after 1 mile; this is the turnaround point.

The return trip is the reverse of the outbound route until SR 18 arrives at Snow Canyon Park (mile 65.1). Here, turn right and enter the park. There are entrance stations at either end of the park, and one or both of them may be manned. In any case, be prepared to pay the $5 entrance fee either via self-service or a park ranger. Begin the descent into the park. The desert scrub and forestation of the first three-fourths of the ride gives way to the barren but extremely colorful sandstone of Snow Canyon. Wildlife also includes coyotes, desert tortoise, kit foxes, canyon tree frogs, leopard lizards, roadrunners, quail, and gopher snakes, along with the protected peregrine falcons and Gila monsters. Plant life includes creosote bush, blackbrush, desert willow, sand sage, and narrow-leaf yucca, along with scrub oak. The canyon descent can be completed fairly rapidly, but take time to absorb some of the desert life. Exit the park, and enter Ivins (population 6,753) at mile 71.0. An access road to the Tuacahn Amphitheater is on the right, just ahead. The outdoor theater features live productions and concerts.

Turn left onto Snow Canyon Parkway at mile 72.5. Leave Ivins and enter St. George. The parkway passes through some of the city’s newer residential areas. The parkway widens from two to four lanes as it sweeps toward the southeast, then east. Turn right onto 1300 West, at mile 76.1, just as the road begins to climb. Turn right again at the next street, 1390 North, to access the Halfway Wash Bike Trail. Bear left onto the trail, and begin the gradual 2-mile descent past more St. George neighborhoods. The trail’s speed limit is 20 mph, which is certainly an upper limit given the sharp curves. The trail ends abruptly at the intersection of 540 North and Dixie Drive, at mile 77.4. Cross Dixie Drive, turn left, and head south. The road crosses the Santa Clara River at mile 78.2. Continue heading south; the stately West Black Ridge is to the left. The ride ends at the entrance to Tonaquint Park, which is on the left at mile 80.7, just north of 600 West. The park is a pleasant place to cool down, with a water conservation garden, nature center, restrooms, and drinking water. 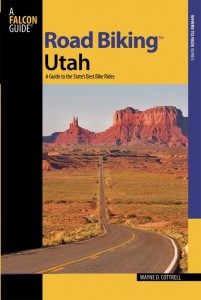 The Heat is On: Calorie Needs of Cyclists

Ali Black Balances Family, PTA, and a New Career as a...

Skirts Made for the Ride