The Cache Valley North Cruise is arguably the “perfect” cycling loop because of its format: a ride that uses lightly trafficked roads that pass through small settlements, almost at evenly spaced intervals, with a few changes in terrain but no major climbs. The 40.3-mile ride starts in Smithfield and visits Amalga, Newton, Clarkston, Trenton, Lewiston, and Richmond in northern Cache County. The elevation varies from 4,413 feet across Clay Slough, between Amalga and Newton on SR 218, to 4,882 feet south of Clarkston on SR 142. The preferred route direction is clockwise so that most of the turns will be to the right.

Start at Richard V. Hansen Baseball Park in Smithfield, on SR 218 (100 North), near 400 West, 0.7 mile west of US 91. Smithfield is located in “northern” Cache Valley, which was once occupied by bands of the Northwestern Shoshone. During the early nineteenth century, Jim Bridger and other “mountain men” stashed their furs here, regularly returning to rendezvous and check on their “cache.” The fertile land makes the Cache Valley one of Utah’s most productive agricultural regions. The dairies here are also highly productive, with cheese topping the list of foods. Cycling is popular in Cache County, and you are bound to see other riders on this route. The roads of the Cache Valley North Cruise take in some roads that are used annually for cycling events, including the two-day MS 150, a metric century for women (Little Red “Riding” Hood), and a road race, starting in Newton, which periodically serves as the state championship. The Richmond-to-Smithfield portion of the ride traverses the same route as Lotoja (albeit in the opposite direction), an annual 203-mile event that is the longest one-day bicycle race in the United States. 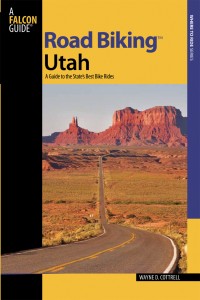 Smithfield (population 9,535 in 2008; Cache County’s second-largest city) is located some 7 miles north of Logan. The city is named in honor of John Glover Smith, the area’s first Mormon bishop. Head west from Richard V. Hansen Baseball Park on SR 218. You will pass through Amalga (population 480, named for the Amalgamated Sugar Company, a sugar beet processor) and Newton (population 803; the name is a shortened form of New Town). In Newton, SR 218 becomes SR 23, then SR 142. The latter highway bends right and heads north to Clarkston (population 754, named for Israel Justus Clark, an interpreter of Native American languages who settled here), then right again in Clarkston to head east to Trenton. The Martin Harris Pageant, a musical re-creation of pioneer and Mormon history, is held each August in Clarkston.

After a surprisingly steep descent, and after crossing SR 23, enter Trenton (population 510, named after Trenton, New Jersey—true). Once east of Trenton, get off the highway by turning left to head north on 1600 West. This road will take you into Lewiston (population 2,030, named after William H. Lewis, the local ward’s first Mormon bishop), a sprawling city that stretches to the Idaho border. Turn right and head east on SR 61, into the center of Lewiston. Turn right onto Main Street (there are a mini-mart and vending machines on the corner, as well as a park), and head south to 1600 South, where you will turn left to continue heading east. The road bends right, then left, descending to cross the Cub River (allegedly named by Brigham Young), then climbing, until eventually intersecting with US 91. Turn right, onto the wide shoulder. Enter Richmond (population 2,364; conflicting accounts on the origin of the name)—note the Pepperidge Farm (yummy!) factory on the right. Richmond is home to Casco (Fat Boy ice cream sandwiches and Casco ice cream bars—you surely deserve one of these if you complete this course) and Sego Milk (evaporated milk). Continue through Richmond on US 91; enter Smithfield some 4 miles to the south. Turn right at the signal to return to SR 218. Look for the Richard V. Hansen Baseball Park on the left, less than 1 mile after making the turn. The park is named in honor of Richard Hansen, the longtime coach of the Smithfield Blue Sox, a semipro baseball team that has won several state championships.