The Bear Lake Cruise is one 51-mile lap of Bear Lake in northern Utah and southern Idaho. The preferred direction is clockwise, such that the rider remains on the lakeside of the road. The ride uses US 89 and SR 30 on the western side of the lake, and Eastshore Road (in Idaho) and North Cisco Drive and East Cisco Drive (in Utah) on the eastern side. Contrary to what many maps indicate, all of the roads on the east side of the lake are paved. The lap around the lake is relatively flat, except for a few rolling hills along the northerly stretches of the east side. The elevation ranges from 5,927 feet along North Beach to 6,040 feet adjacent Indian Creek, on the east side of the lake. Pavement is smooth on the west and south sides of the lake, and fair on the north and east sides of the lake.

Start at Garden City Park, 450 South Bear Lake Boulevard, Garden City, 0.5 mile south of the junction between US 89 and SR 30. Start your ride early during the summer months to avoid traffic on US 89. To avoid traffic, the best times of year to ride are before Memorial Day and after Labor Day.

Most drivers will arrive at the lake from the southwest, via US 89. From I-15 north, exit toward Logan via US 89/US 91. Traverse Sardine Canyon to enter the Cache Valley. The highway heads directly into the heart of Logan. After making a right turn at 400 North to continue on US 89, head northeast into Logan Canyon. It is about 40 miles to the lake from here. The Logan Canyon drive ascends to the Bear Lake Summit (elevation 7,800 feet) before making a twisting descent to Bear Lake. 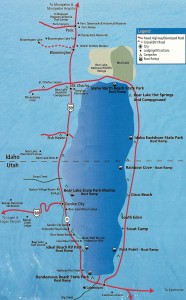 Bear Lake—the so-called Caribbean of the Rockies—straddles the Utah–Idaho border in the extreme northern corner of Utah. The freshwater lake, shaped like a long, skinny oval, is 112 square miles in area, 22 miles long, and 6 to 8 miles wide. It is not Utah’s largest lake (that would be the Great Salt Lake), nor even Utah’s largest freshwater lake (that would be Utah Lake), but is arguably the most scenic. The clear turquoise-hued waters are striking, especially in changing lighting conditions. The colors are created by natural limestone and calcium carbonates suspended in the water. As described by Joseph Rich, an early settler after whom Bear Lake’s county is named, “Only men with plenty of hair on ’em are tough enough to stand the climate of Bear Lake, but what a country! Streams full of fish; the most beautiful lake on earth…”

While the lake roads will generally be clear (of snow) year-round, getting to the lake from the southwest, along US 89 through Logan Canyon, may be a challenge during and following winter storms.

Approximately half of the ride is in Idaho, in aptly named Bear Lake County. North of Garden City, you will pass through the settlements of Lakota. There are plenty of unobscured lake views, and it can be windy at times. When you reach St. Charles (Idaho, population 128 in 2008), you are at the northern edge of the lake. The Gutzon Borglum Monument (sculptor of the presidential faces at Black Hills, South Dakota) is on the left at mile 11.8. Turn right onto North Beach Road at mile 13.5.

As you ride along the northern edge of the lake, you will notice the dike. The structure is there to divert the Bear River into the lake. On your left will be the Bear Lake National Wildlife Refuge, followed by Mud Lake; on your right is Idaho North Beach State Park. The road makes a short climb, then bends right, toward the south. The east side of the lake is very quiet, with no towns, and a few small subdivisions, beaches, and lakeside campsites. This portion of the course features nearly constant scenic views of the lake. At the southern end of the lake, the road bends to the left, away from the lake, preparing for entry into Laketown (population 191 in 2008). Turn right onto SR 30 in Laketown for the return trip to Garden City, on the west side of the lake. Besides the four towns and settlements through which the ride passes, you will observe a “new type” of community as you circumnavigate the lake: private resort developments that capitalize on the lake’s vivid scenery and recreational opportunities. Evidence of this is clear in Pickleville, about halfway between Laketown and Garden City on SR 30. (On the plus side, the Pickleville Playhouse features musical-comedy performances during the summer.) Continue north on SR 30 to Garden City. Look for Garden City Park as you near Garden City’s “center.”

5 Steps to Progress After A ‘Face-Plant’ Race Performance

You Can Lead a Cyclist to Water, But What, When, and...

Route Announced for 2012 Tour of Utah – Race Lengthened to...