Heber Valley may be Utah’s most scenic, with a picturesque backdrop of the Wasatch Mountains to the west, the West Hills to the north, the Uinta Mountains to the east, and Hogsback Ridge and Wallsburg Rise to the south. One author has noted that the title “Switzerland of America” is overused, with a number of places making that claim. But a number of Swiss immigrants actually did settle in Heber Valley during the 1860s because of its resemblance to home. Charleston to Wallsburg via Deer Creek is a 27.85-mile, out-and-back ride with a 996-foot net elevation change, and just over 1,100 feet of climbing overall. The climbing is gradual, rather than steep.

The ride is somewhat unusual in that it visits two communities – Charleston and Wallsburg – that have actually lost population since their turn-of-the-20th-century heydays. Weep not for the two towns’ losses, though, as both are small and pleasant, with stable economies and attractive country lifestyles.

Start the ride at the Charleston Day Use Area in Deer Creek State Park, located just off State Highway 113 (UT 113) near the northern border of Charleston, just south of Charleston Bridge. Charleston is located directly south of Midway, and southwest of Heber City. The starting elevation is 5,428 feet. Charleston was settled in 1859 by Mormon families, and reached its peak population of 524 in 1910. As of 2016, the population was 471, and was gradually growing. The town was known for its Hereford cattle, which were raised here. A portion of the town was flooded, intentionally, with the beginning of construction of Deer Creek Reservoir, in 1938. The dam and reservoir were not completed until after World War II. Exit the Day Use Area, and turn right to head south on UT 113. This two-lane highway is narrow, but traffic volumes are low. 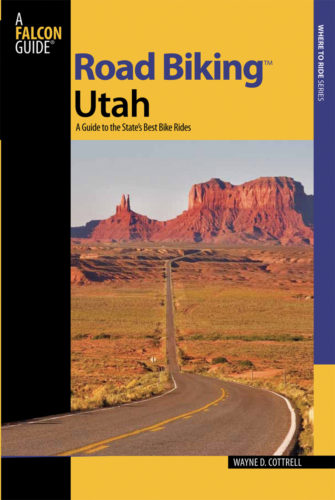 Just under a mile and a half into the ride, UT 113 ends at U.S. 189. Turn right, and head southwest, adjacent Deer Creek Reservoir and Deer Creek State Park. Note that the name of the park is a bit of a misnomer, as the featured attraction is the reservoir, rather than a creek; also, the reservoir’s main inflow-outflow is the Provo River, rather than Deer Creek.

U.S. 189 travels immediately adjacent the shore of the reservoir, curving to conform to the edge of the lake. Like UT 113, the highway is narrow (but scenic!), until mile four, where there is a widening to four lanes. Depending on the season, you may see sailboats, jet skis, other water activities, and camping. Fishing is year-round, even when the lake is iced over. The highway climbs gradually to 5,568 feet, and then descends at a 2.9% grade. At mile 5.55, veer away from the lake by making a left turn onto Main Canyon Road.

Welcome to Round Valley; this is the road to Wallsburg, with Wallsburg Ridge on the right, and the Wallsburg Wildlife Management Area on the left. After a short, very gradual descent, the road begins to climb gradually. Enter the outskirts of Wallsburg three miles up the canyon. The town of Wallsburg was settled in 1862, and its population peaked in 1900 (528). The town’s population as of 2016 was 340, and was gradually growing. Main Canyon Road curves to the right at mile 8.5, becoming Main Street. Here, the road begins to climb at a mild but steady 2.0% grade. After curving to the left, enter the heart of Wallsburg. Turn right at the Center Street intersection, followed by a left turn onto 200 South. 200 South then curves to the right, becoming 200 East. After a short stretch, 200 East curves to the left, and you are on Main Canyon Road once again. You are now at 5,697 feet, as the gradient increases to 3.0%. Development becomes sparser, as the road climbs above 6,000 feet. Leave civilization altogether at mile 13.1, as the road narrows (elevation 6,227 feet). You are now on Forest Road 046 (enter Uinta National Forest). The narrow road has a low-grade surface, and the gradient increases to 4.6%. The pavement ends at mile 13.9, at the highest elevation of the ride (6,424 feet).

Turn around here, and begin the trip back to Charleston. The road through Wallsburg and Round Valley is downhill, gradually leveling, almost all the way back to U.S. 189. Turn right at U.S. 189 (mile 22.25). Note that the highway narrows from four lanes to two after a mile and a-half. Exercise caution as you navigate the curves, adjacent the lake, along U.S. 189’s two-lane segment. Note that, to the left at mile 25.8, is Deer Creek Island. On the mainland, across from the island, is Island Beach, for yet another lake activity. Bear left onto UT 113 at mile 26.4. Head north, returning to Charleston. The Day Use Area will be on the left, just south of Charleston Bridge.

All Bodies On Bikes Takes On SBT GRVL with 15 Non-Traditional...