The Hovenweep-Navajo Classic is an 88.2-mile out-and-back route in an extreme southeastern Utah. The ride starts and finishes in Bluff, which is located 100 miles south of Moab along U.S. Highway 191. The unincorporated town of Bluff, with a population of 320 in 2010, is located 25 miles north of the Arizona border, 29 miles west of Colorado, and 44 miles from the Four Corners and New Mexico. Running immediately to the south of Bluff is the San Juan River, which forms the northern border of the Navajo Nation. Why bring you to this out-of-the-way corner of Utah? Well, Bluff is a history-laden and peaceful but once -thriving settlement, the town is a gateway to three U.S. States, plus the Navajo Nation, and the engineering mystique of Hovenweep National Monument is nearby. Also, Monument Valley (a Tribal National Park) and Goosenecks State Park are within 20 to 25 miles, to the southwest. An excursion out here is worthwhile, without question. 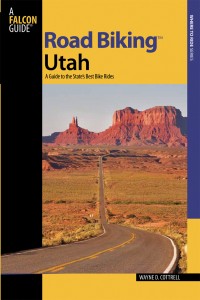 This is a challenging ride, given its length, and the environs can be searing hot during the summer months. Plus, while the opening and closing quarters of the route are on smooth roads, false flats, and rolling terrain; the middle half is on rugged terrain on intermittently rough roads that feature short, steep ascents and descents. There are no extended climbs, but the elevation ranges from 4,320 feet in Bluff to 5,220 feet at Hovenweep National Monument. A large portion of the ride is in remote, unforgiving desert with few, if any, provisions. So be sure to pack plenty of liquids and food, as well as tools, equipment, or a plan should your bicycle experience mechanical problems.

Being an unincorporated settlement, there is no community park here. The best place to stage is the large dirt lot adjacent to Cottonwood RV Park & Cabins, Main Street (US 191) and 400 West, in Bluff (site of the annual Utah Navajo Fair, held each August or September). Signs posted warn against overnight parking, so be sure to complete this ride in one day if you park here. Beware that during special events held in Bluff intermittently throughout the year, parking here may be restricted. Turn left to head east on US 191 (Main Street in Bluff). For an alternative, opening “promenade,” turn left onto 2nd East and head toward the bluffs. Second East is the western boundary of the Bluff Historic District. Turn right onto either Black Locust Avenue or Mulberry Avenue, and pedal east. Observe the pioneer houses, many of which stand in evidence of the community’s wealth during the “golden” ranching era. A brochure titled “Historic Bluff City by Bicycle and on Foot” is available locally. In particular, look for the Bluff library, an old stone structure.

Return to US 191, making a left, then veer right onto SR 162. The route parallels the San Juan River for the next 22.4 miles and passes through a fascinating landscape of eroded sandstone bluffs on your left, the San Juan River on your right, occasionally hidden by groves of low trees, and occasional structures, including St. Christopher’s Episcopal Mission about 1 mile outside of Bluff, along the San Juan River. Open areas along this part of the route feature cattle, horses, and oil-drilling derricks (the underlying ground is rich in petroleum deposits). Upon reaching Montezuma Creek, at mile 16.1, a right turn, followed closely by a left turn, keeps you on SR 162. Montezuma Creek (population 507 in 2004; unincorporated) was settled by an ex-communicated Mormon pioneer at the mouth of the same-named creek. Today, the town sits entirely within the Navajo Nation. Continue heading east, through a similar desert-scape. 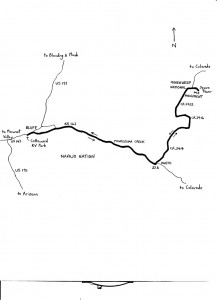 At mile 23.6, just before entering the town of Aneth (population 598 in 2004; unincorporated), turn left onto CR 2414. The road sign may be hard to see; look for a small blue sign near the junction. Also, look for the HOVENWEEP NATIONAL MONUMENT sign. Get used to these signs; from this point, to the turnaround and back, all of the road signs look like these. The terrain becomes more rugged, with the road punctuated by short, steep climbs and descents. Set a steady pace here—avoid attacking the climbs, since it is likely that yet another climb lurks beyond the next (false) crest. Also, watch out for occasional rough sections along the road.

At mile 43.2, stay right to enter Hovenweep National Monument. The visitor center is located just beyond the entrance. From here, it is a short, 1-mile loop that returns to the visitor center for the return route. But—not so fast! Why not stop briefly to experience the Hovenweep mystique? It is a short trail walk from the end of the parking lot (no cycling) to see the Square Tower ruins. These are a must-see. Hovenweep features ancient dwellings that actually predate the arrival of the Navajo ancestry. The Anasazi built numerous masonry structures during the early- to mid-1200s, near the end of their 1,300-year stay in the region. Conjecture is that the Anasazi left during a twenty-five-year drought that began in 1274. The monument preserves six villages left behind by the Anasazi. Many of the ruins remain unexcavated. The Square Tower Group is the largest collection of ruins in the monument. It is thought that as many as 500 persons lived here. A nearby spring provided water, and a dam was built to slow the runoff during storms. The architecture, ingenuity of the layout, and dramatic setting must be witnessed. For the return ride, ride the outbound route in the reverse direction.

Store Your Skis with Care

Cycle Tracks Are Coming to Utah