By Wayne Cottrell, From the Fall/Winter 2011 Issue

The Beaver Dam Mountains Classic is a 66.9-mile, out-and-back ride through mountainous and desert terrain. The ride starts in Santa Clara, ascends the Beaver Dam Mountains in extreme southwestern Utah, and then descends through an increasingly barren landscape, crossing into Arizona before entering the settlement of Beaver Dam. The return route reverses the outbound route. The elevation ranges from 1,880 feet in Beaver Dam, Arizona, to 4,721 feet at the crest of “Utah Hill,” in the Beaver Dam Mountains. The elevation in Beaver Dam, Arizona, is lower than Utah’s lowest elevation, and is the lowest altitude reached by any course in Road Biking Utah. The region is typically dry, hot, and windy, especially during the summer months, so be sure to bring plenty of fluids. Water can be replenished at the Dam Store or Dam Deli at the turnaround; otherwise, be self-sufficient.

The Beaver Dam Mountains are located in the extreme southwest corner of Utah, straddling the border between Utah and Arizona. The mountains are a collection of contrasts, at times jagged and at other times gently sloping; at times populated with trees and scrub and at other times barren. Also, despite the peak elevation of 7,680 feet (West Mountain), the region immediately adjacent the mountains includes Utah’s lowest elevated land. Regarding the trees, a large sector of the mountains is designated as the Joshua Tree Natural Wilderness Area. The Joshua Tree is of the yucca genus, and is found almost exclusively in the Mojave Desert. The name was concocted by Mormons who crossed the Mojave during the nineteenth century; the unusual shape of the tree reminded them of a biblical story in which Joshua reaches his hands up to the sun. The tree is known for its heavy branches, slow growth, and longevity. Animals indigenous to the Beaver Dam Mountains area include bighorn sheep, desert tortoise, raptors, and lizards.

The road curves right at mile 1.8, leaving the historic district. Begin climbing at mile 2.0. The gradient eases at mile 2.8, although the road continues uphill. Note the reddish color of the ground in this area. The imposing mountains on the right are named the Red Mountains. The highway traverses the western edge of Ivins starting around mile 3.9. There is a short descent at mile 4.8, followed by rollers. Enter the Shivwits Paiute Reservation at mile 6.4. The highway crests at mile 7.5, followed by a descent to a crossing of the Santa Clara River. Beyond the crossing, the highway starts to wind and climb. Stay left at the junction at mile 9.3, toward Old Highway 91. You are now following the Old Spanish Trail. Note the red rocks on the surrounding hillsides (“red rocks” is a theme heard and seen repeatedly throughout Utah). The highway continues to roll upward through this landscape; there are several false crests, and the roadway width varies between two and three lanes to accommodate climbing segments. Enter the Beaver Dam Mountains at mile 13.2—from here, the hillsides “close in” on the highway as it winds toward the summit. During my field visit in July 2008, most of the surrounding trees were blackened, as evidence of a recent wildfire. Exit the Shivwits Paiute Reservation at mile 15.2. The trees and desert scrub become denser around mile 16.4, an indicator of the higher elevation. The highway crests at mile 16.9; a long descent begins here. 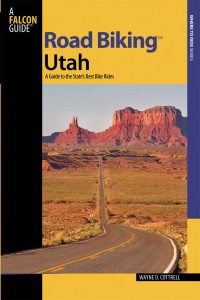 The passage through the Beaver Dam Mountains is along Old Highway 91, a north-south route that formerly stretched from California to Canada. Although portions of the highway currently exist—designated as US 91—most of the older segments have been replaced by I-15. The route through the mountains also follows the Old Spanish Trail, used in the early nineteenth century to connect Santa Fe, New Mexico (which was then part of Mexico), with Los Angeles, California. The route avoided the extremes of the Mojave Desert and established a trade route between the United States and Mexico.

The landscape becomes increasingly barren around mile 19.3. The vista is wide and encompassing. The mountains in the far distance include Bunkerville Ridge and the Black Rock and Virgin ranges. The floor of the Virgin Valley can be seen clearly below; the highway eventually takes you there. Enter the Joshua Trees Wilderness Area around mile 20.7. These protected yucca trees have an unusual shape—nearly all branches, with very little trunk. The trees can survive the harsh desert environment, provided that there is some rainfall and at least one winter freeze. The trees are pollinated entirely by the yucca moth. Enter Arizona at mile 26.2; you are now in Mohave County, on CR 91. The downhill gradient eases at mile 28.4. After a long, straight segment, the highway finally bends right at mile 31.6. Enter the Beaver Dam settlement at mile 32.2. The I-15 freeway is less than 2 miles from here. Beaver Dam, and the immediately adjacent Littlefield settlement, are located about 10 miles from the booming border town of Mesquite, Nevada. Turn around at Old Pioneer Road, just past the bridge over Beaver Dam Wash, adjacent the Dam Store. Note that the Dam Deli and Dam Bar are next door, making this a dam good place to turn around and restock on fluids. (Please consult Road Biking Utah for a description of the return ride, and for further historic details about the route).

The Sufferfest – A Very Dark Place Will Keep You Fit...