The trail starts at the top of Hidden Peak, just below the Tram, and flows downhill through Gad Valley to the Plaza. Along the way, riders will test their brakes and skills. The trail is billed as an Intermediate to Advanced level trail.

“The top Regulator areas – big rollers, bermed out switchbacks, As you get lower, it gets little tighter and a more technical. That when it’s gets rockier tighter switchbacks. There’s some bridging, some rock work, and pretty much everything you could want, this trails got it,” said Blitch. “There are multitudes of rock gardens, there’s one section where you actually ride through a small waterfall. There are caution signs in the areas where you need to pay attention.”

Snowbird is planning a next phase of trail development, with plans for a bike park. The future trails will include some downhill specific trails.

The trail was built with a Sweco and a mini-excavator and tuned by hand. Some sections were completely built by hand. Alpine Trails and Snowbird worked with the Uinta-Wasatch-Cache National Forest to construct the trail in a fashion that was sensitive to viewsheds, watersheds, and natural areas.

I had a chance to ride the trail, and I found that the rating of Intermediate to Advanced was accurate. There are no spots that are really sketchy, or where there isn’t an alternative easier line. And, there are no super steep spots either. The switchbacks can be pretty tight at the top, but they will ride in quite nicely with time.

I took my time getting down, stopping in numerous spots for photos, or to just soak in the mountain views. It’s a trail worth riding. Make a day of it, and enjoy the mountains. The more people that ride it, the better it will become.

We caught up with Michael Martin, a Salt Lake City rider that was trying it out for the first time. “I thought it was awesome! For everything I’ve done, I thought it was top of the line,” said Martin, “the views are amazing.”

Shawn Dobson, another Salt Lake rider, echoed this, “it was a little rocky, but it was awesome! It’s awesome to have a trail like that up here. It’s beautiful up there!”

There are several ways that one can ride the trail. The first is after a lung-busting ascent. One can ride through Peruvian Gulch (on the Widowmaker Hill Climb Course) to the top of the Tram. The descent starts just below and the Tram, and heads in to Gad Valley.

The second human powered option is to ride up the trail. This can only be done if you start early enough to be at the top before 11 am. After 11, the trail is open to downhill riding only.

The third option is to buy a day or summer season pass to ride the Tram to the top of Hidden Peak and then ride the Big Mountain Trail to the bottom. Two or three laps on the new trail will be enough of a workout for most riders. A day pass is $29 and a summer season pass is $125. If you want to bring your out of town friends, demo bikes are available too through Snowbird Sports. 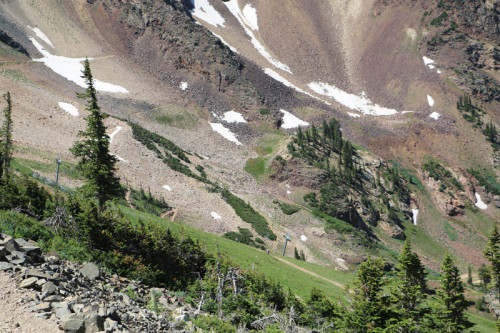 A Chronicle of the Singlespeed World Championships – Scavenger Hunt, Bar...