August 6, 2015 – Soldier Hollow, Midway, Utah – American Eric Young of the Optum presented by Kelly Benefit Strategies surged past the field from a long way back on the uphill sprint finish at Soldier Hollow to win Stage 4 presented by Subaru at the Larry H. Miller Tour of Utah. Young covered the 127-mile course, held for the first time at Soldier Hollow in Heber Valley, in four hours and 47 minutes. Young came around with 300 meters to go and held it to the line to win by 4 bike lengths in an awesome display of power.

“It feels great,”said Young, who won a sprint finish at Stage 5 in last year’s Tour of Utah. “My best chances were stages 1 and 2. I was really happy to see Kiel (Reijnen) win Stage 1, but I felt really good that day so I was disappointed. To come back, to recover and be able to take this one is unexpected, but also I'm proud of that.”

The group stayed away through the undulating terrain in Duchesne County and onto the second KOM climb up the Category 2 Wolf Creek Pass. After cresting the 9,495-foot summit, the racers hit blistering speeds of 60 miles per hour on the descent back toward the Heber Valley and the finish at Soldier Hollow. After spending 112 miles in the front, the breakaway was caught in the Swiss-style community of Midway with three kilometers to go.

Axeon’s Daniel, who bridged to the break on Wolf Creek Pass, captured the Utah Office of Tourism King of the Mountain jersey. Carpenter was awarded the Vivint Most Aggressive Rider jersey. Fans selected Ted King as the America First Credit Union Fan Favorite in the Best Domestique category.

Utah’s Rob Squire finished a solid ninth on the day. He moved up to 18th place in the General Classification at 14 seconds back. Tanner Putt finished in 100th place at 5:34, he’s now in 102nd overall at 27:34 back. Erik Slack finished in 87th at 2:22 back and is now in 83rd overall at 17:03 back. Chris Putt did not start the stage, presumably a result of his crash yesterday. 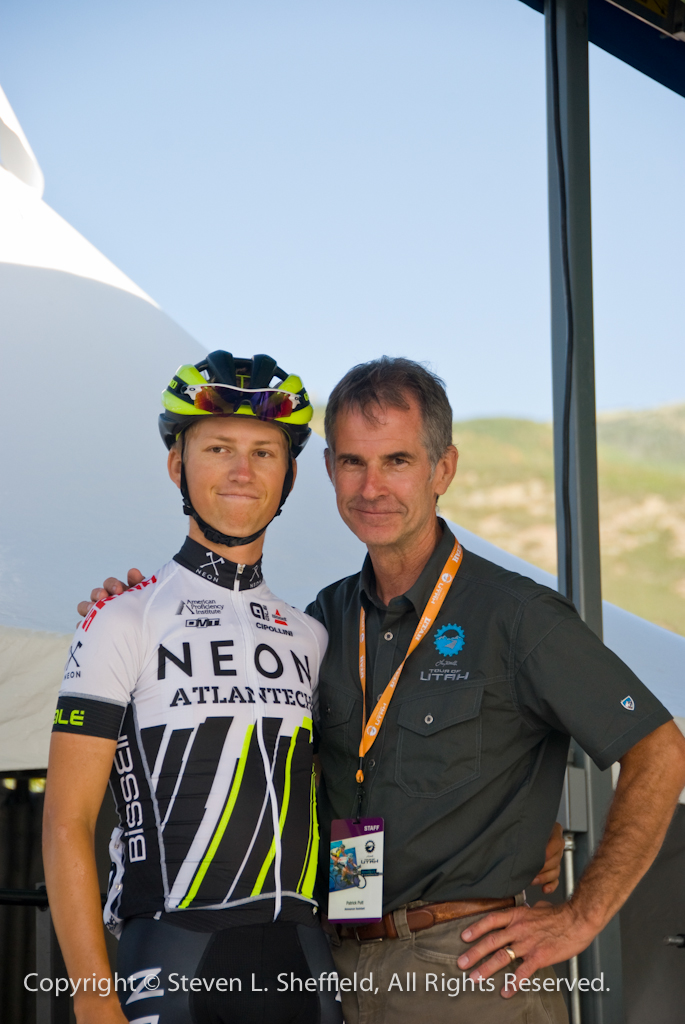 Chris Putt and father Patrick Putt at the start of stage 4 of the 2015 Tour of Utah. Putt did not start the day's race, presumbably due to a crash yesterday. Photo by Steven Sheffield

Stage 5 presented by Utah Sports Commission revives the popular Salt Lake City downtown circuit, which was last held in 2013. The 55-mile stage will start at 4:40 p.m. on Friday, Aug. 7, challenging the peloton to seven laps of a fast and technical eight-mile circuit. Starting on the north side of the Utah State Capital, the race will pass City Creek Canyon, the Avenues neighborhood and the University of Utah. In addition to the steep climb up State Street, the peloton will encounter a 20-percent gradient up Wall Street and Zane Avenue to the hilltop finish at the Utah State Capitol. It could be the hardest 55 miles of the week at “America’s Toughest Stage Race.”

General Classification after Stage 4 of the 2015 Tour of Utah