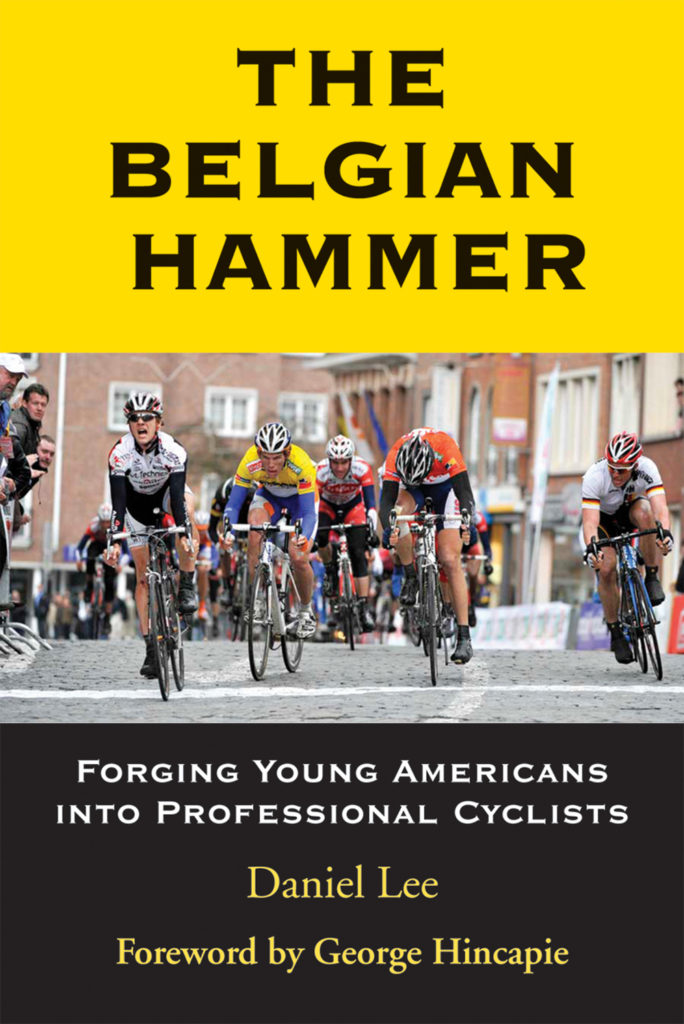 The subtitle of the book, Forging Young Americans into Professional Cyclists, sums up the gist of the book. Young cyclists from 19-21 years of age, perhaps older, go to Belgium to seek their potential to become a professional cyclist. The test of their potential lies in the ability to do well in the infamous kermesse (or kermis) races of Belgium. There may be 150 or more riders in these weekly (or more frequent) events, with each rider putting down “the hammer” from the start of the 100-kilometer race. The hammer never lets up as the riders fight for position throughout the race on narrow roads, some with cobblestones, along with sharp turns and short steep hills. And then there are the racing conditions: “The race started off in chilly dry conditions but quickly deteriorated to a cold wet slog”. If you are not in the top 50 you are going nowhere in your career potential.

The book is older with a copyright date of 2011, but by simply changing the names of the young riders featured in the book (Phinney, King, Craddock) and it becomes relevant to 2019. The Belgian Hammer is a hard look at what it takes to be at the top of European cycling. Not only is the racing described but the whole culture of living in Europe is detailed, food, lodging, and the towns in which the riders live. In addition, there are the costs of time such as a leave of absence from college and money, almost $1400 for room, board and racing. It’s no wonder that only a select few move on.

Former local pros, Jeff Louder and Levi Leipheimer have one-sentence mentions in the book. Former CEO of USA Cycling and Salt Laker Steve Johnson also has a brief interview section in the book. Bicycle racing fans that have followed the sport will recognize many of the names and races discussed in the book. You will also be treated to many behind-the-scenes interviews that Mr. Lee was able to obtain from his personal connections to many of the riders. The Belgian Hammer gives you a rare and memorable look into the lives of those hoping to make it to the top of the profession cycling ranks.

As interesting as the book was to read, listening to Jeff Louder discuss his time in Belgium was even more entertaining. Jeff is the owner of TrainLouder.com, a personal training business for anyone that wants to improve their cycling skills from up and coming Junior racers to the weekend recreational rider. Jeff is also the Manager (Director Sportif) for the Hagens/Berman Axeon professional cycling team. I wish to thank Jeff for his time.

Cycling West: Tell the readers about your start in Belgium.

Jeff Louder: My father, Ken, found an advertisement for a room in the bottom floor of a house in Belgium during an Internet search, so off I went. The book says I was a graduate of the Cycling Center but at that time it was less formal, just a room in a basement. I was about 20 and passionate to become a cycling pro. The living conditions were OK but after a year I moved in with the DeWulf family. They understood my needs as they had a relative that almost entered the pro ranks. I stayed there about 5 years. The Dewulf’s were a large reason for my success. Greta did a lot for me. I learned Flemish along with her 3 year-old daughter, Zoe.

During my first year I lived with a bunch of other Americans that were doing the same thing as me. My roommates and I would ride our bikes to all of the races, some of which were quite far. Occasionally we took the train. We sometimes rode home in the dark, or would catch a train home. We missed a few races because of transit delays. It was crazy when I think back about it. With the DeWulf’s I had transportation to the races. They also helped me join a team, which allowed me to enter bigger races.

C.U.: Your start in Belgium racing was not at all auspicious. When did you realize you were going to make the pros?

J.L.: The first year I mostly learned the hard way. In my first race I crashed, broke my bike, my helmet and cut my cheek where I still have a scar. I was taken to a hospital by ambulance two cities from the race and dropped off. My race bag and wallet was still at the start/finish area of the race. Not my expected experience. I did obtain a ride back from a Belgium rider that also crashed and was brought to the same hospital so there was a little good news. The rest of the season went better but I made a lot of mistakes and feel like I went home with my tail between my legs.

I didn’t lose my desire to succeed and once I got back to Utah and recovered a little I began preparing to go back for another year. That second year I had a lot of top-10 finishes and had several wins in the Belgium races. If you made the “cut” and had your name in the newspaper as one of the top finishers the local people noticed. I had my name in the paper and heard my name mentioned quite a bit by the local citizens. I didn’t expect to get onto a pro team after that second season but I think I got lucky. I won the right race at the right time, and had a meeting with Gerard Buelens the manager of Tonnissteiner-Colnago the next day. He offered me a contract.

C.U.: As the book points out, you were one of a small group that made the leap to a pro contract. What set you apart from the other riders that may have had near equal talent?

J.L.: I did have talent, but not amazing talent. I put in a lot of hard work along with a strong desire to make it. I feel like mentally, I just had to do it so I persevered and made the cut. A lot of riders were doing the same but I managed to become a pro. I also think I was lucky as a lot of things in my favor also fell into place.

C.U.: Jeff, thank you for your time. I had a good time listening to your stories. Good luck with the Hagens/Berman Axeon team. If anyone wishes to improve his or her cycling experience you can contact Jeff at [email protected]

See also our Conversation About Life as a Euro Pro with Jeff Louder (cyclingutah.com/racing/road-racing/a-conversation-about-life-as-a-euro-pro-with-jeff-louder/)

Why the 2021 Red Bull Rampage is Super Bowl of Competition...