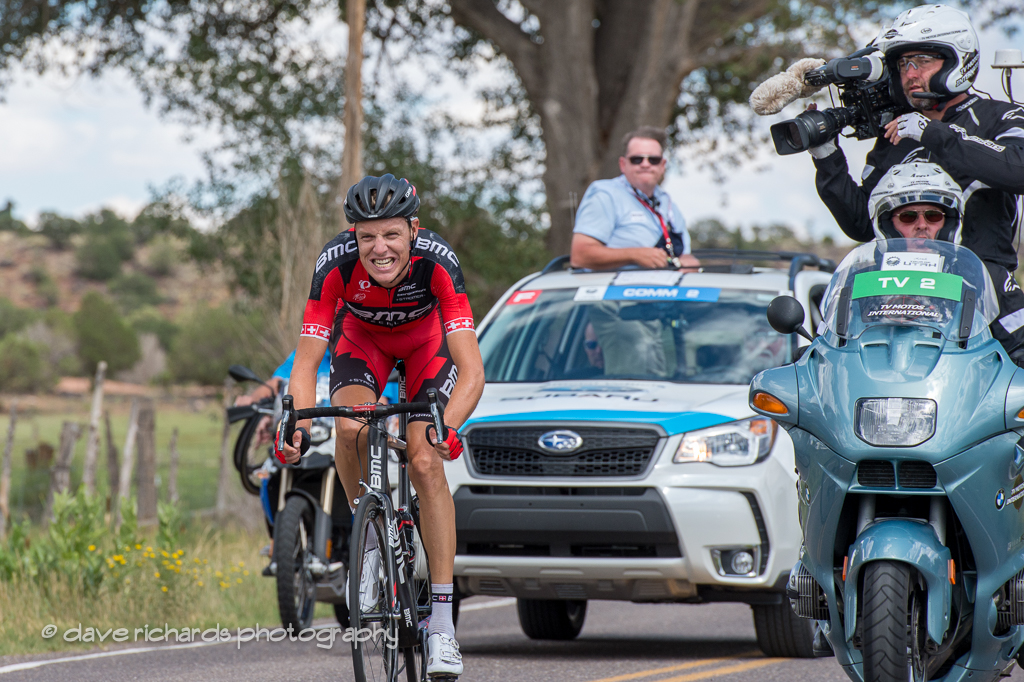 August 5, 2014 – TORREY, Utah – BMC Racing Team’s Michael Schär of Switzerland survived in the original breakaway of Stage 2 presented by iON Camera to win the second stage of the Larry H. Miller Tour of Utah.  Covering the 130.7-mile course from Panguitch to Torrey in five hours and three minutes, Schär held off both leg cramps and a furious chase group of 34 riders to win the stage.

“It was a really tough day for me today. I had a good climb and I had good legs, and normally I do better the higher we go,” said Schär, who finished 7th on General Classification at the 2013 Tour of Utah, called today’s Stage 2 presented by iON Camera the hardest of his career. “All of a sudden I had (leg) cramps…I had the worst cramps in my life and in the end I could hardly pedal. Moments like that it’s more what’s in the mind than in the body.”

For a second day in a row, Kocjan finished on the second step of the podium, but secured the G.C. lead and pulled on the Utah Sports Commission Sprint jersey.

“When it came to the sprint, I knew I was one of the fastest guys, so I liked my chance,” Kocjan said. “It’s not going to be easy. We’ll try tomorrow to defend the yellow jersey.”

The 121-rider peloton faced blue skies and crosswinds as it rolled out of rural Panguitch and passed the national landmarks of Bryce Canyon National Park, Grand Staircase-Escalante National Monument and Capitol Reef National Park. The unrelenting course challenged riders with 10,162 feet of elevation gain punctuated by a rugged Cat 3 climb to the Hogsback Summit outside Escalante. Utah’s trademark red rock canyons gave way to thick growth of aspen, pine and pinion juniper trees as the field ventured into the Dixie National Forest before the finish in Torrey.

Park City's Tanner Putt had another strong sprint, finishing seventh and with the main bunch, and jumped into the Best Young Rider jersey and stands just 12 seconds back overall and stands in fifth place.

“It was really big. I knew it was a good stage for me and I could possibly take the stage,” Putt said. “My family was all here and even some friends came down to watch me. To do it in front of all of them was really cool.”

Putt said he plans on doing everything he can to hold onto the jersey for another day before the race turns uphill for the final four brutal stages.

“We have some really good climbers on the team,” Putt said. “If I can’t hold onto it, hopefully we can keep it in the team.”

Utah's Robbie Squire (Jamis-Hagens Berman) stands 30th overall just 17 seconds back after a strong ride in Stage 2 kept him with the peloton and helped chase down the break.

Veteran pro Jeff Louder, UHC, didn't fare quite as well as he finished 13:21 off the pace of the winner.

Chris Putt, younger brother team teammate of Tanner, was also off the back having served as a valuable domestique early in the race.

Stage 3 presented by the Utah Sports Commission will begin at 10:55 a.m. (MT) on Wednesday, August 6. The Tour of Utah returns to its roots in Utah County where the first edition started 10 years ago. After a start at the headquarters of IM Flash Technologies in Lehi, the course turns south to follow the shores of Utah Lake. This 118.3-mile stage winds into the East Tintic Mountains for the day’s only Ski Utah King of the Mountain climb in Eureka, a mining “ghost town.” The pro peloton will finish with three circuits on the world-famous race track at Miller Motorsports Park in Tooele, which last hosted the Tour of Utah in 2012 for a team time trial. The race is expected to finish between 3:30-4 p.m.

It will be a full day at Miller Motorsports Park, with two other cycling events at the complex, the inaugural Tour of Utah Women’s Edition taking place from 1-2:30 p.m. and the Chase Pinkham Memorial Criterium taking place from 5-8:30 p.m.

Pedaling Through Stone Town, Zanzibar – The Bicycle Art of Hadley...