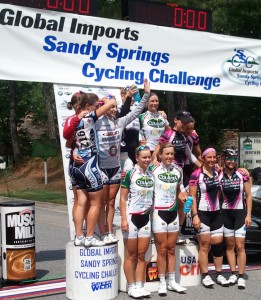 The team had divided its members to compete in New Mexico’s Tour of the Gila, the Joe Martin Stage Race in Arkansas and the seven-event Speed Week in the Carolinas and Georgia.

“It’s been an exhausting and incredible week for our young team,” said Team Director Susannah Gordon. “Nicky rode as strong as I’ve ever seen her at Speed Week and Emily really dug deep for a huge win on Sunday in the crit.”

Wangsgard never finished outside the top 10 during the nine-day race series, landing on the podium in third place in each of the final two events. Liza Rachetto took 10th overall with a top-10 stage result and Tiffany Pezzulo finished in 12th place overall with a trio of top-10 stage finishes.

“This week we continued to come together as a team and had strong performances from everyone,” Wangsgard said. “Speed Week is such a tough event because not only are you riding almost every day, there’s a lot of travel as well. I couldn’t be any happier with the result.”

Meanwhile, following a second place overall team result at last week’s Tour of the Gila, the other half of the Primal/MapMyRIDE team traveled to Northwest Arkansas for the four-day Joe Martin Stage Race.

But the weekend’s best result found Kachorek atop the podium after the final criterium following a brutal race that saw constant attacking despite high temperatures. Kachorek also finished in eighth place in Friday’s road race and finished ninth overall.

The eight-member Primal/MapMyRIDE Pro Women’s Racing powered by BH Bikes team was formed in 2010 to support professional women’s cycling and create an avenue for better feedback on the development of women’s specific technologies.