Nine cities across the United States have been selected to play host to America’s national criterium series, USA CRITS. The pandemic pushed several events back including the pre-season Birmingham Hammerfest Fueled by BOLT24 which will join for 2021 as a regular season points race. Other events, including Sun City Crit in El Paso and Athens Orthopedic Clinic Twilight Criterium in Athens, have also departed from traditional dates in what will provide a recovery window from the pandemic. Spartanburg Regional Healthcare System Criterium is prepared with a date the Friday before Athens should there be a need to move that event on the calendar as well.

There will be expanded races surrounding the Series in a number of venues including a second day added to the Salt Lake Criterium in Utah. The ASWD Twilight Criterium in Boise will simultaneously be hosting Para-cycling Road National Championships and the Chrono Kristen Armstrong TT alongside their downtown criterium shadowing the Capitol.

Discussions are in progress about adding a second day of local racing to the Audi Denver Littleton Twilight Criterium, America’s largest criterium event. Saint Francis Tulsa Tough will once again be in the Series comprising three days of crits and fondos with #D1 Teams racing for Series points on the Blue Dome course Friday.

2021 will see 19 days of live streaming free to viewers. “We want the world to see our #D1 teams race and expand promotion of the venues and partners helping grow the sport. This represents a $250k investment made possible by our partners and comprises nearly 80% of all road events streamed in America. We have been in discussions with a couple of international media partners. This year is the bridge to pulling those agreements together,” said Scott Morris, Managing Director.

The Winston-Salem Cycling Classic, previously announcing a move to the fall, will have an exciting new format with three days of criterium racing. Friday will play host to the USA CRITS Finals with the season jerseys and #D1 HelloFresh Team Competitions on the line. Winston-Salem continues their investment in the sport by also hosting the International Crit Challenge on Saturday. Select international teams from around the world will be invited to join in racing against America’s best.

“We can’t say enough about how our venues expanding their events, teams staying together despite not racing, and sponsors sticking with us during these challenging times has helped motivate our efforts. It hasn’t been easy at any level, but we know the teams are ready to race and the venues are looking forward to #theshow returning,” added Morris.

USA CRITS will continue to monitor the impacts of the pandemic and make changes that are in the health and safety interest of the athletes and communities.

Twenty-two #D1 teams have so far committed to compete in the Series and will be announced later in January 2021. Confirmed to be returning are both of last year’s team winners, ButcherBox Cycling (men) and Colavita HelloFresh Pro Women’s Cycling Team (women). 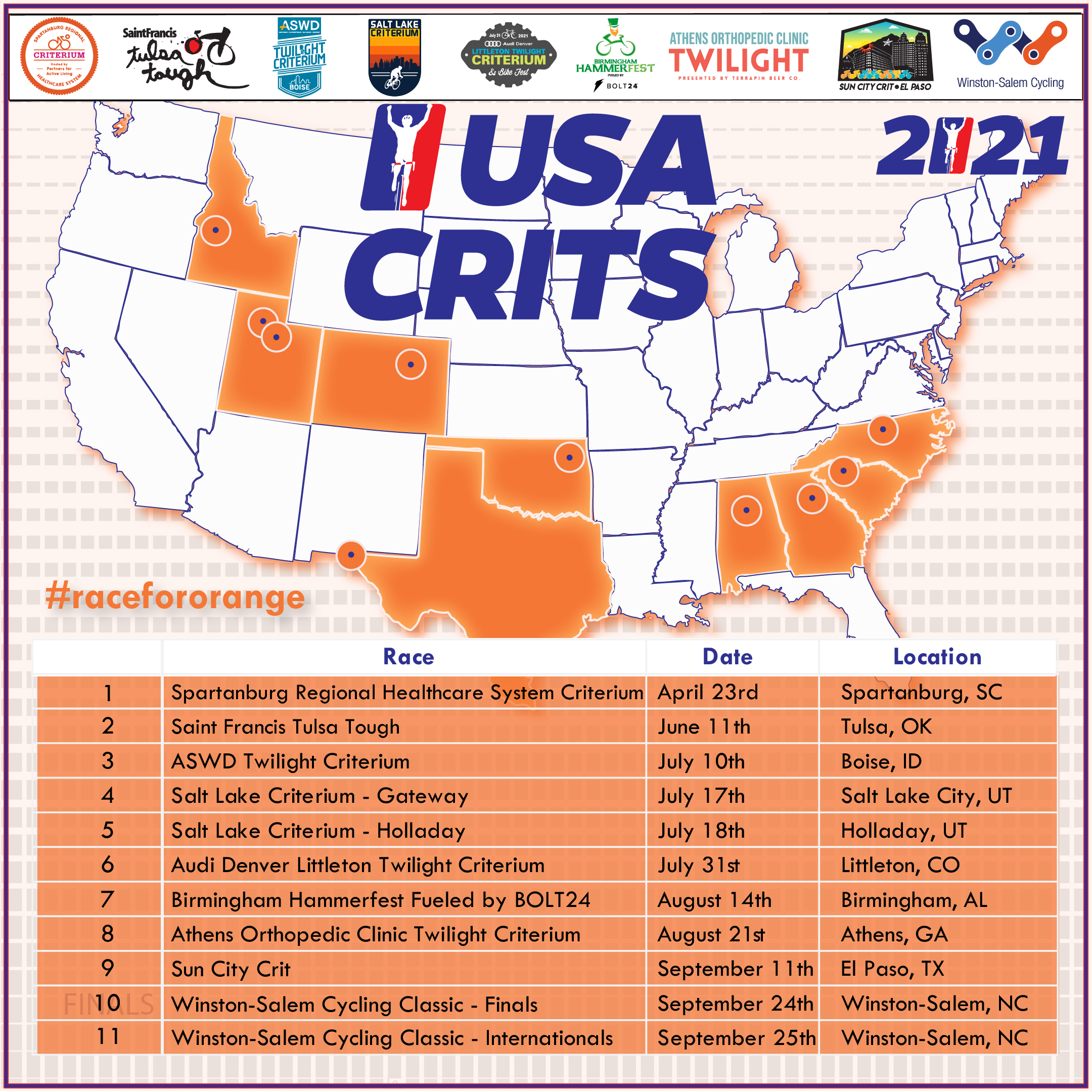 On The Starting Line: Your First Road Bike Race

Archambault and Kaufmann Deliver in Hell; Utah’s “Hell of the North”...