By Bill Roland – Many avid cyclists throughout the readership of Cycling West may feel quite confident that having watched The Tour de France throughout July and perhaps other European Grand Tour events, they have a firm grasp on all the intricacies of the 2.HC events of the UCI Europe Tour. Not so fast my friends! May I introduce you to Carlton Kirby, employed by Eurosport and considered to be the legendary Tour de France radio voice commentating on the world’s biggest cycling races. Carlton has covered the Tour de France, the Giro d’Italia and Vuelta a España among many other cycling events. In this book, you will find out very early on that Carlton Kirby is far from your “just give me the facts” commentator. 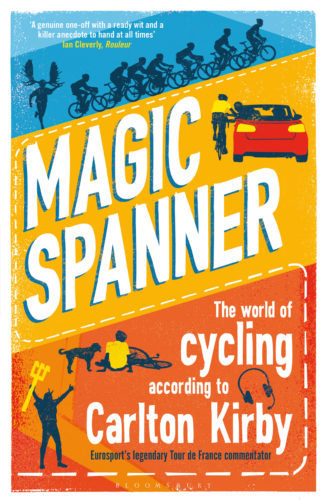 After a quarter of a century, Carlton has accumulated legions of loyal fans who are drawn to his off the cuff wit, his excitable style, and his insider’s view to tell the radio listeners what is really going on and why. Along with Carlton in the commentary booth is Sean Kelly, referred to as “The King,” a nickname rightfully earned after seven times the consecutive winner of the Paris-Nice classic. Together they report every aspect of bicycle racing and exactly what is taking place in the current stage and in the minds of not only the team managers but the cyclists themselves. Carlton has established a reputation among the competitors and the fans that he possesses no fear to share with the listeners exactly what he saw take place. It might be an outstanding descent performed by an extremely brave rider taking tight corners at an atrocious speed or a sprint finish when an unabashed rider reaches wattage power that completely destroys a group of favorites over the final 200 meters.

Throughout much of the book, written by Carlton along with Robbie Broughton, the co-founder and managing editor of Ride Velo, the story is presented in a diary format throughout the 2018 Tour de France. In 2016, Robbie asked the managers of Eurosport if he could do an interview with Carlton for his @ridevelo site. A 20-minute appointment turned into a thoroughly enjoyable two hour conversation and Carlton admitted that Robbie hardly got a word in. Robbie asked if he’d ever thought of writing a book and Carlton said his life got very busy. A series of recorded chats were planned and scheduled into the season between races. Robbie collected Carlton’s thoughts into a series of chapters and by the end of the 2018 Tour de France, ‘Voila’ a book was in the making.

Perhaps the most intriguing aspect of Magic Spanner is the combined authors' ability to share with the readers a great deal of interesting behind the scenes Tour racing happenings and events that never seem to to be recorded on the screen or leaked out via the news media. As an Englishman, it didn’t take Carlton very many pages before he highlighted the Five Lions of British cycling. In no particular order, he went into detail about the personalities and riding characteristics of Mark Cavendish, Bradley Wiggins, Chris Frome, Geraint Thomas, and Simon Yates. For each rider, several pages were dedicated to the intricacies of their riding style along with their personalities and how they communicated with the reporters. Carlton succinctly described approaching a rider for an interview. “Getting a good interview from a rider,” he explained, “after he’s just completed a grueling time trial, or spent four hours hacking up a series of mountains, is not easy. It takes a bit of finessing — not easy in a competitive environment. The finish line reporter has rivals in the hunt for the first reaction. Getting a handle on those around you as well as the target interviewee is difficult.”

Life on the road for a radio broadcaster, or for that matter, all working press members, is not peaches and cream, excellent vintage port wines, or masterfully decorated hotel rooms.Carlton described many transfer trips from the finishing line of one stage to the press center of the next. First of all, we must account for the thousands of staff members who bring the cycling excitement to our television screens. There are the race organizers, the police, the national sports bodies and sanctioning authorities along with the negotiation crew and the booking staff. Keep in mind, all of these workers are traveling simultaneously to the site of the next stage and Europe does not have a ribbon of interstate highways to transport thousands of people along with the barriers, cables, rigging, guidebooks — and much more. Carlton reminded the readers that the TV crew includes cars, tickets, passes, cameras, graphics, planners, producers, directors, lightening, sound, make up crews, and much more. When you factor in each racing team and all of their equipment including cars, buses, bicycle mechanics and their gear, it’s more like a traveling circus than we might have imagined. Oh, and let’s not forget the team chefs and catering staff members who have the responsibility of providing each contestant at least 6,000 calories a day to cope with the physical torment of a regular racing day. All of us are familiar with the bonkers or running out of fuel. Feeding these cyclists is extremely important and the timing of it is vital.

One of the most interesting and respected people that Carlton describes in the book is Patrice Diallo, a camera motorcyclist. “The guy is a genius,” Carlton writes. “Patrice can’t dance. But a motorcycle, in his hands, does. The finesse displayed by Patrice and his machine is simply remarkable. His ability to control his bike, while accounting for the added load and imbalance of a cameraman with all his kit, is remarkable. The platform he provides for generating pictures is as stable as they come, even on a highly technical, mixed surface descent. Every cameraman wants to work with Patrice. He is so experienced he knows when and where to go, how to get there and how to get out. It’s almost as if the cameraman just has to press the button because Patrice, with the lines he is taking, has the shot set up for him.”

Needless to say, this review is an extremely brief account of Magic Spanner. Which brings a question to mind: What is a Magic Spanner? That’s easy, just read the book and Carlton Kirby will tell you all about it!

Magic Spanner: The World of Cycling According to Carlton Kirby, by Carlton Kirby and Robbie Broughton (Bloomsbury Sport, 2019). ISBN: 9781472959867

5 Things to Consider When Buying Your First Real Mountain Bike

A Review of South Pole Epic by Daniel Burton

Bike Touring Survival Guide is Highly Recommended for Anyone Planning a...