It’s the 16th career XTERRA World Tour win for Osborne, the seventh for Kingsford, and the third victory of 2021 for both.  The couple from New Zealand also shared the top step in April at their home country race, XTERRA Rotorua, and XTERRA Oak Mountain in Alabama in May.

XTERRA Beaver Creek, aka “The Beast” boasts the highest elevation of any major on the XTERRA World Tour. It combines a one-mile swim in the 67-degree waters of Nottingham Lake located at 7,400-feet elevation; with a 15-mile mountain bike that climbed 3,500-feet into the thin air of the Rockies topping out at 9,400-feet; and finished with a grueling six-mile trail run featuring another 1,000+ feet of climbing through the aspens.

In the men’s race the star-studded elite field put on an amazing display of endurance and grit. Eric Lagerstrom blitzed the swim in 18:12, coming out of the water nearly a full minute ahead of Branden Rakita, Osborne, Timothy Winslow, Elliot Bach, and Brad Zoller.  Sam Long and Josiah Middaugh were two minutes back from Lagerstrom, and roughly one-minute 20 seconds behind Osborne.

Osborne pulled away from the group then charged past Lagerstrom in the first couple miles of the bike to take the lead.  Long and Middaugh did the same and chased Osborne up the mountain together in second and third place.  From there, the race boiled down to a three-man sprint to the top of the climb as each racer said getting to the top first was the key to success.

Osborne won the battle, with Long about 10 meters back, and Middaugh further behind in third.

“Long almost got across at the top but he never made contact,” said Osborne.  “I knew if I could get to the top first they wouldn’t be able to follow my line on the downhills, and that’s how I’d get away.”

Get away he did, but he couldn’t stay away because Long and Middaugh were pushing the envelope behind him.

“Long and I battled on the bike, he was climbing really strong,” said Middaugh, noting how Long led the charge up the mountain but he was able to pull away on the descents.

“Once the downhills hit, this is my home course, I know these trails, so I was able to leapfrog from Sam Long to Sam Osborne by the end of the bike and find the front of the race.”

With the late surge on the bike it appeared Middaugh had the upper hand heading out onto the run but that’s not how it played out.  It was more like a battle of attrition.

“I felt terrible at the start of the run, and I was convinced Josiah was going to come across but after the first kilometer I still couldn’t see him, so I told myself I just needed to suffer to the top and then roll myself off the mountain and see what happens,” said Osborne.

Middaugh wasn’t feeling good either, saying he had double cramps in his stomach the first couple miles and couldn’t stride out.  That led to Long, who was about 50-seconds back at T2, catching up about one-mile into it.

“I caught Josiah right at the top of Aspen Glade, ran behind him for three or four minutes then made a move,” said Long.  “I got past Josiah and got a glimpse of Osborne on the second loop and left it all out there but couldn’t catch him. Still, it was rad.”

Osborne got the win, Long posted the fastest run split of the day and finished second 32-seconds later in second place, and Middaugh finished third one-minute after that.

“To perform at this altitude, I’m so stoked, I didn’t think I could actually do it,” said Osborne, who spent two weeks training at similar elevation in Winter Park leading into the race and said that was a game changer.  “If you have any chance to take on Josiah on his home turf, you have to climatize up here, otherwise you just can’t compete with the guy.”

Long was equally thrilled to mix it up with XTERRA’s best.

“I had the fitness, but lacked the finesse on the mountain bike. I have to ride trails more,” said Long. “I mean, how do you compete with Josiah who designed the course, and Osborne who is one of the top three technical riders in the whole sport.”

Middaugh, who won this race seven times before, was happy with the race he put together.

“This is what I knew I could do, but you can’t control what your competition can do,” he said. “Kudos to those guys. They did great and it was a really good race.”

In the women’s elite race Kingsford led from wire-to-wire with the fastest swim and run times, and the second-best bike split behind only Suzie Snyder.

“Definitely a redemption race after the disaster I had here in 2019,” said Kingsford. “Coming out two weeks before helped us, but it didn’t make it any easier.  I think the key was pacing.  I paced myself on the swim, rode my own race on the bike because you can come undone so quickly up here, and then the run was just brutal.”

Snyder, who won this race in 2019, was hoping that a summer spent in Colorado riding around these trails would help make things easier come race day.

“It didn’t,” she laughed. “I thought training up here would make it not hurt as bad, but it was worse! My breathing was terrible, and I don’t know if I didn’t start as slow as I should have or what.  It’s just so hard.” 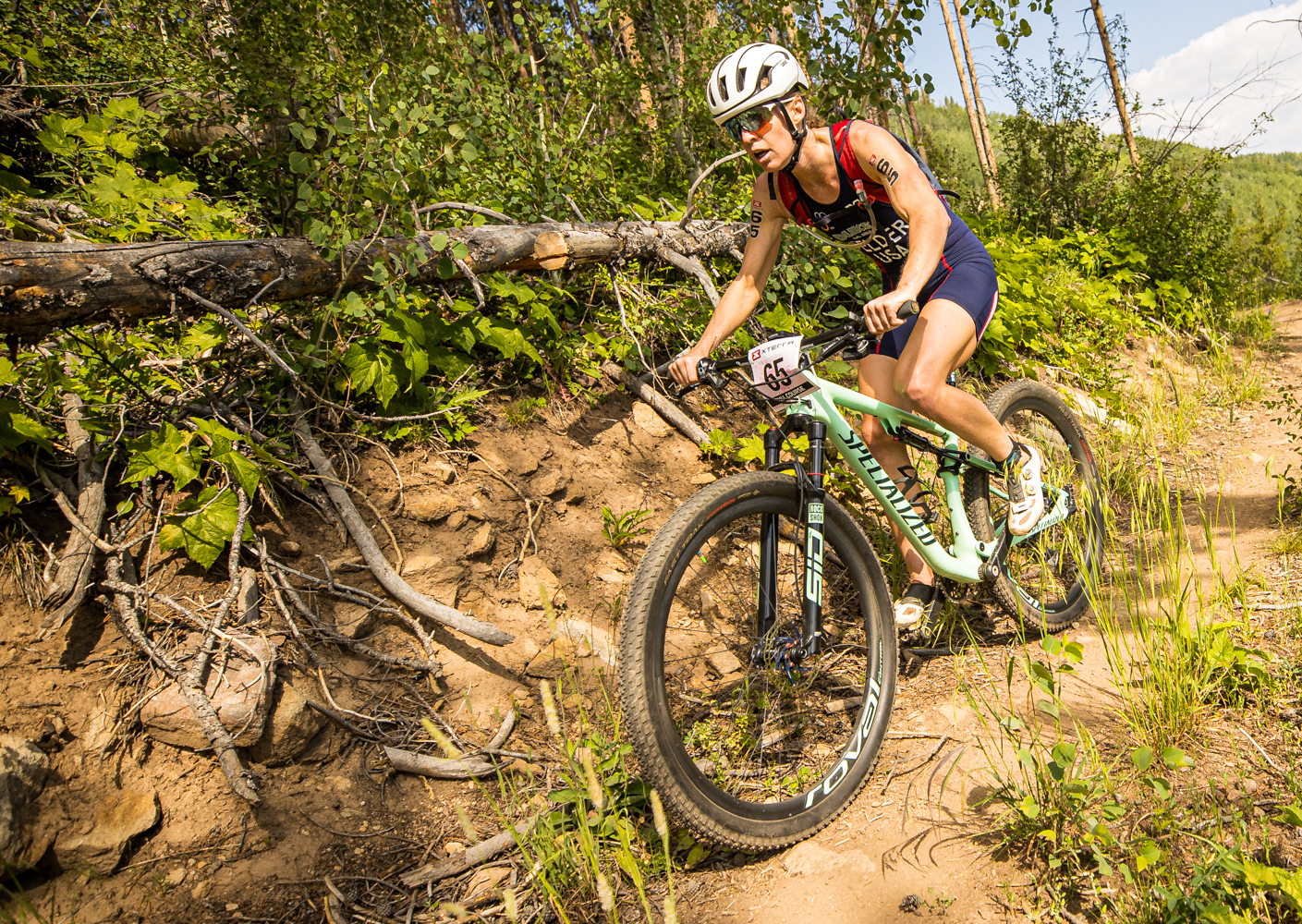 Amanda Felder was second out of the water and held the lead until Snyder caught her at the top of the first climb about mile four.  From there Snyder pulled away and finished second (with the same time finish time she posted two years ago) and Felder was steady to round out the top three.

“I felt good out of the water but couldn’t get in a rhythm on the bike, it just felt really labored.  Suzie rode by and wasn’t even breathing hard, which was super impressive,” said Felder.

An amazing collection of amateur women filled out the next four overall spots with Cathy Yndestad in 4th, Deanna McCurdy in 5th, Irena Ossola in 6th, and Genevieve Evans in 7th.  Nicole Valentine and Rebecca Zitnay placed 4th, 5th in the elite ranks. 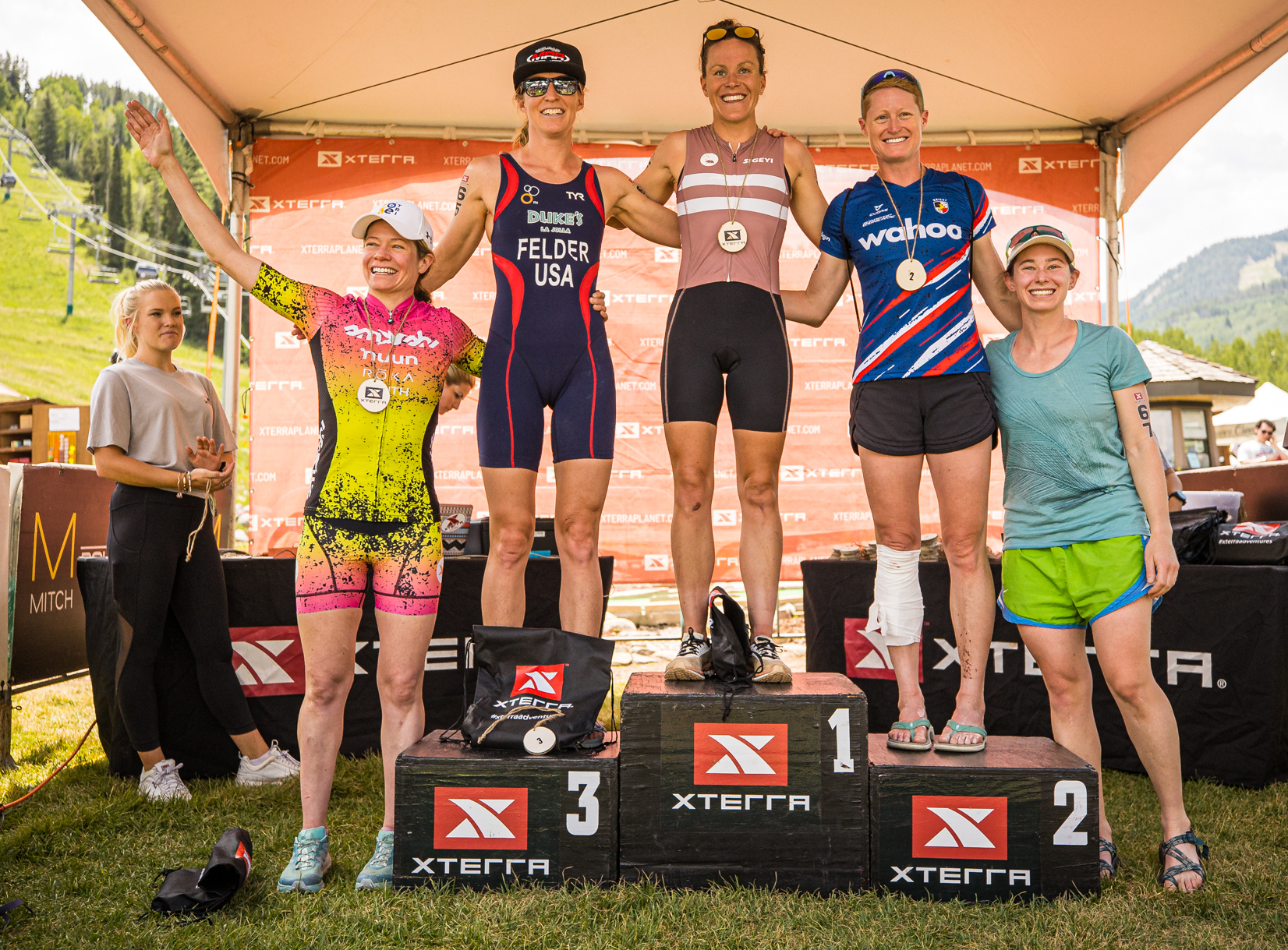 Colin Szuch from Evergreen, Colorado and Cathy Yndestad from Mesa, Arizona captured the overall amateur titles at XTERRA Beaver Creek. We’ll have a recap on the age group races and the complete list of Maui qualifiers posted in the coming days.

All Photos by Jesse Peters / XTERRA

DinoTri Carves Its Own Niche

Pellman and Maaranen Win the 2016 DinoTri in Vernal, Utah on...