The Union Cycliste Internationale (UCI) and Warner Bros. Discovery (WBD) have unveiled the new calendar for the 2023 UCI Mountain Bike World Cup and Enduro World Series. The plan unifies all major mountain bike formats under one combined calendar for the first time and will take riders to ten countries across three continents.

As mountain bike enters a new era, riders and fans can look forward to cross-country Olympic, cross-country short track, downhill and enduro, aligning for the first time in the history of the sport. Further details around E-mountain bike enduro and cross-country marathon will be released in September 2022. The new-look calendar will see some mountain bike formats sit alongside one another for the first time, racing grouped by location to maximise sustainability and brand new venues making their global debut, while valued sites keep their place in the calendar.

The reinvigorated calendar was developed by the UCI in partnership with ESO Sports and Discovery Sports Events, two of WBD’s specialist sport organisations.

With 15 rounds covering 34 races organised across the world, the 2023 combined calendar for the UCI Mountain Bike World Cup and Enduro World Series will see action taking place in ten countries across three continents. Cross-country Olympic and cross-country short track each have nine rounds in total, while downhill and enduro each have eight. As well as brand new locations brought into the fold, established venues will welcome new formats onto their trails.

The new structure will reflect the growth of the sport, allowing each of mountain bike’s different formats to flourish, reach new audiences and enhance the experience for fans both on site and watching from home. ESO Sports, the owner and operator of the Enduro World Series (EWS) and in whom WBD recently invested, will drive the project to globally unify mountain bike and elevate it to new levels, in collaboration with the UCI. Discovery Sports Events, the global promoter and event management leader, is extending its relationship with the UCI to help promote the sport in support of further growing its global audience.

“With the integration of enduro, and soon also of cross-country marathon and E-mountain bike enduro to the events of the calendar, which already includes cross-country Olympic, cross-country short track and downhill, the events will take on a new dimension, bringing together even more athletes and fans.

“We also look forward to introducing new hosts for some rounds while welcoming back traditional venues that have been greatly appreciated over the years. The partnership between the UCI and Warner Bros. Discovery will significantly increase the international exposure for mountain bike, allowing the sport to continue to grow globally.”

Chris Ball, CEO of ESO Sports, said: “For the first time all major mountain bike formats align on one calendar, giving teams, athletes and fans new opportunities to experience their favourite racing with no date clashes.

“We’ve done our best to group venues in close geographical proximity to reduce the season’s travel footprint and increase efficiencies for everyone on the tour. We’ll be hosting new event schedules combining formats that have never been combined before, giving riders a unique new experience and using the very best of the terrain available at each location to provide the best racing on the planet, while of course valued race tracks remain in the calendar.

“Calendar classics sprinkled with some new venues – 2023 is going to be an incredibly exciting first step towards our long term plans for mountain bike racing worldwide.” 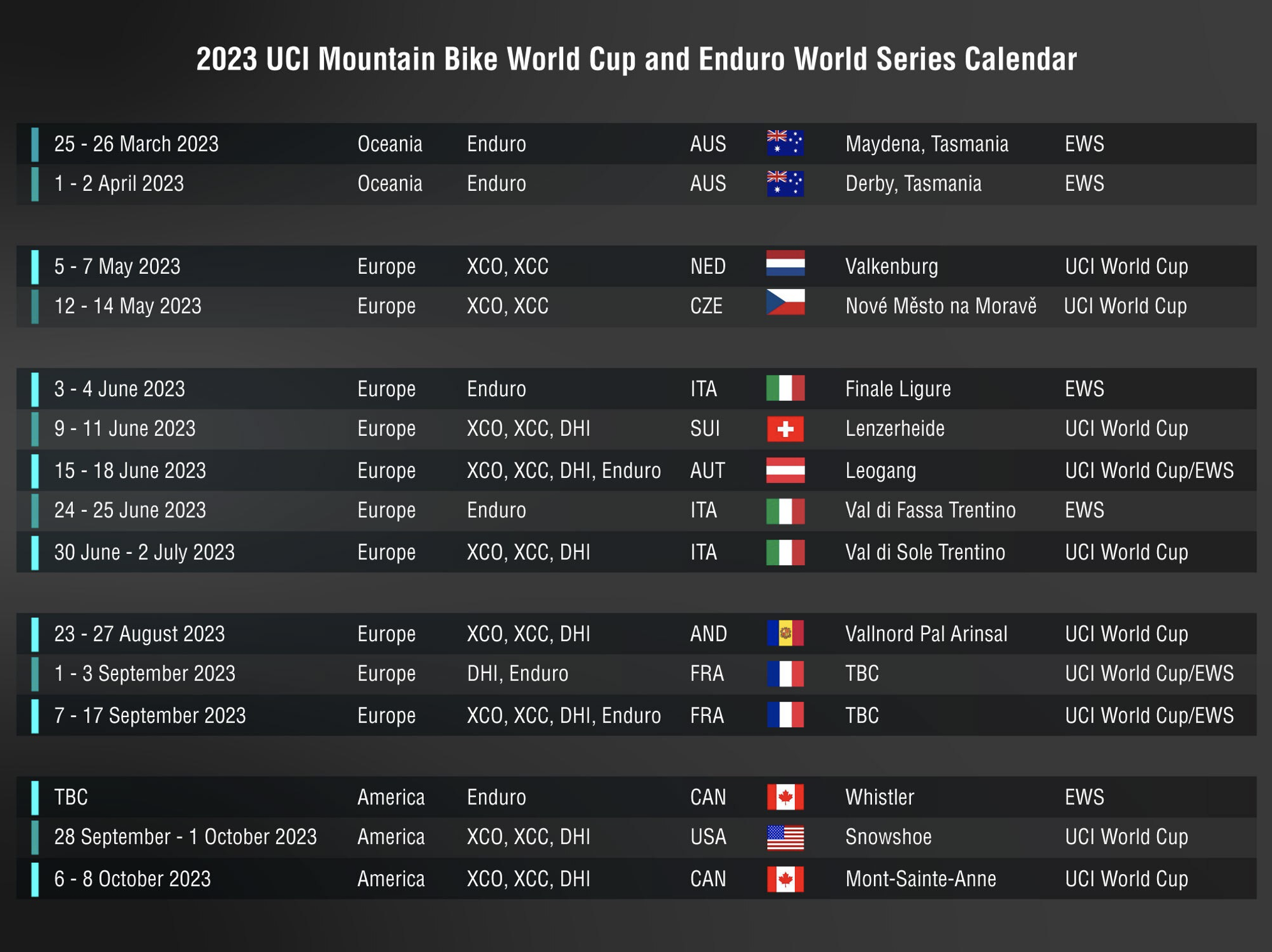 Racing gets underway in March with an enduro double-header in Tasmania, Australia, first in new venue Maydena, followed by Derby.

Limburg-Valkenburg in the Netherlands makes its UCI Mountain Bike World Cup debut when it kicks off the cross-country season, with classic venue Nové Město na Moravě in the Czech Republic hosting the second round of the cross-country.

The races come thick and fast in June, with enduro heading to its spiritual home in Finale Ligure, Italy, followed by cross-country and downhill in Lenzerheide, Switzerland.

From here it’s on to a huge week of racing in Leogang in Austria as, cross-country, downhill and enduro all take to the region’s famous mountains and converge at the same venue for the first time. Enduro then heads to Val di Fassa Trentino in Italy, while cross-country and downhill make their way to Val di Sole Trentino, Italy.

July and August will see an extended break from racing, allowing the athletes some time to rest and recover mid-season ahead of the 2023 UCI Cycling World Championships which take place in Glasgow and across Scotland (Great Britain) in August.

Racing then picks back up again at the end of August with cross-country and downhill heading to Vallnord Pal Arinsal in Andorra. All mountain bike formats then come together in France.

The final racing block takes place in North America. Snowshoe in the USA will serve as the penultimate round for cross-country and downhill, before the iconic surrounds of Mont-Sainte-Anne in Canada rounds out the season.

A new vision for mountain bike

As the UCI starts to deliver its new vision for the future of mountain bike, the organisation will seek to utilise WBD’s global scale and media platforms, whilst it has begun collaborating with the two WBD specialist organisations. ESO Sports is working in partnership with Discovery Sports Events to deliver the organisation, media production and broadcast, promotion and commercialisation of the UCI Mountain Bike World Cup.

2022 Barn Burner Welcomed Riders of all Ages to Flagstaff, Arizona

2022 Barn Burner Welcomed Riders of all Ages to Flagstaff, Arizona