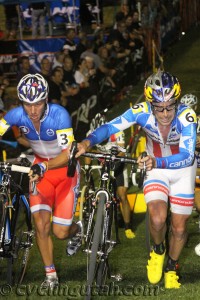 Four UCI cyclocross races have united to create a series that adds a unique twist to the U.S. cyclocross scene.  These prominent race directors announced the Cross After Dark series that will be comprised of nighttime races in September and October.

“We pioneered the idea of night cross in the US in 2002 with StarCrossed and we are excited to be apart of a full-blown series of floodlit cyclocross craziness for our tenth anniversary. I am very excited to see what seemed like a sketchy idea nine years ago turn into a new standard of what a great cyclocross races needs to be,” noted Terry Buchanan, promoter, StarCrossed.

“Who says nothing good happens after dark?” was the comment of CrossVegas organizer Brook Watts.  “We’re a group of race directors who like staging events that are ‘prime-time’ and have a different twist.”

Cross After Dark promises an overall prize list for the series of $5,000 to be split evenly between the men’s and women’s categories.

2011 Cross After Dark series races are:

Cross After Dark races are all established on the U.S. cross calendar except for newcomer Gateway Cross Cup.  The Gateway Cross Cup is a collaboration between St. Louis organizer Mike Weiss and CrossVegas’ Watts.  According to Mike Weiss, “We wanted to add some Midwestern flair to the U.S. cross scene and the early cross season is the perfect time.  St. Louis loves cycling and parties, this promises to deliver both.”

Spooky Cross director Dorothy Wong commented, “Orange County is centrally located to much of the Southern California cycling community and Spooky Cross brings out the best of cross racing including fun, fast racing, costumes, pumpkins… all under the night lights in Irvine.”

“We are extremely excited to begin our campaign in the U.S.,” said Telenet Fidea manager Hans van Kasteren.    “Bart has raced road on the east coast of the U.S. with Timothy Johnson, but looks forward to his U.S. cyclocross debut on the West Coast.”

Top European cyclocross racers such as Erwin Vervecken, Francis Mourey, Helen Wyman, and Christian Huele have also raced in the U.S. in recent years, but the Telenet Fidea trip in fall 2011 signals a continued shift in the frequency of top-tiered European competitors traveling to the U.S. to race ‘cross.  September is early on the U.S. and European cross calendar, so to see top Belgians traveling so far to compete in some of the strongest U.S. races really speaks to the legitimacy of the U.S. cyclocross scene.

“Traditionally in the U.S., you'll see top domestic racers travel, vacation, or live in Europe to hone their cross skills against European competition,” said Zac Daab, co-promoter of StarCrossed Cyclocross in Seattle, WA.   “This year, Telenet Fidea is heading to the U.S. to string a series of races together for Bart Wellens and Rob Peeters that allow them to gain early season fitness, capture UCI points and test themselves over here before the 2013 Worlds.”

CrossVegas promoter Brook Watts added, “I've been preaching the benefits of the early season U.S. races to the Europeans for some time, I think we're at the tipping point now where they see the value in making a trip over here to compete against our top pros who start the season well prepped.”

Complete Series details will be available at www.crossafterdark.com.