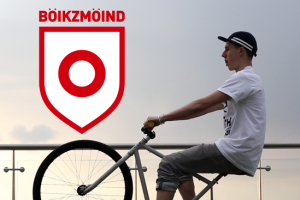 StruckAxiom and the AIGA’s Salt Lake City chapter are hosting the premiere of BÖIKZMÖIND: a 30-minute documentary film about fixed gear bikes in Bristol, England. The film’s director, Gavin Strange, will also be in the house for a discussion on design and a Q&A after the film.

The event takes place at the Salt Lake Art Center at 7:00 PM MDT on Thursday, October 27th. Tickets for the event can be purchased online at: http://slc.aiga.org/

All attendees will also be provided with a limited-edition letterpress poster designed by StruckAxiom team and their partnered printer The Mandate Press.

Gavin Strange is a Senior Interactive Designer for the digital department of illustrious Aardman Animations in Bristol, England by day. By night, this young, ambitious creative goes under the alias of JamFactory, where he’s already launched he’s own line of vinyl toys called Droplets and has just finished directing his first documentary film on fixed gear cyclists in Bristol called BÖIKZMÖIND (Bikes, mind). Gavin is a regular on the speaking circuit. He covers the topics of creativity and entrepreneurship at conferences, universities and is often the featured speaker at London’s flagship Apple Store.