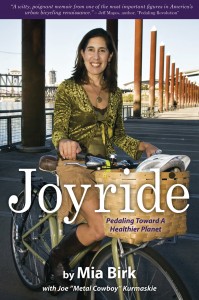 JOYRIDE: Pedaling Toward A Healthy Planet

By Mia Birk (with Joe Kurmaskie)

Imagine if you can, being an air traffic controller landing planes in a busy airport. Imagine now that the airport director decides that hang gliders are now going to be landing in the same airport. Why hang gliders? Because they are non-polluting, good exercise, relatively low cost, super fun and take up less space. Air traffic controllers are now in charge of landing these new intruders onto the runway and trying to come up with new designs of landing strips to accommodate the hang gliders. Substitute city streets for the airport runways and bikes for the hang gliders and you have the basis of what Joyride is all about. The chief “bike traffic controller” is Mia Birk. She went to Portland in 1993 with the task of integrating bikes into the former bicycle wasteland of Portland. She left that position in 1999 creating a bicycle infrastructure model in Portland that is now looked up to by most other cities that want a bicycle friendly environment.

The landing in her job was a little bumpy and turbulent, but she had a core of “pilots” helping her, primarily former City Councilman (and former Congressman) Earl Blumenauer. With opposition from nearly every aspect of the community, Mia pressed on. She was called a “communist, hippie, piece of s***, thief, road lice, and was harassed to the point of filing a restraining order”. With support of the cycling community, scientific data, perseverance, a lot of meetings, political acumen, and some “arm twisting,” Mia spearheaded the change in Portland from a city with 65 miles of unconnected bikeways to a nationwide leader of progressive bikeways that included 215 miles of mostly connected bikeways. This included crossing a few car-choked and train bridges that were in the “can’t be done” category.

Through the book I was able to see Portland go from a “backwaters” bicycle town to a national leader for bicycle progressiveness. The determination and organized manner to tackle problems was truly was inspirational. In one sequence permission to build a bike trail along a river involved the city, state, the U.S Fish and Wildlife Service, U.S. EPA, and the U.S. Army Corps of Engineers, in part due to a non-existent fish that may eat an endangered species of fish.

For those that work in bike advocacy, there are lessons to be learned as “it takes a village” to make a community bike friendly. Mia spearheaded and guided the changes but she did so with support from the top (the Mayor and City Council) and from the bottom (the thousands of cyclists that rode in response to the changes). Step by step, you will read how Ms. Birk transformed Portland. Now remember, this book isn’t a John Grisham thriller, it is about, as Senator Orrin Hatch might say, a faceless bureaucrat. So you may find yourself taking a few breaks from reading, but it is in my opinion a book you should read from cover to cover. If you skim through the book, you will miss some hilarious moments. For example, there is the proverbial Catch-22. Mia is credited with enacting some unique additions to city streets such as shared lane markers. However these new ideas were not in the manual of Uniformed Traffic Control Devices (MUTCD) or “the manual”. So her ideas couldn’t be implemented if they weren’t in the manual. In addition, if the requested changes are not in the manual, her ideas couldn’t be tested for inclusion in “the manual”. On one years-long project Mia nearly gets the go-ahead for a bike design in California but gets stymied at the last minute because California wants national approval for change but the national MUTCD committee wants to see how the design change works in California before it will approve the change. So with research, stealth, meetings and phone calls, she managed over time to work the current collection of bike symbols into “the manual”.

After 6 years in Portland, Mia joined the Alta Planning + Design, a firm dedicated to bicycle, pedestrian and trail planning, design and implementation. The final third of Joyride is about her time with that firm. Mia was able to “spread the love” of bicycling to other cities in the U.S. Alta Planning + Design was mentioned in a Salt Lake Tribune article as a sponsor of the most recent bike count in Salt Lake City (“Number of SLC bikers rises”; Dec. 18th, 2011).

With more than 12 years of experience condensed in a little more than 200 pages the reader of this book will receive an extensive lesson on what it takes to make a community more bike-friendly. There is even a 3-page step-by-step guide (courtesy of the League of American Bicyclists) at the end of the book that can be used as an outline for someone looking for instructions on how to push a project through the hoops.

This is a good book to read. It will give you a great overview of what can happen to a city with the goal of being more bike-friendly. You can see the analogy of early Portland with Salt Lake City. Recently Salt Lake City increased its funding for bike projects under Mayor Ralph Becker and a bike friendly city council that includes Luke Garrott. The city hired bike/ped coordinator Becka Roolf who has been tasked with the responsibility (along with Dan Berganthal) to implement change in the city. Will Salt Lake City become the next Portland over the next 6 years? Read the book, become inspired, get involved and perhaps we will read Joyride II, with the heroes of the book being our own Becka Roolf and Dan Bergenthal.

Book Review: Cycling for Everyone

A Review of South Pole Epic by Daniel Burton