By Lou Melini – How far can we push ourselves? What is stopping us from pushing further? In Endure, you probably won’t find the absolute perfect answer to those questions, but you will gain a lot of information about those questions. 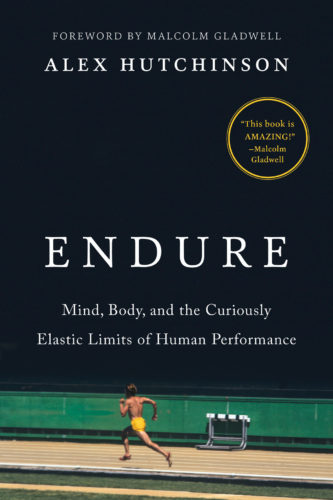 Alex Hutchinson is a former national-team long distance runner, a Cambridge-trained Physicist and a journalist, one of 2 journalists granted access to Nike’s training project to break two-hours for the marathon time. The Forward of the book is written by Malcolm Gladwell, who had 5 books on the NY Times best selling list. (I read 4 of them.) So of you are a fan of Malcolm Gladwell, Mr. Hutchinson’s book mirrors Mr. Gladwell writing style.

Mr. Hutchinson takes you back over the past century to discuss case studies, science and success stories involving human endurance. He then brings in modern day physiologists to discuss the questions of human endurance and how far can we push ourselves. Can the Nike training project break 2-hours for the marathon. (They missed by 25 seconds though not an official record and the project will retry later this year).

Chapter 5 is titled “Pain”. In this chapter, cyclist Jens Voigt is featured, famous for his response to leg fatigue by saying; “Shut-up, Legs!. Shut-up Legs is the title of his book where he states; “I learned to set my pain threshold higher than other people’s”. Mr. Voight gives credit to his ability to endure pain to make him a successful cyclist. In the same chapter, Eddy Merckx, perhaps the most famous cyclist in history, set the 1-hour world record in 1972. At the end of the world record; “he couldn’t move, he couldn’t speak” When he could speak he said; “it had been terrible. No one who had not done it could know what it was like”.

Much of the chapter discusses the science of pain to show how elite athletes can tolerate pain more than non-elite, though most of us probably knew that if one saw Merckx race. At the end of the chapter, Jens Voight is again featured as he also set the hour record. The question of suffering again came up. Did Mr. Voight simply set the record by tolerating pain more than the others that set the record before him? Do elite athletes have the capacity to suffer more or does their training push them to be able to tolerate greater levels of pain? Read the book.

With additional chapters titled Muscle, Oxygen, Heat, Thirst, Fuel, Training the Brain and Belief, the reader of this book will find an immense amount of data, studies, case studies, and athlete examples backed by 24 pages of “notes” at the end of the book. Interviews with notable physiologists such as Tim Noakes add much to the book. There is a lot to digest and I will find myself rereading sections to obtain a better understanding of the concepts.

After reading the book the question of what is primarily stopping us from pushing further, the mind or the body is never fully answered. Having completed 2 10-weeks rides across the U.S. and a 25-week walk on the Appalachian Trail, my vote is the mind is the controller of pushing the limits. In Mr. Hutchinson’s book, the mind is given a lot of credit. After reading the book I thought that a statement by physiologist Michael Joyner in the chapter, Belief, summed up what most athlete’s know, “All the blandishments of modern sports science-altitude tents and heart-rate-variability tracking and bioengineered sports drinks and so on- amount to minor tinkering compared to the more elemental task of pushing your mind and body in training, day after day, for years.

There are a lot of books on the market that discuss how to improve human performance, endurance and success in sports and life. I’ve read a few such as Fast after 50 by Joel Friel, The Pursuit of Endurance by Jennifer Pharr-Davis (who once held the record for fastest time completing the Appalachian trail, and Grit by Angela Duckworth (a non-sport book but relevant to success) Endure is good read and would be an excellent complement to any training manuals that may adorn your book shelf.