By Jamie Morningstar — Kylan Lundeen is a thirty-something Provo resident, head of marketing at Qualtrics, husband, father of three, and committed cycle commuter.

C.U.: Kylan, tell us a little about your start in cycling

K.L.: I first started riding bikes about six years ago when my brother-in-law invited me to participate in a community triathlon with him. It was just before my 30th birthday and I borrowed an old Cannondale from my father-in-law and set off on my first training ride. I think I had formerly resisted the idea of cycling because I didn't see myself as a spandex wearer, but after my first ride I was completely hooked. It was the first time I remember being excited about endurance exercise (as opposed to my usual reaction to jogging of, “Wow I never want to do that again!”). I think I was wearing basketball shorts and a t-shirt on that first ride and I literally stopped by the bike shop on my way home and purchased my first pair of cycling bibs. After that I was a proud spandex man. 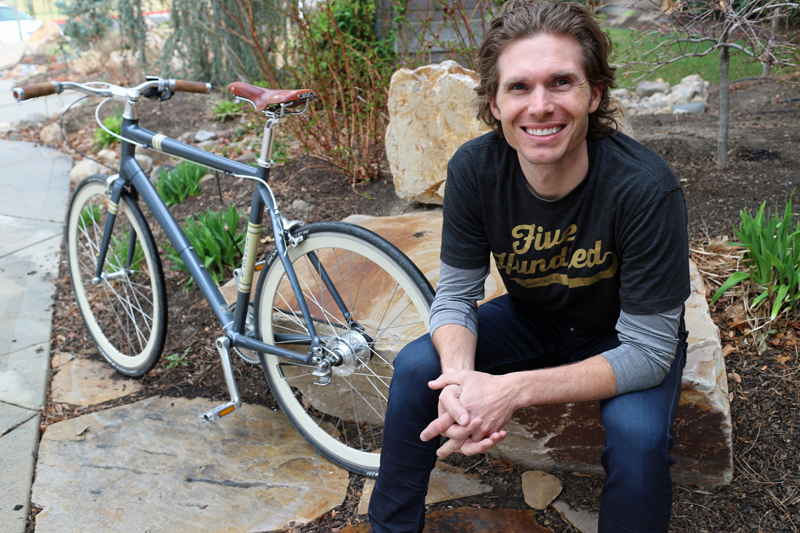 I had a really good experience in that first triathlon. A couple of weeks later I opened a birthday gift from my wife and found a registration confirmation for the tour of St. George, a 107 mile bike race through the desert. Up until then my longest single ride had been 30 miles and the race was just a month away! I was surprised and thrilled that my wife thought I was tough enough to participate in such an awesome endurance event. So I jumped on KSL and started looking for a bike. After spending hours researching and looking for my perfect bike I finally found it – a 2005 Trek Madone 5.9 Super Super Light. It was an amazing bike with all the best components. Five years later I'm still riding that same Trek. I've taken good care of it and in turn it's been good to me.

C.U.: When did your recreational cycling turn to cycle commuting?

K.L.: I started commuting by bike a few years later, while living in Palo Alto and attending the business school at Stanford. I lived on-campus, but school sprawls over 2,000 acres, so getting from one class to another often involved a pretty healthy bike ride.

During my first year at Stanford I rode around on a beach cruiser, but soon found I wanted something a little more zippy to get around. The pedals-forward geometry of the cruiser was bothering my knees a bit, and being in the San Francisco Bay Area meant I was exposed to all kinds of cool fixies, urban cruisers, and custom city bikes. I got bike envy.

So what bike did you end up choosing?

K.L.: That first summer I went to work finding the perfect commuter bike. Since I was already a fan of Trek, I started there and soon came across the Trek 1st District. I still think it's the most beautiful bike that's been manufactured in the last 10 years. Right away I got to work customizing my District and making it my own.

C.U.: Tell us a little more about making your bike uniquely yours.

K.L.: I wanted my Trek 1st District to be a great all-around bike. The stock single-speed was perfect for my commute, but I wanted more flexibility for family rides so I added an internal seven speed hub for the belt drive. The bike is steel and the belt drive is a bit heavy, so it was worth it to me to add extra gearing so that I could pull a trailer full of kids up Provo Canyon. The hub has been awesome – clean, quiet, and no maintenance.

My next customization was to get the most comfy saddle I could find – a nice leather Brooks. I also upgraded to Brooks handle grips and I'm planning to swap out my pedals next. I’d also love to shave a little weight off the bike so I might add some Dura Ace brakes.

C.U.: So after cycling for just a few years you were doing some serious customizations on your commuter ride. How did you get the courage and know-how to complete those large upgrades?

K.L.: I’ve always been a tinkerer. My dad taught me from a young age that you could pretty much fix anything if you had the right tools. There is a joke in our family: “No project is too small to buy a new tool.”

Growing up I loved to hang out with my dad in the garage. When I was a teenager I would I would tell my friends I had a bunch of homework to finish over the weekend and in order to make more time for projects with my dad. He taught me to be confident in my ability to build and fix things.

When I decided I wanted to put a rear hub in my District, I first prepared by watching as many YouTube videos as I could get my hands on. Despite exhaustive searches on forums and websites, I wasn’t able to find anybody who had done exactly the same hub swap on the same bike. I saw lots of questions about how to swap the hub out on a Trek District for an Alfine, but no one had posted any answers. I usually only consume how-to tutorials, but with this upgrade I decided to give back to the community and I documented the project with a short YouTube video and a parts list. As of today, there are about 40,000 views. You can see the video at https://youtu.be/yDAera8Iyqw

C.U.: Tell us more about your daily commute.

K.L.: Having a bikeable commute is really important to me for two reasons. First, I always want to live close enough to work that my commute does not take away from time at home with my family. So, when we moved to Provo for a new job a few years ago, we made it a point to find a place close by my work to facilitate a short, bikeable commute.

Second, my wife and I are committed to being a one-car household, so it’s imperative that we live within an easy ride from my work. I think that using my bike as my primary mode of transportation helps out the environment a bit – incorporating my bike into my daily commuting patterns leaves me noticing my impact on the environment more than ever before. Plus I just like the exercise!

C.U.: What’s your best advice for a new cycle commuter

K.L.: I've learned couple things the hard way. First, get a really good lock. I had two bikes stolen while living in California, both of which were locked at the time! I recommend the New York Forgetaboutit Lock. It weighs like 20 pounds, but I finally feel secure leaving my bike unattended.

My other piece of advice is to have a basic tire repair kit with you all the time. There's nothing worse then getting a flat and having a slow walk to or from the office when when you planned on a quick 10 minute commute. To eliminate flats I also run Continental Gator Hardcase tires which seem to perform really well. I put almost 2,000 miles on my last pair with no flats – I like that record!

C.U.: Does your commuting extend into seasons when weather can be more challenging for riding?

K.L.: I do ride in all kinds of weather, all year round. It’s funny, because on rainy days rather than simply adding fenders to my bike I choose to wear clothes that I don’t mind getting ruined. It’s definitely the vain side of me; I love the way the bike looks, and I don’t want to change the mood it creates when I ride it, even if it means my clothes get a little wet or dirty. I like the way I feel when I ride my commuter, it makes me feel about 20% cooler than I really am. However, my vanity comes with a price – I’ve gone through more than my fair share of messenger bags that have served as fenders.

C.U.: Do you use your bike for around-town riding?

K.L.: Yes! I use my bike to run as many errands as possible. In fact, I've learned that I'm a happier person and generally a better human if I get a little riding time in during the day. I take every excuse to run errands on my bike, including lunch appointments. I find that pulling up to a meeting with friends or colleagues on my bike is always a great conversation starter, and I learn that most people wish they rode their bike more often.

And what’s my most important ride of the day? Riding home to see my wife and kids during lunch or after work, of course! 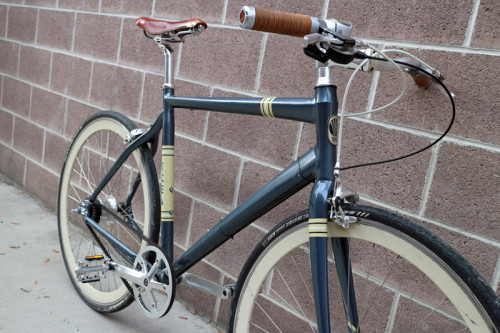 If you have a suggestion for a commuter profile, have a commuter question, or other comments, please send it to [email protected]

COVID-19 Pandemic Has Been Good For Cycling

COVID-19 Pandemic Has Been Good For Cycling