I've always liked criterium races, though I've only been in one, which I won, but we'll get to that in a bit. I do a crit a couple times a week in my neighborhood. I'm the only one in the race and it's not a square as much as a very long rectangle with a slanted roof on it along the bluff. I like to do five laps because after that I get a little bored and it feels like I've gotten the blood flowing enough. 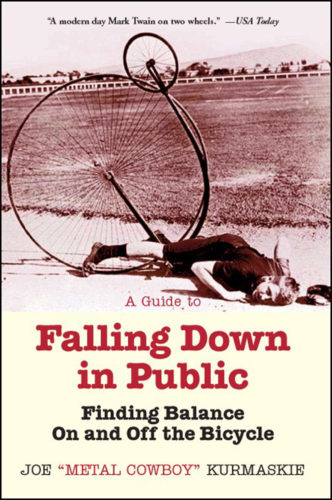 I lean into the corners and open it up on the long straightaways and sometimes I narrate in my best color commentator voice, “It's time to open up the suitcase and see what tricks are stored in there.” “Dig deep, lad. It's the bell lap.”

Sometimes I pass other riders who don't know they are in a race. Mostly I like taking the air and seeing the angle of the sun across the pavement when it's beaming through the trees. Mostly I like feeling alive and in motion.

In 1996 I was covering the Tour Of The Gila for the newspaper where I worked. My landlord was one of the race sponsors. He co-owned the local bike shop and he was a pretty chill guy. He partner was a ball of stress. You know how you can actually see stress swirl around some people? It's a five-day stage race with a crit in town on that Saturday. I rode along on the long day out to the cliff dwellings and appreciated how fast these non-bodyfat fuckers could coax a bike to go.

The Saturday race was in multiple parts. The women raced in the morning, then the citizens crit. Then the men's cats in the afternoon. My landlord came out at about 5 minutes before noon with a mountain bike and told me he'd signed me up for the citizen's race. I waved it off and pointed out that I was wearing hiking boots. The gun sounded and he literally ran me to the start line and pushed me forward. I had a few seconds to decide to peel off or dig in.

I have this default feature built into the reptile part of my brain … it's always set on fight. So I did my best to get my hiking boots onto the middle of the pedals and I dug in, hard. so hard I had to back off a bit so as not to blow up, but that was after I'd caught and overtaken the pack.

I held my line in my Mountain Hardware shorts, Suwannee Country Tours tank top and hiking boots. I looked absurd, I felt exhausted. By the third lap I contemplated dropping off the back but half of the town, my friends and neighbors were chanting “Joe, Joe, Joe” at every corner. Several of their dogs chased after me, mistaking “Joe” for “go” perhaps.

Much of my life has followed this track … a push from nowhere, chaos, excitement, sound, fury, pain, and motion, then at some point a big smile turns to laughter because fuck, it's all gonna be over soon enough so enjoy the ride.

A hundred yards out my boot slipped the pedal and I almost went down, but I went loose and completed the motion catching the pedal again. When it was over, I was laying on the ground thinking is this what a heart attack at 29 feels like?

The Ilg brothers helped me to the curb where I sat with my head between my knees for an indefinite period of time.

“How do you feel?” Craig's brother asked.

Still a bit breathless, I could be philosophical, “Like I will stick to touring for here on…”

When they put the medal around my neck I chuckled, realizing that since I was the reporter, I was going to have to write about my win in the third person when listing the stats for that day. Since the race was a loop, it somehow made sense, as if seeing myself as I came around to the start.

On stage, I manage to blurt out, “Next year leaving the hiking boots at home … maybe flip flops.”

Joe Kurmaskie is a journalist, syndicated columnist, and contributor to numerous magazines including Outside, Bicycling Magazine, Men's Journal and Parenting. He's a bike advocate, activist, found of Cadence Press, and a Random House author of seven books including Metal Cowboy, Mud, Sweat and Gears and A Guide To Falling Down In Public.

A Guide To Gravel Bike Tires or A Theoretical Treatise on...