Each and every one of us in the cycling community has at least one funny or even ridiculous event that has transpired throughout their respective lives. Mine started in 1982. I was introduced to professional road racing at the age of 12. 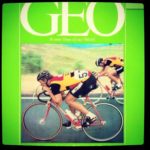 We had always ridden bikes, but this was different. I was in the Boone Grove Elementary library, scanning through magazines, and came across the 1981 issue of GEO magazine. On the cover of the March #3 issue was a picture of Greg Demgen and Steve Wood bombing in the Coors Classic.

Instantly I knew I wanted to ride road bikes, and ride fast. I had to have a pair of the S101 shoes that they were wearing ( later found found out that was SIDI), and ride a Raleigh bicycle. I couldn't find a kit to wear, or shorts, but managed to find what I thought was a sweet jersey! Found some old black shorts, and the “jersey” and went out for a spin!

When I got home, I remember my mom asking how the ride was, and I said “awesome',. Then she looked at me and asked with a smile, “why are you wearing my old maternity shirt, and backwards none the less?” Ummmmm, I didn't know what it was, but it sure looked close enough to a real cycling jersey, what with the colored arm bands, and sweet half zipper in the front (er, back). I didn't care, I wore until one day I was out riding and was stopped by my neighbor up the road.

This is rural Indiana, not a lot going on for sure. Mr. Jones noted that he sees me riding all the time, and that he was impressed, and that he had a friend that I should meet. Mr Jones was former racer himself, and I'm sure kept some fast company. Part of the Chicago Wheelmen, there were plenty of fast dudes scattered around Northwest Indiana, and Mr Jones was no exception. Mr. Jones met with myself and my mom, and arranged a meeting with his friend. His name was Wayne Stetina.

I'll never forget going over to Wayne's house, and the kindness that we were met with. Mr. Jones had told him about my “jersey” I'm sure, and Wayne was beyond considerate when he brought us out to his “garage” and there were rack after rack of colorful jerseys, and bikes.

He dug through some stuff and pulled the 1979 Pan AM Games Race Leader jersey, his 1976 wool Stars and Stripes Olympic Jersey, and some really awesome Protogs wool jerseys. He presented them to me, and said that these would look much better, and to wear them with pride.

Words really can't really describe how elated I was, and what a positive impact that day had on my life. Not just in the cycling realm, but all other as well. It taught me to always be kind, and to share with those who might not be as lucky. 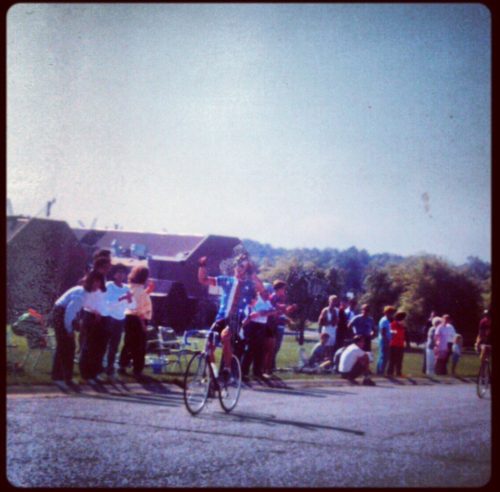 I went on and joined some local races that coming summer and actually won a few races, including one with the Stars and Stripes on. Arms up, after an attack, one of my proudest moments as a cyclist. I still have all those jerseys, now they are framed and hang on our wall at home.

I was lucky enough to search out Wayne last year at Interbike, and re-introduced myself to Wayne and thanked him again for his kindness. He is now the vice-president of Shimano Corporation. I remember that day at his house, he wanted to show me these “new” clip-less pedal systems. He gave a pair of Beta MS1 shoes, and let me ride a newer version/prototype of the now 10 year old Dura Ace groupo. What a thrill. This was 1983.

By this time I was enamored with pro cycling, and especially the European peloton. Greg Lemond and Laurent Fignon were my idols, along with Bernard Hinault. I started taking French in 7th grade, and studying the Tour de France in depth. Winning Bicycle Racing Illustrated covered my walls, and knew I had to make it to France. 1985 rolled around and my fantastic French teacher Madame Virgil set up bake sales and other means to help me be an exchange student for the following summer. I signed up, and sure enough we raised enough money to send me to France.

I couldn't have been more thrilled than living ion France, with a French family, during July of 1986, and being in the Alps while Greg and Bernard battled it out for glory. I was till recovering unfortunately from being run over during a local time trial event that was held out on the country roads of Indiana. Full hit and run, never caught the guy, and my bike and my whole kit. 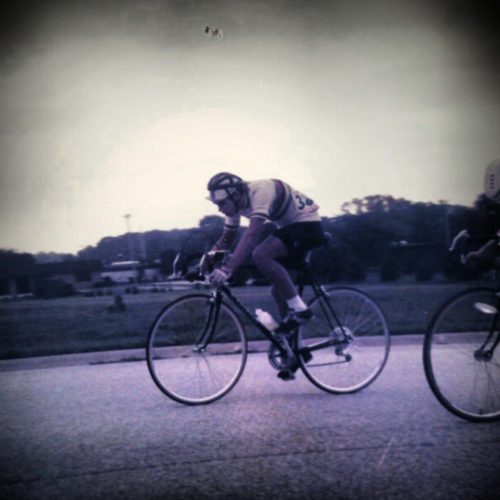 The yellow Jersey from Bike Nashbar and my Campagnolo shorts were ruined. Along with my hand, knee and full body road rash. Recovered, and got into another Raleigh Super Course and kept riding! I slowly became more and more wary of road riding. I was scared of being hit again. Bought my first Mountain bike in 1987, and was soon loving it.

I moved to Jackson Hole in 1990 with that bike, started riding real trails, and soon dumped it and pulled into a sweet Gary Klein Rascal. I love riding mountain bikes as well, but couldn't get back on the road for years. Finally Jackson Hole started coming correct with bike paths, and I decided to jump back on the road bike again. All this while watching Lance, Indurain, and all the other boys crushing.

I would talk to myself when I was out as if in the voices of Phil and Paul, still feeling the romance of the European Pro Peloton. Its been 10 years now that I'm back on road, and I still love to ride mountain bikes as well. I work at a fantastic pro shop called the Hub Bicycles.

It truly is the way to stay in touch with technology and being part of the “wellness” tribe of cyclists on a global level. Might not be able to run or ski forever, but there really is a good chance of being able to pedal bikes. I myself, like the rest of the cycling community have no words to describe how amazing it is to see Sagan, and Valverde, and Greg Van Avermaet, shredding the classics, attacking, and going for solo stints , the same way our heroes of the past did.

I have put the responsibility of my children and future bike riders at the front of why I preach the benefits of riding bikes, and riding responsibly, even if it is with my mom's maternity shirt from the sixties.

I Did My First Triathlon

Heroes for Just One Day

I Did My First Triathlon

Heroes for Just One Day

The Crash on Kaiser Pass

Sometimes a Bike is Much More Than a Bike

Celebrating the Holidays by Riding Your Bike