By Lou Melini — I was introduced to Conversations with US in an issue of Adventure Cyclist magazine. Adventure Cyclist doesn’t write book reviews but the brief description of the book was enough to arouse my curiosity. I was a bit hesitant to purchase the book as I have bought a few over the past couple of years that didn’t hold my interest. Thankfully, I was not disappointed with my decision. 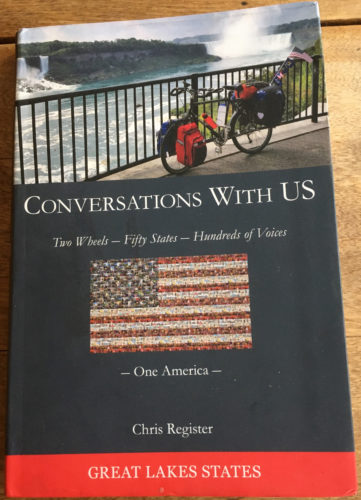 Mr. Register wrote this book after completing a bike tour from Duluth, Minnesota to Rochester, New York. The title, Conversations with US, refers to interviews of people that Mr. Register met along the way. I think the capitalized “US” refers to the United States though a few Canadians said their piece as well. The interviews in the book focused on a few topics, primarily about the lives of the subjects. I found this aspect of the book similar to the writing of Studs Terkel, whose writing I enjoyed immensely.

Over the past several decades I’ve read many cycle touring books, many of which I have reviewed in Cycling Utah. Conversations with US is one of a kind. I enjoyed the book, perhaps because I make some attempt to engage people in conversation while on tour, more so when I travel alone as Mr. Register did. I’ve never formally interviewed people, but I could relate to interviews from some of the conversations I had on my tours.

Bike touring is a small segment of bicycling culture so a niche book like this definitely won’t make the New York Times bestseller list, but I think it would be a good read to many in the general cycling community and even to some non-cyclists.

Though he traveled through what would be considered a politically conservative area of the country, Mr. Register presented a great amount of diversity of viewpoints in the interviews. The subjects were varied and interesting in a manner that kept me engaged in the book. Ernie Broadnax (I didn’t know blacks were not allowed to own a patent until the 1900’s), Union man Rudy Nelson, state park worker Gail Horein and 1963 Miss America, Jackie Mayer (she had a stroke at age 28) were some of the people that Mr. Register had conversations with. Amish storekeepers, farmers, factory workers as well as a few Canadians commenting on America were part of the conversation as well.

The touring portion of the book was presented well. I often found myself reading more in a sitting than I planned. There were many pleasant days, and a few that Mr. Resister wished to be different. His first day on the tour was on a “borrowed girl’s mountain bike that was 3 sizes too small and purple”, as his touring bike was somewhere in the FedEx system of delivery south of Duluth. He rode around town before returning to his host for the night and the arrival of his bike. On the last day of his tour his tent blew away into the Erie Canal. Fortunately the rest of his tour went well. Many of his interviews led to meals, lodging, and general assistance for his travels.

If you are looking for a cycling book to read, take a chance on this book as I did. It is easy to read, well written (Mr. Register is trained as a lawyer), and interesting though perhaps not a page-turner as a John Grisham legal thriller. I think you will come away pleased with the book.

Lou Melini is a lifelong bicycle commuter, and the former Commuter Column editor for Cycling West.

Antelope Island: A Californian’s Utah Bicycle Adventure in the Time of COVID

Antelope Island: A Californian’s Utah Bicycle Adventure in the Time of COVID