The major market for bicycles should be adults. No – children, mainly boys. People who need to get to work. No, recreational enthusiasts. Men. Women. The upper classes. The common worker. 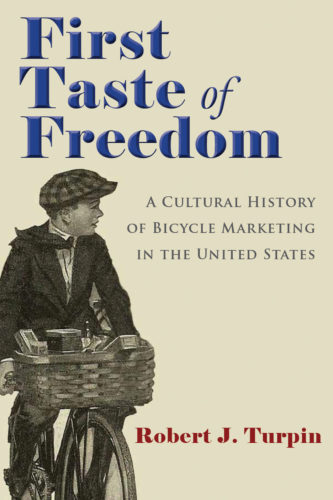 Of course, all of the above ride bicycles. But the main market that the industry tried to sell to changed with economic conditions to emphasize these different audiences in different eras of American history since bicycle manufacturers got serious about selling them in the United States, circa 1868. The history of the selling of the bicycle to the public in this country is documented in a new book called First Taste of Freedom: A Cultural History of Bicycle Marketing in the United States by Robert Turpin, a history professor at Lees-McRae College in Banner Elk, NC.

A few people were riding bikes here in the 1830s, but the two-wheeler didn't become a cultural phenomenon until after the Civil War. The book takes us on a tour of how changes in society (and somewhat advances in vehicle design) repeatedly caused the industry to adapt and change the market it went after. The author writes of a few corporate execs, including the heads of Schwinn and its predecessors. But the book remains devoid of any understanding of the personalities of bicycle promoters. It provides more of an informative than an exciting read.

As Turpin puts it, the “bicycle has long been a part of American culture but its image and significance have been ever changing.” In the 1800s, manufactures plied them as transportation for adults. As the automobile became more and more popular, bike makers had to find other ways to sell.

Like many other innovations, from the telephone to the Internet, it took a generation or so for the bike to catch on. Even without cars, people got around fine with horses. Early on, the closest many people came to seeing a bicycle was watching racing as a spectator sport, often an indoor one to boot. A bike race could draw seven times as many people than a professional baseball game at one point. Back in the 1890s, several million Americans owned bikes and made-in-America bike sales topped a million a year at its peak in 1899. About 250 factories in the country made bikes back then.

But with the rise of the automobile, the main market, the well-do-do white male, lost interest after the turn of the 20th Century. But each attempt to find a new market turned off the previous one. Selling bikes to the middle-class made the wealthy consider riding at all (instead of just the saddle) beneath them. And marketing bikes to women turned off men who saw the bike as a masculine activity. And turning to children made adults consider cycles as toys to be outgrown.

Concurrent with the women's suffrage movement, industry marketed to women as a way to sell more bikes and women saw cycling as a way to show their independence – it allowed them to get further away from home and family surveillance. But the idea ran into some resistance as the “bicycle's ability to free women from their homes to enjoy the same spirit of adventurism as men enjoyed was a privilege that men were often reluctant to share,” the book reminds us.

But as more women attended college, they became a bigger target of the industry – a bicycle gave a college student more freedom, not necessarily to get around campus (most of which were rather small) but to get off it and around and out of town for a break. The bicycle became a vehicle for the liberated woman.

Another theme throughout the history of selling bicycles that reoccurs in the book involves the growth of automobiles competing with or living alongside the demand for cycles. “In the 1910s, bicycle boosters continued promoting the bicycle as a curative for the ill effects of overmechanization and urbanization,” the book tells us. This came after the growth of the auto industry in the early 20th Century coincided with a dramatic drop in bike sales.

And yes, Donald Trump's tariffs weren't the first ones to cause harm to the bike industry: the book shows that when import and export restrictions on bicycles and parts thereof were reduced, sales soared. Someone always profits from wars (let's face it; otherwise why would we fight them?) and World War I helped the bicycle industry recover as during the war, trade restrictions were lifted. Also, a PR campaign encouraged civilians to do their part for the war effort by saving gas; ride a bike.

And you don't see much of this today (unless you count the ebike boom), but at one point it was common for a cycle shop to sell both motorcycles and bicycles, which created confusion about which they would promote. One way out consisted of a store trying to sell a motorcycles to a father and convince him to buy a non-motorized vehicle for his son.

The book also talks a lot about of design changes to attract children. Sometimes makers designed children's bikes to look like cars, motorcycles and even airplanes so kids could play adult. Children, especially boys, became a major market and ads touted “A bike is the birthright of every American Boy” and “Boyhood without a bicycle is like a summer without flowers.” Ironically, the industry promoted bicycles for kids as the perfect Christmas present, since it was the one great gift-giving occasion of the year, though it was hardly peak riding season in most of the country.

While the book includes 55 pages of footnotes and bibliography, the quotes and illustrations largely consist of ads in trade journals to tell us what the industry was thinking. It gets redundant after while, going on and on throughout the book about the conflict of marketing to adults vs. children, for instance. But it seems that was a major issue in most of the industry that seems to have been resolved by now. The growth of the suburbs made cycling more attractive to children but less so to adults, who thus had too long a commute by bike. So when the industry did sell bikes to adults, it had to shift the focus from transportation to exercise and recreation.

As bicycle accident rates soared, it had to address safety. It was often reluctant to do so, however. Cycle Trades of America (CTA), once the major trade association, ignored the issue, much as automobile manufacturers did for too long. Turpin writes that in the 1920s, the “CTA downplayed the safety concerns altogether. Instead, it instructed their two touring bicycle advocates – whose primary job was to visit schools and talk to children about bicycles – to refrain from talking about safety issues for fear that it would become the focus of the conversation.”

And, if you believe the book, we still need to pedal up mountains to enhance the image of the cyclists. Even today, “adults who regularly ride bicycle are still often considered odd, or at least unconventional. Many Americans associate the bicycle with transportation for those unable to afford a car.”

The history book takes us through the Depression and World War II. The former didn't seem to have depressed the growth of the bicycle – more because people needed cheap recreation than transportation. And even back then New York City made a point of building bike paths in its parks, though cities back then didn't think of adding a lot of bike lanes for transportation purposes as they do today.

Then after the war, as the nation grew in affluence, children became such a market that manufacturers “began creating bicycles that were literally toys, equipping them with holsters for cap guns, and donning them with the insignia of child television stars and comic book heroes or even cartoon characters such as Donald Duck.” The 1953 Mead Juvenile Ranger, for instance came with cap guns and a design made to look like a cowboy's horse. The industry also set up kids' bike clubs (today largely the province of adults). While producers once promoted the bike as a means of independence, it later tired to promote groups.

Federal policy, however hampered growth of the bicycle, the author says, first by the War Production Board's decision to limit bicycle manufacturing in World War II and post-war by building the Interstate highway system, which further encouraged adults to drive rather than bike.

Adults didn't start getting interested in biking again until the 1970s but the book can't explain why, with the gasoline shortages of the era and the economic doldrums of the early 1980s only minor factors. Much of the increase consisted of interest int BMX and mountain bikes, and later hybrids, the stuff of recreation.

Though the book was published this year, recent history gets short shrift. It says the first bikeshare program launched in Tulsa, OK in 2007 and quickly became a phenomenon –but the subject gets only one paragraph. And the narrative stops in 2012. But if you want to know how the industry marketed and sold bicycles to the American public in generations before you even tried a tricycle, the book will probably constitute as good a chance as any to learn. It's easy and fun enough to read. And you can probably relate to at least part of it personally since you've probably ridden a bike as a child, feminist, commuter or other marketing target. And you can see how the industry saw the other types of people.

The ‘good ole days’ not so different from today