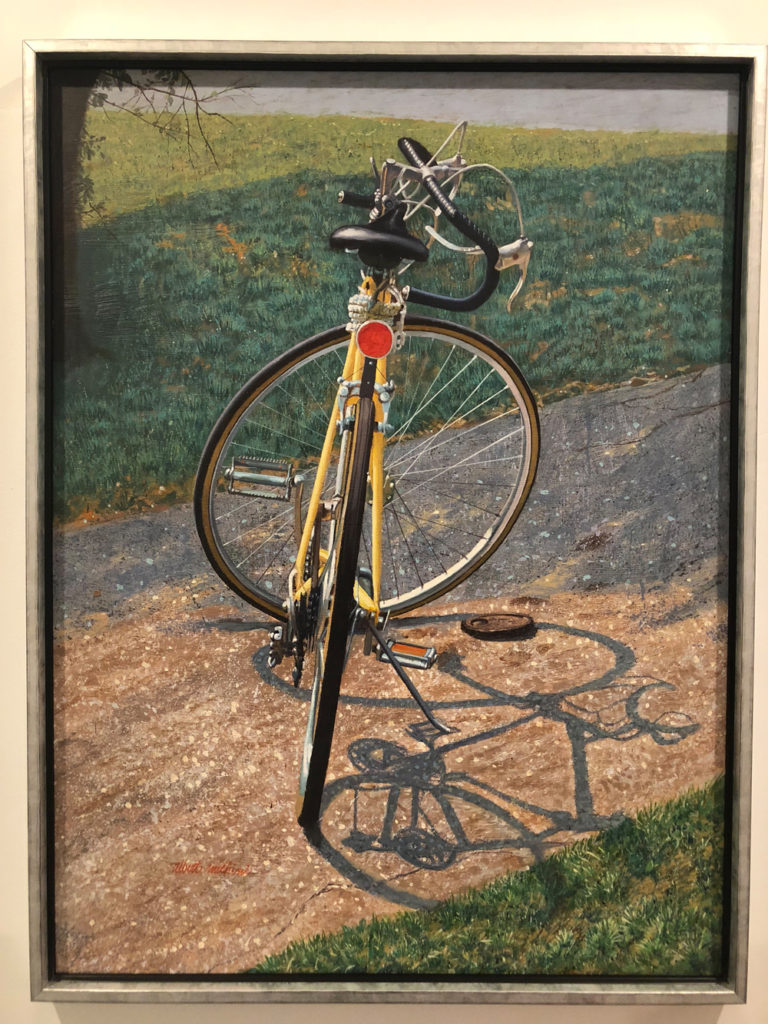 Brief biography: Albert Michini’s style of art was realism and his works always reflected proper proportion, detail, and light patterns. He was a painter, sculptor, photographer, sketcher, and etcher. One of Al’s passions was anything with wheels. He incorporated bicycles, motorcycles, airplanes and cars in many of his works. Riding his bicycle around town, down by the water, was a daily habit in the summer in Connecticut. He even commuted to work on his motorcycle with paint boards strapped to the back.

He was born in 1925 in Philadelphia, Pennsylvania and spent most of his life in the area. Al was the oldest of 5 children and the son of Italian immigrants. At the age of 18, Al enlisted in the army and became a platoon leader traveling through Europe as the allies reclaimed German occupied territories in World War II. After the war, he returned to Philadelphia and enrolled in the Hussian School of Art where he obtained a bachelors degree in fine arts. Upon graduation he became a teacher at the Hussian school and also worked as a freelance illustrator.

In the mid 1960s Al moved his family to Connecticut to teach at the Famous Artists School which was an art correspondence school founded by Norman Rockwell and Albert Dorne. During this time he continued his freelance work which included some notable things such as the 1972 Boy Scout manual, Golden Book Encyclopedias, and back covers for The Saturday Evening Post, Creepy and Vampirella magazines. He also wrote a book called “The Artist and The Camera”.

In 1976, Al moved his family back to Pennsylvania to work as a sculptor of commemorative coins for The Franklin Mint. At that time he also joined the Air Force Art Program. Through the program he was able to witness the rollout of many new planes and produce paintings of these planes. His artwork still hangs in the Pentagon.

Albert Michini passed away in 1994 but his legacy lives on in the still vibrant works of art that hang on the walls and rest on the bookshelves of his children, grandchildren and countless Americans.

Editor's Note: We featured another of Al Michini Sr.'s paintings in our April 2019 issue, online at CyclingUtah.com, cyclingutah.com/issues/2019/april-2019/cycling-west-and-cycling-utahs-spring-april-2019-issue-is-now-available/

Sunrise at Snowbasin – The Bicycle Art of Mindy Larson

The Bicycle Art of Darrell Driver

Sunrise at Snowbasin – The Bicycle Art of Mindy Larson

The Bicycle Art of Darrell Driver