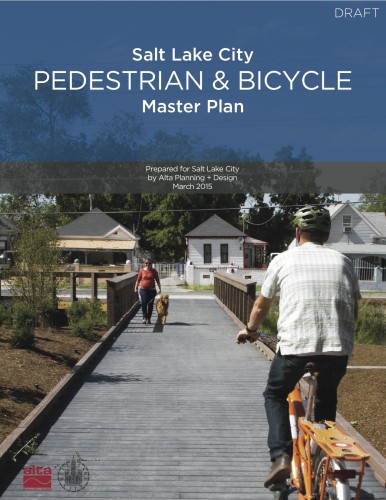 December 1, 2015 – The Salt Lake City Council will hold a public hearing today on the proposed update to the Bicycle and Pedestrian Master Plan. The draft plan is the result of two and a half years of hearings, public comments, stakeholder meetings, and revisions. Cyclists are encouraged to attend the public hearing to comment on the plan.

The public hearing will take place at 7 pm in the City Council Chambers on the third floor, 451 S. State Street, Salt Lake City, Utah, 84111. The Council is tentatively set to vote on the plan on December 8, 2015.

The agenda for the December 1, 2015 council meeting is here: http://slcgov.iqm2.com/citizens/FileOpen.aspx?Type=14&ID=1122&Inline=True

The Public Agenda packet with a current draft of the plan, and memoranda is here: http://slcgov.iqm2.com/citizens/FileOpen.aspx?Type=1&ID=1122&Inline=True

The current draft of the plan is here: http://walkbikeslc.com/

Note that there are some final changes that are not yet incorporated in the draft plan document. These are in the memorandum from the Transportation Division to the City Council dated November 20, 2015. These can be found in the Public Agenda Packet above.

The final changes include:

Opinion on the Pedestrian and Bicycle Master Plan 2015 Update (by Dave Iltis):

I would like to encourage all cyclists to support the Salt Lake City Bicycle and Pedestrian Master Plan update. Please do come to the public hearing today. Please do comment in support of the plan either in person or via email. The plan has been refined considerably since the initial drafts in 2014. Many changes have been incorporated including the additions of a bicycle data program, bicycle theft reduction program, speed limit policy, the Great Salt Lake Marina bike route, and other changes. The plan is a solid document that will help to improve and guide bicycling in Salt Lake City over the next 10-30 years. There are many great aspects in the plan such as a low stress bikeway network in the downtown area that includes 300 S and 200 W protected bikeways as the backbone.

The plan has significant changes and updates from the 2004 Bicycle and Pedestrian Master Plan.

Please do support the update.

Previous articles and comments on the Bicycle and Pedestrian Master Plan:

Rally for a Safer Wasatch Blvd in Salt Lake County on...