“Mayor’s Bike to Work Day is a great opportunity to get out and enjoy a beautiful spring morning on two wheels,” Mayor Biskupski said. “The ride will promote fitness, clean air, community building, bike safety, and celebration of the new bike park and the sights of Salt Lake City.”

The Bike to Work Day route will feature the 9 Line corridor along 900 South and protected bike lanes in downtown Salt Lake City.  A police escort will assist with the crossings of busier streets and TRAX routes.

The 900 South Bike Park is an enhancement of the community-created 900 South bike pump track, now adding larger jumps and practice areas for BMX and mountain bikers.  A bike park is the bicycling equivalent of a skate park.

Arrive by 7 a.m. and enjoy complimentary snacks, coffee from Badass Coffee, music provided by Power 94.9, community booths from our event partners, and a demonstration from riders at the newly constructed bike pump track. A donation bin from the Utah Volunteers of America will be accepting donations at the event that can provide youth with any biking related items, sunscreen, lip balm, and bug spray. The bike ride to the Salt Lake City and County Building begins at 8 a.m.

For more details on the event and the bike route, please visit: 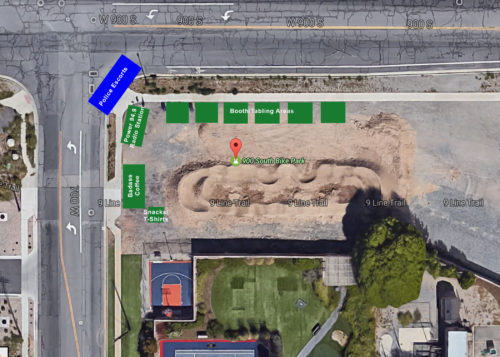