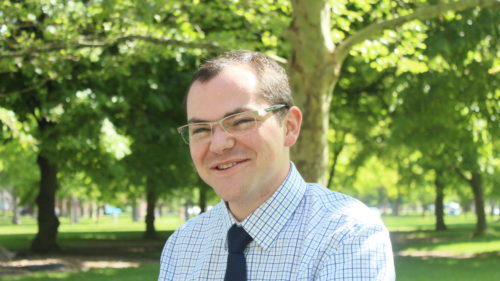 Background: Cycling is a healthy and fun form of transportation and recreation that improves livability, health, and economy in Salt Lake City. We ask these questions to provide information to Salt Lake City’s citizens regarding your outlook on cycling. We will publish the answers on CyclingUtah.com as we receive them.

Candidate Information: Please provide your name, contact info for your campaign, council district (describe too) and if you like, a brief statement regarding your candidacy.

As an avid cyclist myself, I know there are many ways we can improve Salt Lake City’s bike environment, both for commuters and recreational cyclists. For commuters in our city, there are two main obstacles: crumbling roads and poor access. We must increase funding to repair our roads if we want to prevent serious accidents for our cyclists. In addition, we must create clear East-West routes for our West side communities to cycle across (either above or below) I-15. This will enable more of our residents to gain quick and cheap access to downtown using bikes rather than cars. For our mountain biking communities, this issue is more complex. Because there are relatively few mountain bike trails within city limits, much of the impact the city council can have on this area will be by leveraging their relationships with other levels of government like Salt Lake County and the State Legislature. My background in the legislature makes me uniquely qualified to advocate for an expansion of designated trails up and down the Wasatch front as well as an expansion of mass transit services to these trails.


The two biggest threats to our cyclists are road hazards and poor city planning. While the city has come a long way in the last decade in creating bike friendly routes, many areas are still isolated. Because of I-15 it is very difficult to ride from Rose Park, Glendale, or Poplar Grove to the rest of the city. This makes it far more difficult for our west side communities to use bicycles safely on their commute and makes it almost impossible for them not to own a car. Creating clear East-West Corridors that connect to the Jordan Parkway would create a safer and easier commute for many of our cyclists.

We also have to take a hard look at our road infrastructure. As our roads deteriorate, potholes become a major threat to cyclists. I have multiple friends who have been seriously injured after encountering a pothole on their bike. We must ensure that our bicycle lanes are kept free from debris and other hazards. Whether from the July floods that broke tree limbs and washed garbage and soil into our streets or from our neighborhood cleanup collection, we have to keep bike lanes open and safe.

Additionally, we must expand our efforts to tackle bike theft. It is too easy for thieves to quickly sell stolen bikes and move on to their next victim. I have had my bike stolen out of my own backyard while locked up. I will push for an increase in SLCPD’s bike licensing drives, which also give away high quality locks and lights.

In District 5, I would like to see better bike routes on the western side of our district. Although our Eastern streets like 1100 E and 900 E make commuting easier for my neighborhood, there is an increasing need for better bike routes the further west you go. It is difficult and unsafe to cycle on State Street or 300 W, but many cyclists are left with few alternative options. We must also expand the number of East-West corridors in District 5 to connect our district with our neighbors.

I support the creation of safe bike lanes on State Street. In my discussions with the Planning Division, they have a variety of possible street configurations that would achieve this. They need our input as residents in order to choose the plan that best suits our needs. We must remain engaged in this process as a community and make our voices heard, and I think the role of the council is to facilitate that discussion in order to come to the best possible solution. We have a unique opportunity to model what State Street can be to the rest of Salt Lake County, and we should not waste it.


I have always greatly admired the work of the Bicycle Collective, especially their Earn-a-Bike program, which exchanges community service for affordable transportation for our youth. I think there is room for similar programs to encourage community engagement and public service across many of our city departments. I would support creation of grant funding subsidize the creation or continuation of such programs.

As a former U of U student, I always found the bike maintenance stations around campus to be very convenient. I support the creation of similar stations to repair and maintain bikes across Salt Lake.


While I support the goal of the Complete Streets Ordinance, I feel that the exemptions created are so broad that almost any project can escape its rules. Copenhagen has 37% of its commuters using bikes, and they got there by creating a process for urban planning and construction that required the city to prioritize inclusion of bicycles in its transportation network. I don’t believe that every street needs bike lanes, but I do think that there should be a good reason for streets not to have them.


I support the 10,000 Wheels for Affordable Transportation initiative, and I am committed to its full implementation in Salt Lake. However, in order to complete the full roll-out of this program, we need the cooperation of many other governments across the Wasatch Front. For the school programs, we need the help of local school boards. For the mass transit component, we need the buy in of State-level entities like UDOT and UTA. For the Bike Transit for Clunkers program, we need funding from the State Legislature. My background with the legislature gives me the relationships needed to ensure cooperation and collaboration among this diverse group of stakeholders.


As a recreational cyclist, I think that creation of a comprehensive network of easily accessible trails in our city is an excellent initiative. This policy failed the last time it was brought before the council, but I think that it is time for a second look. In order for the initiative to succeed, we have to bring the entire council on board. I am committed to working towards this goal.


By strengthening our complete streets ordinance, we can ensure that more vital projects are included as we maintain our city streets. I will push for funding for this ongoing maintenance as well as new projects.


I am a cyclist; my current bike is a black Specialized Hardrock mountain bike. In the past, I used my bicycle to commute to and from the University of Utah. In fact, I did not get my driver’s license until after I graduated because cycling and mass transit were an effective alternative to owning a car. Although I don’t use my bike to commute as much now, I still use it to get around when possible. My paniers make it easy to make quick trips to the store, and I love biking to the Liberty Park and Downtown farmers markets. For recreation, I love to ride the Jordan River Parkway and the Bonneville Shoreline Trail here in Salt Lake City. I also lave the Rail Trail in Park City.


I want to thank Cycling Utah for taking the time to send this survey. Your organization’s collection of public advocacy resources for cyclists is top notch, and it enables many of our residents to have a voice in a process that can sometimes be very Byzantine. See you on the road!